When artificial breeding is best: Case of the wood bison 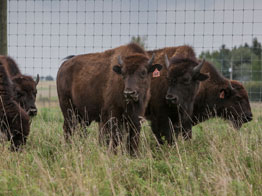 There are of two main types of bison in North America: plains and wood. Wood bison were hunted nearly to extinction, then registered as "threatened" in the 1960s. They were bred back to plains bison to increase their numbers. Unfortunately, the sperm of these breeding animals carried serious diseases (deadly tuberculosis and endemic brucellosis, which can cause miscarriages) that can also be transmitted to humans.

Using assisted reproductive technologies like cryopreservation, artificial insemination, and embryo transfer, Agriculture and Agri-Food Canada (AAFC) scientists and their counterparts at the Western College of Veterinary Medicine (WCVM) in Saskatoon, Saskatchewan are helping both the bison population and the industry itself.

Dr. Gregg Adams, of WCVM, has devised a way to "wash" these pathogens from embryos using enzymes. Once washed, embryos will no longer carry the diseases. The regeneration of a larger, healthier population of wood bison will happen more quickly through embryo transfer. This kind of genetic conservation is not something that could be efficiently done by nature alone.

Freezing semen for use in artificial insemination and embryo transfer is a common method to conserve the male genetics. Conventionally, semen is frozen in a medium containing either egg yolk or milk. However, there are biosecurity risks in using these animal proteins. This is a concern for countries looking to improve their herd’s genetics, as they do not want to import potential biosecurity hazards.

Dr. Anzar’s lab developed a clean technique in which the egg yolk or milk component has been totally excluded from the medium used for semen freezing, which makes the sharing of diverse wood bison genetic material easier. Currently, this new technique is only being applied for the conservation of bison and bull semen, but it has the potential to be applied elsewhere, thus improving the international exchange of genetic material across numerous fields.

Improvements in the genetics of wood bison will continue, thanks to the ongoing work of this AAFC-WCVM partnership, the Ministry of Agriculture (Government of Saskatchewan), and the Saskatchewan Bison Association, as well as the willingness of private bison producers to continue their support. 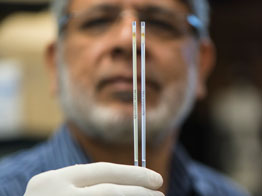 "At this moment, pathogen-free conservation of wood bison genetics is the most crucial issue in bringing the number of wood bison up. The successful conservation of the bison species and exchange of germplasm within and between countries will ultimately benefit the growing bison industry."
– Dr. Muhammad Anzar, Research Scientist (Cryobiology), Agriculture and Agri-Food Canada