Since 1989, our mandate has been to help move research to market and grow biobusiness in the province. A not-for-profit, membership-based company, Ag-West Bio members include public research institutions, private companies (from start-ups to multinationals), research service organizations, economic development and commodity groups. Members represent the biotechnology, bioproducts and biofuels, environment, health and nutrition sectors.

Our networking events, conferences and seminars help the bioscience community stay connected and informed. We lead delegations to relevant international conferences, and help arrange meetings for incoming delegations interested in doing business or finding partnerships in Saskatchewan. Ag-West Bio also participates with like-minded associations from across Canada in creating awareness of the bioscience industry.

As Saskatchewan’s bioscience industry association our mandate is  “To provide leadership, as a catalyst, to link existing capabilities and resources in order to strengthen the bioeconomy industry in Saskatchewan.”

We grow biobusiness in Saskatchewan. 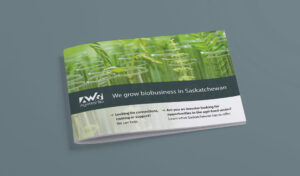 In the ’80s, the biotech industry was emerging in Saskatchewan. The provincial government and the University of Saskatchewan decided a catalyst was needed to accelerate the growing ag-biotech sector.

In 1989, Ag-West Biotech was launched by Saskatchewan’s Ministry of Agriculture, with a mandate to provide leadership and assistance for Saskatchewan’s ag-biotech cluster, aiding in the commercialization of new biotechnologies, helping existing companies grow, and attracting new companies to the province.

Ag-West Biotech amalgamated with the International Centre for Agricultural Science & Technology, absorbing the ICAST investment portfolio in 1997. A re-organization in 2004 saw Ag-West Biotech merge with two complementary provincial associations: Bio-Products Saskatchewan and the Saskatchewan Nutraceutical Network. Ag-West Bio emerged from the amalgamation with a focus on commercialization of biological applications in agriculture, environment, industry, energy and bioprocessing, as well as nutrition and health.

Since its inception, Ag-West Bio has assisted numerous companies start-up or relocate to Saskatchewan. Ag-West has also helped Canada’s regulatory system keep up with advances in biotechnology, and worked to educate the public through various publications, a website, workshops and seminars. From 1998 to 2004, Ag-West operated the Saskatchewan Agricultural Biotechnology Information Centre (SABIC), a hands-on teaching lab that was open to the public.

Today, our focus is on business development and assisting companies with commercialization of new technologies. To support the industry, we also partner with like-minded organizations to promote bioscience through public outreach.

A few of our past initiatives

PIC is an industry-led alliance of private-sector companies, academic institutions, and other stakeholders across Western Canada, aimed at fully developing the potential of plant-based proteins from crops such as canola, pulses, grains, hemp, and flax. PIC’s work focuses on improvements and opportunities in crop breeding, crop production, value-added processing, and export development.

Ag-West Bio played a significant role in developing the PIC proposal, and we continue to partner with PIC to grow Saskatchewan’s capabilities in the plant protein sector.

National Products Canada (NPC) was created in 2016 as a Centre of Excellence for Commercialization and Research. Ag-West Bio is a founding member and serves as the Western node (NPC-West).

Partnering with a wide range of private and public investors, experts, and organizations, NPC creates a unique commercialization system to help companies and researchers address the many factors involved in bringing high value products to the marketplace.

Canada’s Prairie Provinces and the American Midwest have a huge capacity for growing plant-based proteins. Pulse acreage in Canada is increasing (peas are at more than four million acres and growing); Saskatchewan is the largest producer and exporter of lentils in the world; canola contains excellent protein in the meal; and soybeans are grown extensively in the US, with shorter season varieties grown in Canada.

Seeing this important opportunity, a group of industry, research and policy leaders from the US and Canada, which included Ag-West Bio, came together in 2016 to determine the best way to enable innovative agricultural technology solutions from plant proteins. The Protein Highway was officially launched at ABIC 2016 in Fargo, North Dakota.

Accelerating on the Protein Highway

In 2017, a paper was produced by the industry members of the Industrial Bioproducts Value Chain Roundtable that outlined priorities and recommendations as input to a national policy agenda in support of the industrial bioproducts industry. Canada’s strong agriculture sector, scientific and commercial research capacity, highly educated population, and robust entrepreneurial communities together present myriad opportunities for Canada to be a global leader in the innovation, manufacture, consumption and export of value-added bioproducts. The industrial bioproducts industry will help to drive clean job creation and economic growth in Canada.

Ag-West Bio aims to strengthen Saskatchewan’s role as a global leader in agricultural bioscience. To measure growth, we had to first establish a benchmark, so in 2014, we created the Bioscience Scorecard. This measured the size and scope of Saskatchewan’s ag-bioscience R&D efforts through a survey, direct interview and focused research and analysis. We were happy to report that a vibrant, robust cluster exists, and continues to grow!

In 2012, Ag-West Bio completed an economic evaluation of drop-in aviation biofuel, focussing on Brassica carinata and Camelina sativa. The report provides an overview of the dynamics affecting the potential development of camelina and carinata-based bio-jet fuel production in Saskatchewan and offers insights into the opportunities and challenges for industry stakeholders.

Common interest to study the opportunities in the sustainable biofuel sector in Canada and Europe resulted in a joint research project between Ag-West Bio and the Netherlands consulates in Saskatoon and Vancouver.

Both organizations are in a unique situation. Ag-West Bio has the network, knowledge and capacity to support the development of new sources of sustainable biofuels. The Netherlands is located in a strategic position as Gateway to Europe. With expertise in the field of transportation and logistics, and the available infrastructure in the Port of Rotterdam and airport Schiphol Amsterdam, the Dutch have the capability to bring Canadian biofuels to the European market.