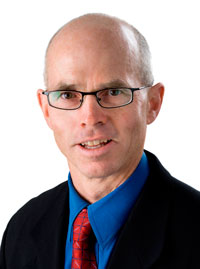 Agricultural research means new crop varieties with improved drought and cold tolerance, better pest control and a better understanding of agronomy. For producers, this translates to fewer hours and less fuel used in the field, resulting in better soils, higher quality products – and greater profits. Through the Western Grains Research Foundation, western Canadian farmers can have direct input into determining how ag-research dollars are spent.

With just six employees, Western Grains Research Foundation is a small organization that has had a big impact on agricultural research. Garth Patterson became Executive Director of the organization in August, 2011, after 16 years at the helm of the Saskatchewan Pulse Growers. He says more than 100 new wheat and barley varieties have been developed using WGRF funds, estimating that about 70 per cent of the wheat and barley acres grown in Western Canada are planted with those crops. Western Grains Research Foundation has been funding research projects in the three Prairie Provinces for 25 years. Research funds are from three sources: The first two are the Wheat Check-off and Barley Check-off funds, which come directly from producers and are used solely for variety development. Patterson says even though producers are allowed to opt out of the check-offs, the majority – around 95 per cent – choose to support the fund. Another source of funding is the WGRF Endowment Fund. The initial $9 million seed money came from the discontinued Prairie Farm Assistance Act in 1981.

The fund grew substantially in 2000, when the Federal Government chose the WGRF as the organization to manage excess funds after the revenue cap governing the Canadian railways was set. In the years the railway companies exceed the revenue cap the overages are transferred into WGRF's Endowment Fund. In 2008 $67 million was added to the Endowment Fund in a onetime adjustment to the hopper car maintenance portion of the revenue cap formula. With the fund at about $90 million, the organization uses the interest generated to make annual research investments. Patterson says by 2012 they hope to be investing about $5 million a year. To date, the Endowment Fund has provided more than $26 million for over 230 projects across a number of different crop types. “We are the primary funder of wheat and barley variety development in Western Canada, along with western Canadian provincial governments, and of course Agriculture and Agri-Food Canada,” says Patterson, “We also see a wonderful opportunity to start partnering with private industry.”

One of Patterson’s goals is to develop what he terms ‘3-P’ partnerships: public, producer and private industry working together. Researchers who receive WGRF funding are often able to use it to leverage provincial and federal funding. WGRF funding decisions are truly farmer-directed. Producer representatives fill 15 of the 16 seats on the Board of Directors, along with one non-voting advisor from Agriculture and Agri-Food Canada. The board looks at the benefits to Western Canadian farmers, relying on advisory committees made up of industry experts. “Ultimately, the decisions are made by the board,” says Patterson. Changes are coming to the WGRF decision-making process. In an effort to set research priorities, after consultation with agricultural and producer groups across western Canada the board identified six strategic research areas (called Directed Research Programs or DRPs).

In those areas WGRF will do targeted calls for proposals. This affects the Endowment Fund only; the wheat and barley check-offs are negotiated directly with the institutes conducting the breeding, such as Agriculture and Agri-Food Canada and the Crop Development Centre at the U of S. Also new to WGRF is a $100,000 scholarship coming out of the Endowment Fund. Starting this year in Manitoba, the scholarship will rotate each year through the Universities of Manitoba, Saskatchewan and Alberta. The universities can award the scholarship to either one PhD student or two Master students. “We think it’s a good way to attract bright young minds into agriculture,” says Patterson.

One of the largest opportunities for WGRF, according to Patterson, is to increase wheat production in Western Canada by making it a more profitable part of crop rotations. “That’s important to be sustainable, both economically for farmers, but also environmentally, from a soil health perspective. It’s well established that a good crop rotation of cereals, pulses and oilseeds is sustainable.” Although overall wheat acreage is still higher than other crops, it has been in decline.

Wheat research, says Patterson, hasn’t kept up with crops like canola and pulses. “What we’re seeing now is canola and pulses have become generally quite profitable for farmers and wheat has been relegated to more of a rotation crop in many cases. I believe wheat hasn’t been given the research push that other crops have had. That’s about to change, we hope.”

WGRF’s target is to get $100 million annually into wheat research. Right now that is closer to $20 million. In comparison, Australia is $80 million, with the US investing $50 million each year. Corn and soy in the US is around $600M and $300M respectively. Canadian canola research is around $80M. Ag production has become a skill-based industry, highly capitalized with highly skilled farm managers. Patterson says producers understand the importance of research. “They see first-hand how the new varieties perform in their fields.” http://www.westerngrains.com