A full slate of scientists speaking on a wide range of topics under the banner of “Partnerships in Research” drew the large crowd to the ranch from across all three prairie provinces. Paul Johnson of the Saskatchewan Ministry of Agriculture’s Regional Services Branch, helped Tim Oleksyn, chair of the WBDC Strategic Advisory Committee, open the event, along with two members of the Termuende family – Bob Termuende and Scott Schultz, who attended the day’s events.“This is an important event for the Regional Services Branch, and the Ministry,” Johnson stated. The Ministry of Agriculture has funded more than 50 per cent of the WBDC’s organizational, project specific and strategic program costs, providing more than $2 million in operating costs, and an additional $1.8 million to project research funding over the past five years. 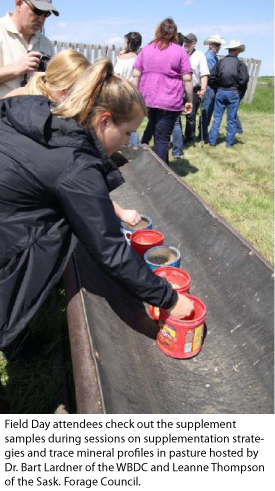 “The Ministry does this because we know the work of WBDC is important to the future success of the livestock industry,” Johnson said. “A growing livestock industry in Saskatchewan will help capture the opportunities and meet the challenges of a growing province.”

“The work done at WBDC will help Saskatchewan create viable solutions to feed a growing world, in an environmentally sustainable way that results in safe food, responsibly produced,” Johnson added.

Paul Jefferson, Vice President of the WBDC, was happy with the attendance at the Field Day, and with the interest the crowd showed in the various sessions. “A large number of young people attended the Field Day this year,” said Jefferson. “That just goes to show that there’s a bright future for the beef industry in this province.” There was definitely a sense of youth to the event this year, noted Tim Oleksyn. Scattered among the all-ages crowd were some young producer families, and young research scientists. It was satisfying to see both producers and scientists in attendance, he noted. “Events like the Field Day allow producers and scientists to mingle, which is good for both sides,” Oleksyn said. “The scientists find out the questions that producers need answered, and the producers are able to take the research and put it to work on the ranch.”

The keynote addresses by Dr. Kendall Swanson and Dr. Kim Ominski were very well received by the crowd. Dr. Kendall Swanson of the Department of Animal Science at North Dakota State University spoke to reproductive success in young beef cows. According to Dr. Swanson, reproductive performance is the single-most important factor contributing to profitability in the cow/calf sector, and nutrition and management programs are key in maintaining a successful breeding program. Sustaining reproductive success is often the most challenging in young cows, but nutritional management throughout the year plays a key role in successful pregnancies for young cows. 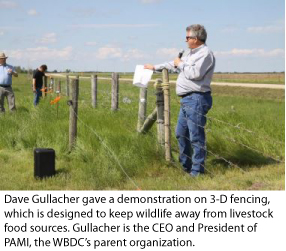 Dr. Kim Ominski of the University of Manitoba spoke to the cost of extreme weather on breeding cows. Her presentation demonstrated the importance of adequate nutrition during the overwintering period, particularly during the last few winters where cattle producers have been faced with extremely cold temperatures. Proper management of cow nutrition during gestation can improve performance of the calf prior to weaning but can also impact performance long after. Her presentation included data from national surveys, comparisons between drylot and extensive overwintering systems, and changes in nutrient requirements for cattle as temperatures drop.

The afternoon tours showcased field research being performed by WBDC and its partners.

Information was presented on RFID tag retention, hay sampling for feed quality, supplementation strategies on pasture, trace mineral profiles in pastures, the impact of high rainfall on pasture quality, SafeGuard trial findings, and a demonstration of 3-D fencing designed to keep wildlife away from livestock feed sources. A research update on beef and forage projects from the Alberta Livestock and Meat Agency, and a look at animal health wrapped up the day.

More information on the day’s sessions can be found at www.wbdc.sk.ca.