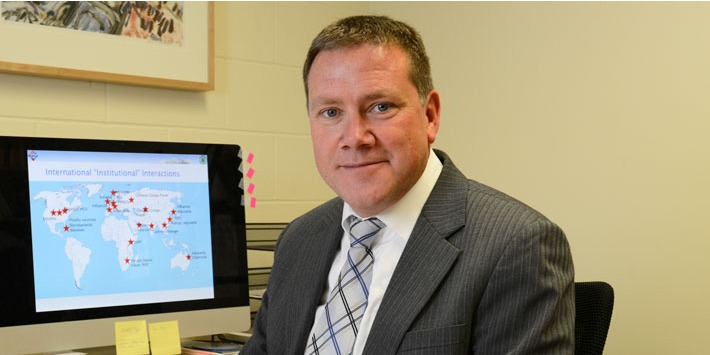 Following an international search, Dr. Volker Gerdts was selected as the new director and CEO of the University of Saskatchewan’s Vaccine and Infectious Disease Organization-International Vaccine Centre (VIDO-InterVac).

Gerdts, who served as VIDO-InterVac’s Associate Director of Research for the past 11 years, succeeds Dr. Andrew Potter as the organization's fifth director.

Gerdts has led numerous international projects, including a Grand Challenges in Global Health project funded by the Gates Foundation, and was integral in the development of two new animal vaccines. As director, he plans to advance VIDO-InterVac’s scientific excellence, international reputation and commercialization efforts in infectious disease research and vaccine development.

“VIDO-InterVac is a global leader,” Gerdts said. “With some of the best minds and most advanced infrastructure in the world, we have the opportunity to make VIDO-InterVac the world’s premier research institute for emerging diseases.”

He noted that the addition of the containment level 3 in 2011, and the scheduled completion of the pilot-scale vaccine manufacturing facility in 2020, VIDO-InterVac will soon be able to make and test vaccines for humans and animals truly enabling ‘solutions through research.’

Gerdts received a Doctor of Veterinary Medicine from Hanover Veterinary School in Germany and a PhD equivalent from the Federal Research Institute for Animal Health on the Island of Riems. He first came to Canada in 1998 as a post-doctoral fellow at VIDO-InterVac. He was hired as a research scientist in 2002 and became an associate director in 2007.

For more information about the new director and VIDO-InterVac please visit www.vido.org.