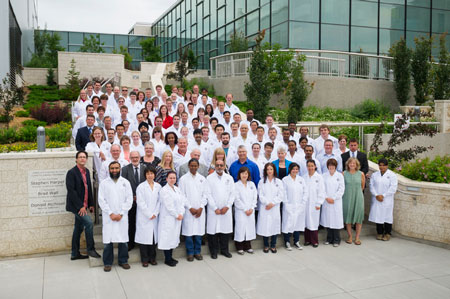 New vaccine research and development against existing and emerging diseases can now proceed thanks to final certification of the Vaccine and Infectious Disease Organization’s International Vaccine Centre (VIDO-InterVac) at the University of Saskatchewan (U of S). “This project is a collaborative effort among many partners, who all deserve our heartfelt thanks,” says Director Andrew Potter.

“Scientists at InterVac will work at the forefront of efforts to combat human and animal infectious disease threats,” she says, adding that the work at VIDO-InterVac will create new knowledge, education and training opportunities in what the University refers to as its ‘one health’ signature area of research. InterVac, a $144-million expansion to VIDO, is one of the world’s most advanced, containment level three vaccine research centres and one of the largest of its kind. It is the product of a funding partnership among the Government of Canada, Canada Foundation for Innovation, Government of Saskatchewan and City of Saskatoon, with support from the U of S.

InterVac provides facilities for scientists to safely conduct research into level-three diseases like tuberculosis, hepatitis C, HIV/AIDS, avian influenza, as well as prion diseases, like mad cow disease and chronic wasting disease in elk and deer. Babiuk says the facility will help stimulate national and international collaborations, as scientists from across Canada and around the world will be able to use the facility. Bob Clarke, chair of the board of VIDO-InterVac, says the new facility helps keep Canada on the forefront of discovery science. “We are excited to witness the contribution this facility will make to advancing human and animal health to the benefit of Canadians and internationally.”