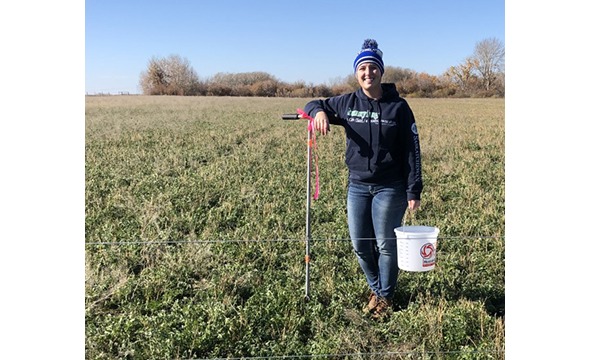 Using two years of data from summer grazing at the Livestock and Forage Centre of Excellence, Master of Science candidate Cassidy Sim is looking at how well new forage varieties persist when grazed at high stock density, which varieties are preferred by the cattle and how the temperament of the animals influence their grazing behaviour.

It’s an ambitious, multi-faceted project for Sim, who is co-supervised by Dr. Bart Lardner (PhD), professor in the College of Agriculture and Bioresources’ Department of Animal and Poultry Science, and Dr. Diego Moya (DVM, PhD), assistant professor in the Western College of Veterinary Medicine’s Department of Large Animal Clinical Sciences. Plant scientist Dr. Bill Biligetu (PhD) and animal scientist Dr. Gabriel Ribeiro (PhD) are the other USask faculty members involved in the study.

“Some farmers use continuous or rotational grazing just like their dad or grandpa did, but more producers who are trying to expand their farm’s management practices are looking at intensive grazing with high stocking density on the pasture. They’re using forages in a different way, but we don’t have the actual research to show how the forages hold up under this intensive grazing,” said Sim.

(You can watch a longer interview with Cassidy, also on YouTube.)

Not unlike beef producers in their operations, Sim had to take into account the amount of rainfall when conducting her research.

In the summer of 2019, 69 steers grazed once from July 27 to Aug. 15 for a total of 19 days. The 69 were divided into three groups and each group grazed a 13-acre block with 14 different combinations of forages. Three varieties of alfalfa and one variety each of sainfoin, meadow bromegrass and orchardgrass were blended to form the 14 combinations. With more rainfall in the summer of 2020, Sim managed 149 steers with 49 or 50 in a block. The animals grazed twice from June 26 to July 14 (19 days) and then from Aug. 27 to Sept. 4 (nine days).

In both summers, steers in each block were identified as either bold or shy based on behaviour studies conducted prior to the animals being turned out to the paddocks. In 2019, Sim labelled six steers in each block according to temperament and, in 2020, she increased that to 16 animals per block.

Sim combined real-time observation, driving up and down the alleyway next to the paddocks and noting which animals were feeding and where in the blocks, with drone footage.

“It was really fun to do this research. I’m a little sad that we’re done the summer work. The drone is newer technology, at least to us. It was really helpful, but it was also really fun,” she said.

Because the 14 different treatment combinations of forages were seeded in strips that did not have fencing, the cattle were free to move from one forage type to another. As she analyzes her observations, she will identify which forages are preferred and determine whether bold animals make better use of the pasture by moving throughout the entire area.

The final piece of Sim’s research will be an economic analysis that reflects the cost of seeding, forage yield and intensive grazing in Saskatchewan.

“We will be able to make recommendations based on what we saw, which of these forage varieties are most persistent, effective and efficient. It’s information that producers are asking for. They will see something useful come out of this research.”

Sim’s research is being funded by Saskatchewan’s Agriculture Development Fund.

Sim, who grew up in Vanguard, Sask., and graduated from Outlook High School in 2015, is aiming to finish her master’s thesis by the summer of 2021. She is excited to begin the next stage of her animal science career. In the fall of 2021, Sim will begin studying to be a veterinarian at USask’s Western College of Veterinary Medicine.