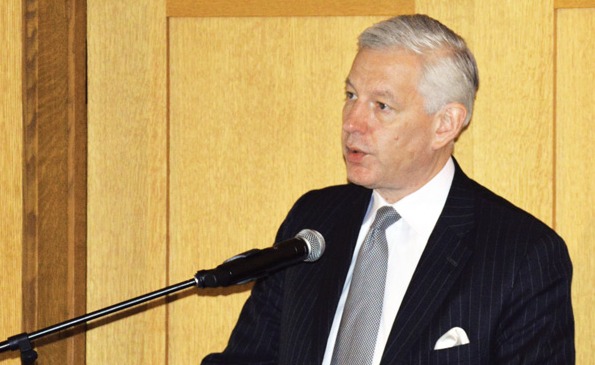 Dominic Barton, global managing partner of McKinsey & Company, and Chair of the Canadian Minister of Finance's Advisory Council on Economic Growth, was invited to Saskatoon last month by Ag-West Bio and Farm Credit Canada to make a series of presentations. His breakfast presentation at Innovation Place focused on the agriculture sector: Agriculture and Food: a vital sector and growth driver for Canada's economy.

The food and agricultural sectors figure highly in Canada’s potential for expansion—especially if we focus on key areas where Canada has room for improvement.

The Advisory Council on Economic Growth developed three reports (commonly referred to as “The Barton Reports”), which outline recommendations to make Canada more competitive in emerging global markets by ‘catching tail winds’ or trends moving in the right direction, such as growth of the middle class by 2.4 billion citizens in the next 15 years, mainly in the Asia-Pacific region and Africa. With that substantial population growth comes a demand for high quality protein in the foods they eat.

The announcement of the pan-prairie supercluster, Protein Industries Canada (PIC), is part of Canada’s growth plan. Barton urged the audience to think of each of the clusters as a national program, rather than a regional one. “We don’t have the scale to have lots of little programs all over the place. We have to focus on a few and really get behind them as a country,” he said. “Of the five clusters identified, two [Ocean and PIC] are very much food related.”

Barton went on to identify some of the key recommendations in the report, outlining Canada’s growth edge in these areas, and highlighting potential in the food and agriculture sector.

Productivity
Canada has been “hitting below its weight in productivity,” compared to the US as well as other much smaller countries, such as the Netherlands. “We don’t process enough. We ship too much of our raw material. We are not doing anywhere near as much as we can as far as value added products,” he said. Barton wants to see Canada doing more processing and exporting consumer products that have been made in Canada.

Immigration
The agricultural industry struggles to find seasonal labour. With our fast-aging population (second only to Japan among the OECD countries), we need to supplement our labour force. Barton recommends economic immigration to increase gradually to 450,000 people a year by 2021, while easing the process for high-skilled and entrepreneurial foreigners to come here.

Automation
“No country is prepared for the disruption that is going to happen in the next 10 to 15 years due to automation,” said Barton. Self-driving vehicles will displace a huge proportion of our workforce, many of whom are in the 45 to 55-year-old age category. “Reskilling needs to happen at scale and should be treated as a capital investment.”

Foreign Trade and Investment
Canada’s foreign direct investment is a quarter the scale of countries such as France and Australia, and those countries don’t consider themselves competitive enough. “This isn’t about foreign owners taking over our companies, but about supporting our research and development.”

“We’ve got to connect with more of the rest of the world. Seventy-five per cent of our trade is with the U.S. and Mexico. We need to connect with China, India and Japan.” While he recommends working toward free-trade deals with them, there are steps we can take to build relationship and market products right now.
Shanghai, for example, is a city of 24 million people—a population larger than Canada’s. “We can begin at the city-state level as well as the national level and cultivate relationships with leaders in these cities.”

Deregulation
Regulation has a direct effect on business investment and growth. So much of existing regulation is old and no longer fit for purpose. “We believe deregulation should be done by sector—in Ag and Food, what is getting in our way? What can we do to become more competitive?” Barton asked.

Innovation
Canada “punches above its weight” in terms of research, says Barton, “but we lag in commercializing our ideas.” In Ingenious, a book published by former Governor General David Johnston and Tom Jenkins focussing on Canadian innovations, half of the highlighted innovations are related to the ag-food sector.

Government investment in startups happens in other countries far more than it happens in Canada. Barton suggested that kind of support would help with scaling up our most innovative ideas.

Tax Incentives
Tax incentives are still geared toward old style economics, focusing heavily on equipment rather than human or technology resources. Reskilling people needs to be considered a capital investment. “A lot of investments these days are in technology and software, and we need to look at those as capital investments as well.”

Ambition
Barton identified several countries with far fewer resources than Canada who have much higher levels of productivity. South Korea, for example, has created POSCO, a world-leading steel industry in a country with virtually no natural resources. “What Korea is lacking in resources,” said Barton, “they make up for in ambition. If we could apply South Korea’s ambition to Canada’s agricultural sector, we would be number one in the world.” At the very least, Barton suggests Canada set a goal to be headquarters to 30 percent of the world’s most important companies in the sector.

It’s time to fire up our ambition to unleash our potential, says Barton.

“I hope we are very ambitious about what we do in this important sector. There are so many subsectors to unleash!”