U of S researcher, blogger focuses on sustainable agriculture 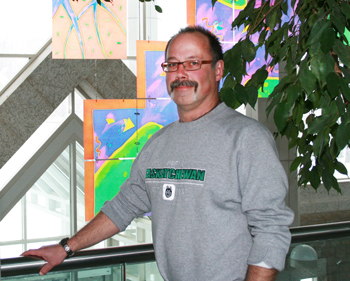 Whether it’s hormones in beef and preservatives in bacon, or pesticides and genetically modified foods, Stuart Smyth at the University of Saskatchewan wants to be part of the conversation.

Smyth, a professor in the Department of Bioresource Policy, Business and Economics, has launched Sustainable Agricultural Innovations and Food (SAIFood), an online blog and Twitter feed aimed at providing science-based information on agricultural biotechnology (agbiotech). Together with graduate student Savannah Gleim, Smyth aims to help provide a sound, fact-based counterbalance to misinformation about agriculture and food.

For example, while there is broad scientific consensus that GMOs are no more dangerous than crops developed through other methods, public fears have driven governments to create onerous regulations and trade barriers that are smothering advances in agriculture world-wide.

“We’ve got technologies, right now, that could make a huge impact, but because consumer acceptance in Europe and in African countries isn’t the same as it is in Canada and the United States, these technologies are not able to be adopted,” he says.

During a previous multi-year project funded by Genome Canada, Smyth came into contact with some of the leaders in agbiotech both in government and industry, and he recognized a place for the formidable array of tools and expertise available at the U of S.

“We worked very closely with Canadian agbiotech firms and started to demonstrate to them the kind of social science capacity we have at the University of Saskatchewan,” he says. He cites strengths in his own department, the Johnson-Shoyama Graduate School of Public Policy and the Social Science Research Laboratory in the College of Arts and Science as a few examples.

“At a lot of other universities in Canada and in the United States as well, there are very good researchers, but they’re typically one person,” Smyth says. “But in Saskatoon, we’ve probably got a capacity of half a dozen to 10 faculty that are working in this area.”

It’s a capacity that helped Smyth leverage backing for his Industry Funded Research Chair in Agri-Food Innovation, which he says is the first of its kind in Canada. It is sponsored by the Canadian arms of multinationals Bayer, Monsanto and Syngenta, as well as industry and farm groups CropLife Canada and SaskCanola. The Global Institute for Food Security and the U of S are also partners.

While there are some efforts to provide science-based information to the public by individual scientists and organizations, he says they are still few in number and often drowned out by purveyors of misinformation who have already staked out their online turf.

“As an agriculture industry, we’ve been very slow to engage in social media, to provide a factual counterbalance for those people who are seeking information,” he says. “People realize when they go to a social media site it may not be the best source of information, but they struggle to find a trusted source.”

Smyth explains that incredible changes and advances have happened in plant breeding in the past two decades, and they’ve occurred much faster than public scientific literacy. Combined with exponential advances in communications technology and a vast gulf between rural and urban populations, these factors have created an enormous challenge, one with the highest stakes.

“If we don’t (adopt new agbiotech) – responding to the Food and Agriculture Organization’s challenge in 2008 on how to feed a world with nine billion people – we’re going to fail.”

This article was first published in U of S On Campus News. Republished with permission.