U of S Industry Liaison Office: Research should benefit society 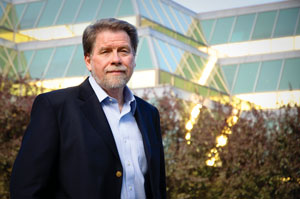 Glen  Schuler is managing director at the U of S ILO

Publish or perish is a well-known phrase in academia. It refers to the pressure for researchers to continuously publish academic work in order to progress and be recognized in their field. Glen Schuler, managing director at the University of Saskatchewan’s Industry Liaison Office (ILO) says publishing is just one way for researchers to make their mark. Although he believes basic research is important, he says scientists can have a real impact by bringing their research to market. The ILO’s vision is to accelerate the commercialization of the University’s research and knowledge: “We want the technology to go out to benefit society.”

A good example of this is the circovirus vaccine for swine, developed at the U of S Western College of Veterinary Medicine. The technology has proven to be a game-changer for the hog industry. “Some breeders say that particular technology reduced mortality rate of hogs by 10 per cent,” says Schuler. The ILO works with researchers to find the technologies with the best commercialization potential, then either license it to an existing company, or under the right circumstances, help start a new company. If it’s a single use technology, Schuler says they try to license to a mature company. “If you put that technology into a start-up and it doesn’t work, they don’t have anything to fall back on.”

Platform technologies that can generate many products are a safer bet for start-up companies. Schuler says all the companies the ILO has started recently have been platform technologies. An example is Prairie Tide Chemicals, founded by Martin Reaney at the College of Agriculture and Bioresources. The company is using a platform technology based on isolating high-value cyclic peptides from flax. Peptides, currently synthesized and expensive, have numerous uses, from industrial products to cosmetics and medicines. Reaney’s technology will make these peptides available at a much lower cost – a boost for the flax industry. In other cases, licensing to a mature company is the best strategy.

At the College of Engineering, Hui Wang, Ajay Dalai and Jianguo Zhang developed a catalyst used to transform carbon dioxide and methane into syngas, a feedstock for producing gasoline and other fuels. Their catalyst offers high conversion rates without carbon buildup – extending the life of the catalyst from 40 to 2000 hours – a huge breakthrough in the industry. The ILO brokered a deal to license the technology to California-based Carbon Sciences, a company that was searching for a solution to carbon deposits that were fouling their own catalysts.

With success comes revenue. Schuler says the ILO licenses or assigns all the technology – either to an existing company or to a start-up. Income comes from milestone payments from start-ups, or from royalties, a percentage of the gross revenue. Royalties generally run at around three to four per cent. The inventor gets 50 per cent of the net revenue from the license, while the other half goes to the University.

Typically, in all North American universities, only about three per cent of patented technologies make it to the market. This can be a financial burden since patenting cost at the front end of a project is picked up by the ILO. “We’re the ones who have to protect the intellectual property – we also have to pay for the protection of that IP.” A patent comes with a hefty price tag – about $100,000, an expense that is not recovered until after the product makes it to market. Due to a mismatch of when patenting cost are incurred vs. being recovered currently, patent costs at the U of S are about a half-million dollars a year with about $200,000 recovered per year.

To ease the burden, the ILO negotiates with the licensing companies to pick up the patent cost. The ILO is also increasingly careful about what technologies they consider upfront, taking a much harder look at the Reports of Invention (ROIs) brought to them by the researchers. “If we don’t really see a clear path to market, we are leaving the invention with the researcher.” They also revisit the patent portfolio regularly. If they review a technology and decide it is not marketable, they bring it back to the researcher, who then has the option of picking up the fees and continuing on their own, or letting the patent lapse. Sometimes valuable technologies that have been sitting on the shelf are discovered during portfolio reviews. In one example the researcher who developed a tomato variety was concerned that there was no market pickup.

The tech transfer officer saw potential for the product and put together a marketing strategy. He identified all the groups worldwide that might have interest in the product, and created a contract for non-exclusive licensing, which was then sold in a number of countries with non-conflicting markets. The technology went from essentially returning nothing, to generating around $50,000 in the past year. Schuler gives credit to the tech transfer officers working at the ILO who are assigned to specific colleges and work closely with the researchers.

Increasingly the tech transfer managers are working with the researchers very early on in the development of their projects. They sometimes help scientists with advice on how to adjust their research so there’s more commercial potential. Schuler says the ILO officers have great depth of understanding of the industry, a good knowledge of what companies are operating in their area and what technologies they might be interested in. “We’re not just going out there and shooting across the board.” The ILO works hard to make fair deals, and Schuler says a collaborative approach has served them well, evident in the number of return customers. By determining their customers’ research needs during the process of commercializing a technology, they can build long-term relationships where there is an on-going flow of technology. They may give up a little bit on the commercial side if they can see a clear path on the research side, and long-term customers sometimes get a preview of a technology coming down the pipe.

Entrepreneur in Residence An ILO initiative, the Entrepreneur in Residence (EIR) program is in its second year (In 2011, the Computer Sciences hosted Dale Lemke, president of Display Systems International). This year, the College of Agriculture and Bioresources, along with the Western College of Veterinary Medicine host Michael Chubb, General Manager of Saskatoon Colostrum Company. The ILO has approached this a little differently than at other universities; rather than embedding the EIR in the tech transfer office, he is located right at the college, where he can get to know the students and faculty. “We want the Entrepreneur to be a part of the college where he can encourage budding entrepreneurs, direct them in one way or another, talk to them from the position of having gone through it.” Sometimes the Entrepreneur finds added benefits to working closely with the researchers, discovering a technology that they are personally interested in.

More work ahead Schuler says there are a couple areas where improvement is needed to increase the chances of success for the University of Saskatchewan start-ups. The first is incubation space. Innovation Place has offered to work with the ILO to find space for some start-ups. As well, an organization called Ideas Inc. has incubation space, but with the sector growing, Schuler says more space is needed. The other area that needs work is very early stage funding. “We’ve got entrepreneurs; we’ve got favourable systems across the rest of the innovation cycle, but we need more money at the early stages of company development before angel and venture capital is available.”

He says they are working on developing a system to help companies make it through the stage beyond start-up, until they are investment ready, noting the Ag-West Bio Commercialization Fund is helpful, but more is needed. The ILO has the Forge Ahead Fund that he says they are looking at expanding. Schuler says he’s fine with researchers who only want to publish, but he’s very happy if they decide to commercialize, and the more basic research that happens, the more marketable technology there will be. He says market pull is great, but sometimes the ILO has to let people know about innovations that might not be so obvious coming out of the University. “There are going to be times when you have to go to people and say ‘you really need this product’.”