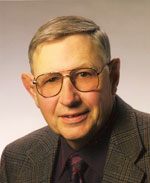 This piece is not just about agriculture but includes the broader scientific community.

I see trouble brewing in science and fear that research funding will be further cut, to the detriment of our long-term health and welfare.

You have all seen the picture of the elephant with a few folks scattered around the various parts describing what the beast looks like. Nobody stands back and describes the whole beast. And that is because they get rewarded for picking ever smaller pieces of the elephant and studying it in ever more minute terms.

The funding system drives the piecemeal research reports. Our National Research Councils give funding only to those folks who publish lots of papers. Post docs and grad students are hired to do pieces of work to get more papers published so they can get more money so they can publish more papers so — you get the picture. If you don't play the game, you don't get the money.

The piecemeal approach encourages short-term work — do just what is required to pump out another paper. In agriculture we must have longer-term studies to know what kind of path we are putting ourselves on when we change practices. That kind of work must be funded by us all — by government. Industry is not going to do it, and for the most part universities have not been noted for it (plant breeding is an exception).

Research has been more of a federal issue than provincial, although provincial governments do fund a lot of university research.

So, that leaves the feds. I must admit to not fully appreciating federal long-term crop rotation research until recent summaries of decades of work have given us serious soil fertility lessons. Case in point: federal long-term studies at Swift Current show that phosphorus fertilizer recovery in grain is 98 per cent over the long term. In dry climates, nitrogen fertilizer recovery in grain is over 100 per cent. (That is because free-living nitrogen fixation, lightning and other factors are enough to support 15 bushels per acre in the long term with no added nitrogren fertilizer.

With thousands and thousands of research papers published, massive quantities of data are produced and far fewer people take the data and boil it down to what it means to society. And, that is why our politicians are getting tired of pouring ever more dollars into producing ever more data.

"Drowning in data and starving for information," is a quote from Weyburn farmer Norm Flaten that I have used often.

A solution looking for a problem

Some of the really high priced equipment can lead to a solution looking for a problem. The University of Saskatchewan has a Synchrotron. A scientist may say, "Maybe I will work the weekend when beam line is available. If I'm lucky I might get a paper out of it."

Hmmm… Maybe we have a problem here. Please do not get me wrong — fancy equipment has done many good things for society, but it is not all gravy. And, when first discovered, lasers were a solution looking for a problem!

The governments that provide the money are looking for real solutions to real problems. All of my research at U of S was of that variety. But if all research was of the type Les Henry did in his heyday, we would be dead in the water down the road. Many of the problems I was happy to solve were solvable because of the basic research done by my colleagues. Their counsel was (and is) invaluable. I still rely greatly on colleague Dr. Eltje deJong (soil physicist) to help understand soil moisture.

We need a balance of folks: some that look for an answer for the sake of an answer, but also folks that can do something with that answer.

When you get disgusted with funding cuts for research, think about where the decisions are made. Mostly by bureaucrats.

The politician says, "Cut your budget." The bureaucrat says, "Hmmm… I'll cut that 'stuff' that doesn't produce papers so I can continue to get all that NSERC (National Science and Engineering Research Council) money to continue to publish papers to continue to…" You get the picture again.

There are those that read this that will say it is just sour grapes from a tired old fossil who never published much anyway. And it is true — I published very few papers and some of them were very long. I would have been much better to chop them up into smaller parts — five short papers rather than one long paper. But I refused to play the game, and managed quite well.

My dismal publication record was why I self published Henry's Handbook of Soil and Water. It will soon go to a third printing, and not a nickel of government money in it — all paid for by you folks who shell out good money to buy it. Thank you very much.

So, when you see research funding cuts, think about how the decisions are made and urge our politicians to take a close look at how the system really functions.

This article was first published in AGCanada.com Grainews and re-posted with permission.
Les Henry biography