The torching of transgenics 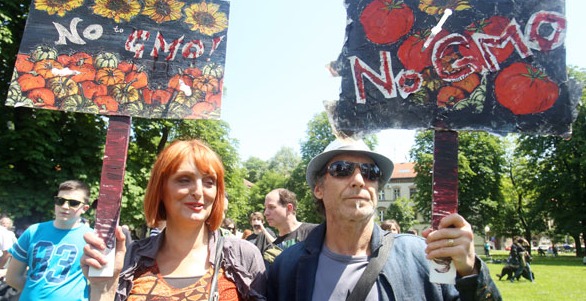 About 25 years ago, when I was still in what I call my “idealistic young idiot” stage, I was excited to learn about a new technology – transgenics – that was just beginning to be applied to agriculture.

Just imagine! Researchers had figured out how alter the genes of a plant so it could withstand a broad-spectrum herbicide. Farmers could plant their crop, wait for it to come up, then spray it. The weeds die; the crop thrives. Better yet, the herbicides chosen were the most benign yet developed, breaking down and quickly becoming inert in the environment.

For some crops such as corn and cotton, researchers had even managed to incorporate a bug-specific, but harmless-to-humans, pesticide right into the plant, eliminating or greatly reducing the need to spray insecticide at all.

For crops such as canola, this meant eliminating several trips across the field, spraying different products to control different weeds. It meant reduced fuel and equipment costs for farmers – plus fewer diesel fumes put into the air. Naturally, I thought environmentalists would love it.

Environmentalists have excellent values that I share and indeed are hard to argue with. Clean water, clean air, plentiful natural spaces for wild critters and for people to visit to renew their spirits – what’s not to like? Environmentalists want to protect nature and the planet, and ostensibly love practices that help us tread more lightly on the earth that sustains us. Simple, yes?

Have I mentioned my stage of life at the time? That I was perhaps a tad naïve? Nothing in life is that simple. I had no idea that environmentalists would vehemently reject this new technology and begin a campaign to stamp out transgenic crops world-wide, no matter the cost. I was also witnessing the birth (or growth) of an industry: the monetization of fear. Greens for greenbacks.

Over the years, activists leveraged a favourite tactic, the “mind bomb” – imagery designed to elicit disgust and loathing. A quick online image search of “GMO” will yield a horror show gallery of corn with teeth, syringes poking tomatoes, and zombie kids eating GMO corn while men in white lab coats and business suits cackle with evil glee in the background. Activists tore up research plots dressed in white protective suits and masks to better get across the message of danger, destroying years of publicly funded research in the process. They demonized corporations, and eventually anyone, working to develop transgenic crops.

Governments, beholden to voters, responded to public concerns, in this case with ever-more-onerous regulations. This had the effect of shutting out public research and development in government and university labs that couldn’t afford to bring their innovations to the public. Biotechnology and genetics professor Alan McHughen, in his 2000 book Pandora’s Picnic Basket, includes a photo of the few sheets of paper required to register a conventional flax variety beside the pile – easily 15 cm thick – required to register a transgenic variety.

Over the years, the war for public opinion has raged. Corporations have been blamed for making numerous public relations blunders. True, but it ignores the fact they have been attacked by activists and mistrusted by a deeply suspicious public for years. The more they tried to defend themselves, the more they were demonized.

Scientists have been blamed for not explaining themselves better, which is also only partly true. Scientists are professionals in their field; they are not professional communicators. Worse, those who are actually good at communicating and dare to speak in favour of trangenics have been, and continue to be, the target of vicious personal attacks by activists that have weaponized Freedom of Information legislation.

It would be nice to believe environmental activists are well intentioned, that they genuinely believe they are fighting the good fight and defending the world from big corporations and mad-scientist hubris. And perhaps many of them are.

But there is a saying: when words and action disagree, believe action. Activist actions have been to oppose transgenics tooth and nail, despite all evidence, rather than change their minds. Ever.

It seems environmental activists would rather let children in developing countries go blind and die than admit transgenic rice or bananas could help them live more normal, productive lives. They would rather condemn farmers to poisoning from using backpack sprayers to apply insecticide by hand rather than admit transgenic eggplant could eliminate the need to spray at all.

Activists would rather force farmers in the developed world to spray their potato crops time and again with harsh fungicides than allow those farmers to use transgenic varieties that would – ironically – allow a more organic approach.

There have been hopeful signs. After many years, the first transgenic food animal, AquaBounty’s salmon, is now available in select locations. Simplot’s non-browning GMO Innate potato and Okanagan Specialty Fruit's nonbrowning GMO Arctic apple are starting to appear on North American store shelves. Even more hopeful is that prominent environmental activists can, in fact, change their deeply held beliefs.

I would like to think, as people begin to get used to these products on their store shelves, they will become less susceptible to activist fear-mongering. But I’m not as naïve as once I was.

A powerful new suite of tools, CRISPR gene editing, is rapidly coming on stream. It and other genetic technologies have vast potential to improve human health, improve agriculture and help preserve the wild spaces we all love and value.

We need to be ready. We need to make strategic and strong investments in communications. This means providing the resources to act proactively to inoculate the public against false and inflammatory information. It means providing training to scientists and hiring dedicated, specialized science communicators to support them. These communicators will need ample resources to respond to fear-mongering campaigns, in real time, across multiple channels.

Twenty-five years ago, we got caught flat footed; we didn’t expect the backlash. This time we’ve got no excuse.

Michael Robin is a Saskatoon writer who has been writing about biotechnology for more than 20 years.