The TOR protein: Plants made for the environment 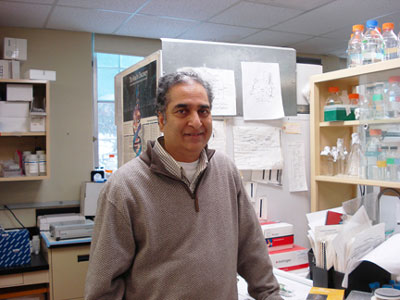 Canada’s challenging growing season may be no match to Canadian research. Thanks to exciting findings by Dr. Raju Datla, a senior research scientist at the National Research Council (NRC) on the University of Saskatchewan campus, we may one day be able to develop crops tailored to environmental conditions.

Dr. Datla came to Saskatoon from India in 1985, to work as a post-doctoral research scientist at NRC. Throughout the years, Datla’s research has moved from plant genetics and molecular biology to genomics and seed development. He keeps busy supervising an active laboratory consisting of four post-doctoral researchers, two technicians, and one summer student. The productivity of the Datla lab has resulted in very interesting findings related to how plants might sense their environment and change growth processes accordingly.

Datla’s lab is currently investigating the role of a protein called TOR (Target Of Rapamycin) in plants. TOR is a protein kinase – an enzyme that transfers phosphate groups to proteins, resulting in modification of a protein’s activity. TOR was first discovered in a mutant strain of yeast that was resistant to the immunosuppressant drug rapamycin, and has since been found in all eukaryotes, including mammals. The function of TOR has been studied extensively in yeast and animal systems where it acts as a regulator of cell growth, development and in response to environmental factors, such as stress and nutrition. In plants, functions of TOR are less understood, although emerging research

suggests it may serve as a link between environmental cues and growth processes in these systems as well.

By manipulating TOR expression and observing the resulting phenotypes (observable physical characteristics resulting from the expression of a gene), Datla is hoping to find the key to producing plants for specific environments.

Datla’s laboratory has been working to clarify and confirm the function of TOR in plants by manipulating the gene responsible for its expression. Using the model plant Arabidopsis thaliana (common name thale cress or mouse-ear cress), Datla has found that both deletion and over-expression of the gene are lethal to the plant. With expression levels of TOR between these extremes, Datla has observed several phenotypes. For example, when TOR expression is increased 20-30 times above that of wild-type, the plants grow faster and flower earlier. Datla has extended these techniques to crop plants, including canola. “One of the interesting phenotypes we observe in canola is that it flowers early and it matures early, so overall the life span is reduced by about 10 to 15 days. That has implications, especially for our Canadian conditions,” he says.

Reducing the life span of these crops would be desirable – but only if the yield is not compromised. So far, according to Datla, it appears not to be. In fact, in arabidopsis, seeds appear to be 10 to 15 per cent larger than wild-type seeds. The mechanisms behind these findings have not yet been established; however, it appears these plants are better able to respond to environmental cues.

Research on TOR in plants may also benefit human health. Rapamycin inhibits TOR activity in humans and other eukaryotes (excluding plants) and is used as an immunosuppressant in treatments for a wide range of human diseases, including cancer. Datla says it may be possible to use genetically altered plants to screen for other natural products that also target TOR and are more effective and/or cause fewer side-effects than current treatments.

While research on TOR function in plants is still behind similar research in yeast and animals, it is catching up, thanks to an increasing number of researchers jumping on board. Datla currently collaborates with researchers in Ottawa at Agriculture and Agri-Food Canada (AAFC). He has also received many requests from other researchers for the plant lines he has developed, since the TOR protein is large and not easy to manipulate. These collaborations will likely result in many more avenues of research to advance the critical knowledge on TOR in plants, bringing us closer to the day when crops may be optimized for adverse environmental conditions.