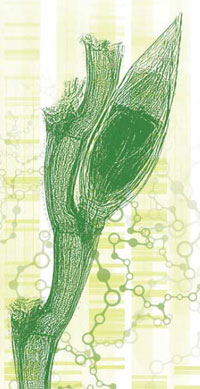 Over the next 50 years, farmers will need to grow more food than has cumulatively been grown since mankind emerged.

While the first Green Revolution radically boosted crop production, we’re in need of another big boost. A technology with significant promise to help with that boost may surprise you: imaging.

Research in genomics over the past 20 years has provided the foundation for the next big technological advancement. Ag-West Bio President and CEO Wilf Keller explains, “We now have the basic genetic blueprints of many plants, thanks to genomics research. But genetics are only part of understanding what happens in plants. Phenotypes—how plants express genes as height, maturity time, resistance to disease, and number of seeds, for example—is just as important."

Until now, imaging tools have been used primarily for human health applications. With Saskatchewan’s proximity to the agricultural sector, the research cluster here has turned its attention to potential applications for animals and plants.

Plant breeding has been an analog activity since the beginning of agricultural practice. Maurice Moloney, executive director and CEO of the Global Institute for Food Security (GIFS) says, “If we can digitize images of plants and crops, instead of humans having to do the analysis visually, we would have a trait-based database that could interface with these powerful genome sequencing tools that are already in place.”

“People often don’t fully appreciate how the combination of high-performance computing and agriculture will change how we do things. The farmer’s field will become more and more electronic in many ways. It already is, with GPS, but to get the full value of this interface we shall need to use imaging technology. Eventually, we should get to the point where we can look at a genome and predict how the plant will grow.”

An impressive selection of tools Saskatoon’s world class agricultural research infrastructure is well known. The potential to apply these tools toward plant imaging is just beginning to be explored.

Robert Lamb, executive director of the CLS says, “We have developed these imaging tools in these amazing facilities. They didn’t develop the technology for plants originally, but now we can apply all these tools to the plant world. You can see more than the shape of a plant; you can see it alive, in situ. You can see chemical interactions in real time.”

At the Sylvia Fedoruk Canadian Centre for Nuclear Innovation, Executive Director Neil Alexander says the new cyclotron is open for business. The cyclotron produces radio isotopes, and many of the most commonly used elements in plants, such as carbon, nitrogen and oxygen are easy isotopes to make and use. “We basically attach a little light to an atom, and that light flashes once. When it flashes we can see where it is and how it is being used,” says Alexander. There is untold potential in relatively unexplored areas of research, such as the study of plant roots. Buried in soil, roots and their behavior have not been studied in situ. “We can light those roots up,” says Alexander, “and we can watch real time processes like water movement and nitrogen fixation.”

While many researchers are focused on imaging of individual plants, others are turning to the fields to explore opportunities for plant imaging. The land surrounding the University of Saskatchewan (U of S) and Innovation Place is another priceless piece of infrastructure.

Steve Shirtliffe, a professor in Plant Sciences at the U of S, is working closely with a local unmanned aerial vehicle (UAV) production company, as well as data processing companies, to build capacity for imaging from UAVs from the ground up. He says, “The UAV imaging industry has a problem with being able to cross reference their images with ground truthing. At the U of S, we have tens of thousands of acres of ground-truthed fields, and now we can compare that to what we can see from the air.”

Studying crops in their true environment ensures the most accurate measurements. Fieldscale research is another aspect in the trend towards phenotyping. The UAV research program at the U of S is just getting off the ground. “We want to see what we can see,” says Shirtliffe. “Are fertility requirements being met? Can we determine input optimization in crops? Are producers getting optimum plant populations? And how does that affect their yield?”

A golden opportunity
In July, Saskatchewan’s existing research infrastructure received an unprecedented boost when the Canada First Research Excellence Fund awarded the University of Saskatchewan $37.2 million over seven years—the single largest federal grant ever received by the university— to establish a Phenotyping and Imaging Research Centre.

The research will involve multidisciplinary teams across the U of S campus and around the world, under the leadership and management of GIFS. “The success of the project really relies on a multi-disciplinary approach,” says Maurice Moloney. “We will have a team that comprises computer scientists, mathematicians, physicists, engineers, and plant biologists. You’d think you’d mainly be studying plants, but really the focus is on number crunching. There’s already a lot of talent here in our community, but these opportunities will be a magnet for more talent.”

Paul Babyn, head of the Department of Medical Imaging at the U of S, agrees: “We’ve gone from concept to reality, getting the infrastructure and the people on the ground who know what to do with it. We also have more people coming, now that the cyclotron is up and running, including a nuclear physicist who will be working on plant imaging and detection.”

Wilf Keller adds, “It’s a strong example of what you can accomplish when you pull together a truly multi-disciplinary team to work together to understand plants and plant processes.”

The U of S team and other research teams around the world are all trying to solve the issue of a phenotyping bottleneck in the research process. Researchers are producing data faster than they can process it, and they often lack computing tools designed to analyze data quickly and efficiently into a usable format. The funding will help to build a research platform that takes a systematic look at digitizing plant images and making them searchable. The project will begin by creating a methodology and data standards for storing mathematical descriptions of phenotypes that can then be cross-referenced with genetic databases and tested to determine whether predictions of plant performance can be made.

Further research will be undertaken to explore what kinds of information can be gathered with all the imaging tools at our disposal, as well as developing some portable options that can bring imaging equipment right into the fields.

A global challenge
Creating databases of plant phenotype information in line with genome databases is a monumental task. Other countries, including Australia and Germany, have research institutes already devoted to the effort.

International cooperation is key to evolving the knowledge of plants far enough and fast enough to respond to our global food requirements. “This challenge requires international collaboration,” says Moloney. “Within a few years, we will be able to make the information that we uncover available to anyone in the world. Other groups may be able to contribute to the knowledge base as well. That means that developing countries will have better tools for plant breeding.”

From the cellular and molecular level to the analysis of fields and the growing environment, phenotyping and analysis through highthroughput imaging will provide a depth of knowledge we could once only imagine.

Keller sums it up: “Imaging is another technological layer that we are superimposing over all the other tools we have; this will give us a more scientific basis for our decisions.”

This article is from AWB's 2015 Annual Report. Click here to view the full report.