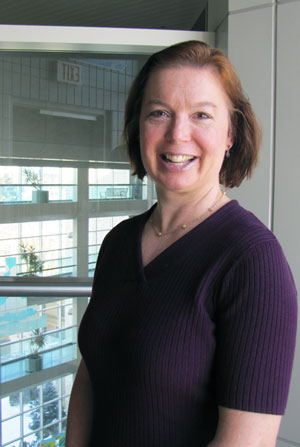 Colleen Christensen, Executive Director of the Feeds Innovation Institute at the U of S

If your great-grandfather was a prairie farmer, he likely put his cattle out to pasture in the summer and cut hay from prairie grasses for feed in the winter. The pigs were fed kitchen scraps and farm waste. Today, feeding livestock has become incredibly sophisticated, with knowledge of nutrition, genetic research and new feed ingredients available through the process of creating bioproducts – materials, energy or chemicals made from renewable resources.

The Feeds Innovation Institute (FII) in the College of Agriculture and Bioresources at the University of Saskatchewan helps Saskatchewan companies work out the details of turning the residues left from the process of developing bioproducts, into high-quality animal feeds that add another stream of revenue for the business.

FII is a not-for-profit ‘public-private partnership’ between the U of S, the Saskatchewan Ministry of Agriculture and Ministry of the Economy, along with private industry with a mandate to develop the animal feeds industry. The Institute emerged from a reorganization of the Prairie Feeds Resource Centre in 2006.

Dr. Colleen Christensen, Executive Director of FII since its inception, proudly points out that the commercialization institute is one of a kind in North America – a portal to connect industry to the expertise and infrastructure of the University. As comfortable in a board room as at a lab bench, experience in both science and business has prepared Christensen for her role at FII. Her interest in the business side of science was piqued when a company spun-off from research that was being carried out in the U of S lab where she was working on her PhD.

She has been involved in tech transfer and commercialization ever since, including managing The Saskatoon Colostrum Company and working in business development at the Canadian Light Source, before taking the helm at FII. “I’ve always really loved getting science out into the real world.” The Institute currently has just two full-time employees, Christensen and a technician, but staff numbers expand and shrink according to the type of projects underway.

FII revenue comes from large-scale projects that require the development of research networks, as well as client service fees from small companies who might need help from a nutritionist or chemist, or other expertise available at the University. FII links the companies to these human resources, as well as to U of S research infrastructure. Christensen has calculated that in its seven years of operation, FII has made over 3500 of these connections.

The non-profit status doesn’t prevent FII from bringing money into the U of S. In fact, the organization recently hit a milestone by reaching the million dollar mark in private money for fee for service work. And those million dollars, Christensen notes, are laid on top of $7 million in publicly funded, network type projects. The money that comes in rolls back into services, hiring people, buying equipment, or helping the renewal and sustainability of the Institute.

In a quick history lesson, Christensen says the feeds industry began to develop as the volume of animal production increased. It became more important to manage the animal’s nutritional needs, both for the health of the animals and for economic efficiency. The first big breakthroughs were in the ‘60s and ‘70s, when feed grains became part of livestock diet.

Another factor was the death of the Canadian Crow Rate – when Canadian Pacific Railway subsidies were removed, encouraging more value-added processing of ag products, and resulting in more by-products that needed to be used in order to complete the value chain. The U of S has a rich history of working with Saskatchewan companies as they develop products. One example, Christensen says, is when PoundMaker AgVentures at Lanigan started an ethanol plant along with its feedlot in the ‘90s.

The Department of Animal and Poultry Science helped them figure out how to appropriately feed the by-products to the cattle. “By appropriately, I mean that it met the nutrient requirements for the animal as well as not having too much waste go into the environment.” Appropriate feeding means optimum input and reduced output. It’s a combination of chemistry – whatever the feedstock is – as well as the biology of the animal. “If you are not quite sure about your supply of ingredients, you’ll feed more; so it means more manure, more urine, and a heavier nutrient load going into the environment, than what it could be.” FII enlists the services of chemistry labs and smaller processing labs on the U of S campus to help companies develop the best mix for their feeds.

When the product is ready to be scaled up for animal trials, production begins at the FII’s Canadian Feed Research Centre (CFRC), a processing mill located near North Battleford – and the only facility of its kind in Canada. The feeds can be tested on a wide variety of animals on the Saskatoon campus, including dairy and beef cattle, swine, laying hens, broiler chickens and fish. The CFRC mill has both a 3-tonne/hour and a 20-tonne/hour line. The smaller mill has numerous types of equipment that allow for a wide range of research. When a company is ready to scale up, the large mill has the capacity.

“The real key,” says Christensen, “is that at 20t/hour you can do field trials, not just the smaller trials with the animals housed at the Saskatoon campus.” She notes that the animal industry is well supported at the U of S. “Nowhere else in North America are they building a dairy barn, a new feed mill, and a feed lot. So you can see how well these things are working together.”

When a client comes to FII for assistance in developing feed as a revenue stream, Christensen first works to understand the company; what do they have, in terms of primary products and feed potential, and what type of solution do they need? Is it something relatively simple, like a work product, an applied project, or is it a discovery-based project?

“If a company is really looking for discovery science, we connect them with a researcher, as well as the Office of Research Services at the University. But if it’s a very applied, small, specific project, then we can run them through a contract system that I have set up, ownership of the intellectual property and confidentiality is ensured, because the client is paying full cost of the work that is done.”

Helping companies navigate the regulatory side of commercializing feeds is another role for FII. Christensen says people who are coming from areas outside the animal industry, such as engineering or petroleum, may know everything about their primary product stream, but may not realize the complexity, or how many safety procedures are in place within the animal industry. Regulations exist for the safety and welfare of the animals, as well as for the safety of the food system, but terms are sometimes similar but mean different things in different industries, which can make it confusing.

For example, a ‘novel’ food refers to a food that has no significant history of consumption, or the production method for that food, while a ‘novel’ feed simply means it is not listed in Schedule 4 of the Feeds Act. ‘New’ may be a smaller component of a feed, such as an amino acid or binder, rather than the full ingredient. “Once you understand the system, like any stream of the CFIA [Canadian Food Inspection Agency], it’s relatively straightforward.” Collaboration both within the University and the broader agbio cluster in Saskatchewan is important for the success of FII.

The Institute works closely with the U of S Industry Liaison Office (ILO), for example. Clients come from a broad network that Christensen has built over the years; from connections with processors or through other organizations working to develop Saskatchewan’s bioeconomy, like POS Bio-Sciences, the Saskatchewan Food Industry Development Centre, Innovation Place, or Ag-West Bio. Christensen says that when developing the bioeconomy, it’s both economically and environmentally important to use as much of the biological material as possible. Feeds are a key aspect of the bioeconomy, creating sustainable products and sustainable companies.

The development of the bioeconomy also allows for use of more local ingredients. For example, locally sourced canola meal decreases transportation costs of shipping soybean meal from the United States. Saskatchewan’s animal and crop industries have grown up together over the past 150 years, she notes, and the two industries complement each other; a grain farmer might be growing for human food grade, but on average roughly half his crops in a five-year period might only hit feed grade. “That’s where feeding into the livestock industry is so important – so that those crops don’t fail.”

Christensen says there has been a big change in strategy over the past five years towards a ‘systems’ approach to developing the bioeconomy that gives us a unique advantage. Along with the animal units, the chemistry units and the new research feed mill, the U of S also has two research chairs: Dr. Tom Scott, Research Chair in Feed Processing Technology; and Saskatchewan Ministry of Agriculture Strategic Research Program Feed Research and Development Chair, Dr. Peiqiang Yu. “We have more of a feeds critical mass cluster – that combination of crops and livestock chemistry and processing – than anywhere else in North America.” http://agbio.usask.ca/about-us-2