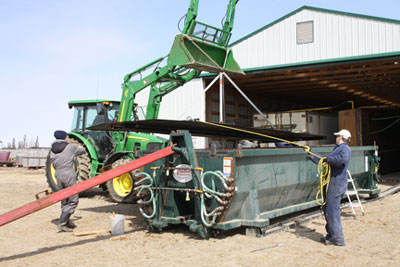 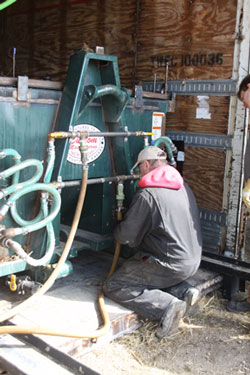 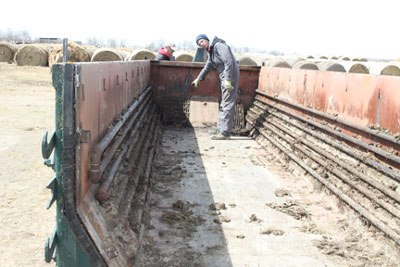 It’s something that farmers and feedlots alike have struggled with forever–what to do with all the organic waste produced by livestock. The current practice is to spread the manure on the land to dispose of the manure and recycle the nutrients. But there are concerns that land application of raw manure may not take full advantage of the nutrients in manure. Is there a better way to dispose of the manure while extracting as much value as possible? Before too long, the Prairie Agricultural Machinery Institute (PAMI) may have an answer to that question; an answer which not only puts the waste somewhere, but puts it to use.

For nearly three years now, PAMI has been researching solid-state anaerobic digestion through the construction and operation of a digester at PAMI’s Western Beef Development Centre ranch near Lanigan, Saskatchewan. PAMI’s pilot-scale Solid-State Anaerobic Digester (SSAD) converts agricultural residue and waste into energy while sustainably managing the nutrients in the waste. “Digestion is a natural microbial conversion process,” noted Dr. Joy Agnew, one of the lead researchers on the digester project. “The digester provides the proper climate for breakdown, and collects the energy-rich gases that are emitted.”

PAMI’s digester currently uses manure from a nearby feedlot, but any solid organic waste could be used. Waste from slaughter facilities, food waste, or even grass clippings could all be digested using this method. Researchers are hoping to introduce new feedstocks to their trials this year, including cull potatoes and wet distiller grains from a nearby ethanol facility.

In simple terms, what happens is this: the manure is loaded into the digester and inoculated with freshly digested material containing microbes to kick-start the entire digestion process. The manure, called “digestate” by researchers, can also be saturated with the liquid produced by digestion (leachate) to achieve the same effect. The digester is sealed, then heated to 38°C and cooked for between 30 and 40 days. During that time, the leachate can be recirculated periodically. Throughout the 30-40 day period, biogas is being emitted into the gas collection system. Once the digestate is done “cooking,” it is unloaded, and the process starts all over again. Using manure to produce energy isn’t a new idea; however, using solid manure to do so is relatively unique at the moment. Most other digesters, including those located all over Europe, use liquid material like swine manure.

PAMI’s goal in their research is to determine the most practical and efficient way to digest solid biomass. This and the leachate circulation system in the PAMI digester make it quite rare, and put PAMI at the forefront of this technology. It took a while to refine the design of PAMI’s digester. Originally, plastic bags held the digestate. The bags were then stored in a shipping container for secondary heating and security. However, the bags proved to be difficult to seal and were easily damaged. Soon, researchers started to look for alternatives to the bags. What they came up with as a solution in the spring of 2012 were large waste management tubs. The tubs were modified and custom-designed lids were added. The tubs improved heating, sealing and gas collection, and simplified loading and unloading.

As they continue with their research, Agnew and the other PAMI researchers working on this project plan to install equipment that will use the gas collected by the digester. That gas could heat a boiler that could heat the reactors themselves, and also run an engine to produce electricity, or be upgraded to natural gas and pumped into the provincial grid. The solid material left after digestion is at least as useful as the gas collected from the process. The digestate is rich in nutrients and more stable than undigested manure, and can be applied to land as a fertilizer.

Researchers will also evaluate the benefits of composting the solid material and compare the nutrient values of raw, digested and composted manure. The value of the solid leftovers from digestion is considerable. Researchers have done some rough calculations on the profit that could be made by selling digestate that has been composted. They believe that by bagging and selling the material as a domestic fertilizer for a dollar a pound or more, assuming a profit margin of just 10 per cent, $6.9 million could be made by digesting and composting half of the manure available from the nearby feedlot each year. In collaboration with the University of Saskatchewan, a bench-scale solid state digester was designed, built, and operated to assist in research at the pilot-scale facility.

The system mimics the pilot facility as closely as possible, providing liquid recirculation, pressure maintenance, gas collection and mesophilic temperature maintenance. The bench-scale digester has already provided valuable information for the full-scale testing. For instance, researchers discovered that frequent recirculation of the leachate in the digester actually hindered gas production, and that the method of mixing substrates didn’t make a difference in biogas production. Also, the method of inoculation, either leachate or digestate, didn’t significantly affect biogas production.

All of this information is new, and will be extremely valuable for the eventual design of a large-scale solid-state digester. The PAMI team is hopeful that their research and knowledge of operating parameters of a solid-state digester will inspire a manufacturing operation to build them for commercial sale.   visit PAMI's website