Send in the drones

by Kris Foster, University of Saskatchewan 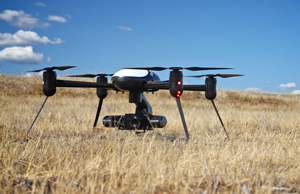 Tiny helicopters flying over crop fields may become a common sight thanks to a research partnership between the University of Saskatchewan (U of S) and a Saskatoon-based company.

Drones outfitted with a specialized camera will enable agriculture producers to get real-time information on the health of their crops and improve management practices, explained Gordon Gray, professor in the U of S College of Agriculture and Bioresources. Gray has a background in photosynthetic florescence imaging of plants, and all it took was a phone call from Draganfly Innovations Inc. last year for the idea of using drones or unmanned aerial vehicles (UAVs) for imaging to take flight.

Draganfly specializes in drone technology and turned to Gray for his expertise in plant imaging. “They said they wanted to meet and explore the potential of imaging crops with these drone helicopters,” he said. The drones, which are small enough to fit in a suitcase when unassembled, were outfitted with a camera “capable of capturing multispectral images,” Gray explained. “Essentially, it measures the reflection of leaves and vegetation in the fields it flies over.”

All plants absorb and reflect light, Gray continued, and by capturing the reflection data, a value called the normalized difference vegetation index (NDVI) can be calculated. The images are then analyzed with Send in the drones software that assigns colours to the values, making the NDVI an effective indicator of plant health.

“If the image is bright green, then the plants are healthy. As the intensity of the colour decreases, then the plants are not growing as well,” said Gray, who used an NSERC Engage Grant to pursue the research partnership. And while the use of this type of imaging is not novel, using drones to gather it is.

“Typically this has been done in the past using satellites or aircrafts,” he said, but those platforms are far too expensive for the average producer. The drones, in comparison, are far less expensive and can also be used at low altitudes—less than 400 feet above ground—which allows them to capture images below cloud cover.

Compared to the old ways of collecting this information, Gray said the remote-controlled helicopters are, other than some Transport Canada paper work, much more accessible for producers who want this data.

“The images from above are quite striking, and we know from our field tests we performed this past summer with colleagues in the [U of S] Department of Plant Sciences and Crop Development Centre that they can collect meaningful data.”

To use the technology, producers would purchase a drone equipped with an imaging camera, map its path using GPS co-ordinates and send it on its way. The resulting images would provide detailed information on plant health, growth and yield.

“We know the images can be used to differentiate crops. When we tested them on representative cereal, pulse and horticultural crops we could detect differences in irrigation, fertilization and disease,” said Gray.

This type of imaging is an enabling technology for a crop management concept known as precision agriculture, he continued. It allows producers to determine if, when and where inputs are required.

“The ability to better target inputs has the potential to enhance both the economic efficiency and environmental sustainability of agricultural production, ultimately improving food security.”

Up, up and away

The Draganfly-built drones have been used for numerous tasks, most notably, in 2013, to find a missing person in the nearby wilderness of Saskatoon following a car accident. The drone used heat-sensing technology to locate the man. It was one of the first times a drone was used to save a life. This past fall, the Draganfly UAV was added to the Smithsonian National Air and Space Museum’s permanent exhibit in Virginia.

This article was first published in University of Saskatchewan On Campus News. Republished with permission.