It’s winter and you’re longing for fruit, but trying to buy as many local foods as possible, so pineapples and mangoes are out. What about sea buckthorn? The bright orange berries combine a tart, slightly tropical flavour with a heaping serving of health-giving vitamins and anti-oxidants. And they grow in Saskatchewan. Sea buckthorn is a deciduous shrub that was originally grown in Europe and Asia. It doesn’t mind a cold climate or poor soil, so it’s found at the foot of the Himalaya, in Siberia – and on the Canadian Prairies. Sea buckthorn has a long and storied history. Ghengis Khan is said to have fed sea buckthorn berries to his army and the leaves to his horses to keep both healthy and strong prior to battle. Tibetan medicinal texts from as early as 600 A.D. refer to the herbal remedies made of sea buckthorn for skin and digestive disorders. The tradition continues.

The Indian Department of Defence recently sponsored a conference on sea buckthorn. They use sea buckthorn in a wide variety of food products – juices, jams, teas and baked goods – to boost the soldiers’ immunity. Clinical trials have shown that the leaves reduce the soldiers’ stress levels and help them to withstand the high altitude and low temperatures in areas such as the Himalaya. Sea buckthorn products are sold at the Saskatoon Farmers’ Market by Northern Vigor Berries, a local family business.

The Strelioff family purchased a farm near Verigin, Saskatchewan, in the late ‘60s. It had been farmed traditionally, but George Strelioff switched to growing alfalfa. He used no chemicals and raised alfalfa leafcutter bees to pollinate the crop. He decided to plant an orchard of sea buckthorn in 1998. “My stepfather is never afraid of a new venture,” says Betty Forbes, President of Northern Vigor. “When he heard about the tremendous nutritional value of sea buckthorn, he was eager to try this new crop.” Along with Betty’s brother, Gregory Bloodoff, they have cared for the crop ever since.

Superfruit Sea buckthorn is a nutritional powerhouse, containing up to 190 bioactive components. It is rich in vitamins C, E and K; carotenoids; antioxidants; and omegas 3, 6 and 7. In addition, all parts of the plant can be used. The berries can be served whole or made into juice. The leaves can be steeped to make tea. The branches and fruit pulp can be used as animal fodder. Russian cosmonauts used sea buckthorn cream to protect themselves from cosmic radiation, and the oil has been applied topically to treat a variety of skin problems, including burns, eczema and poorly-healing wounds. The bark is used in a number of pharmaceuticals.

Growing and Harvesting Sea Buckthorn Sea buckthorn is a tall (6-13 feet or 1.8-4m), hardy bush. As long as there is good drainage, it grows readily and has an extensive root system that fixes nitrogen. It sends out suckers, which could be a problem, but Betty Forbes says that they can be transplanted, thereby avoiding the cost of purchasing additional bushes. The biggest challenge comes when farmers want to harvest the fruit. The berries are tightly packed around the branches and are surrounded by thorns. “The long thorns are very dangerous,” Betty says. “We have to wear protective clothing and even the toughest gloves will only last a few days.” The branches are cut and put into reefer trucks operating at minus 20 degrees Fahrenheit. “They have to be kept really cold because of the high oil content (e.g. omegas 3, 6 and 7) in the berries,” Betty explains. The fruit is then taken to a central cleaning facility where it is cleaned and packaged. 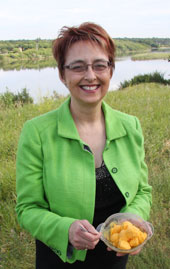 Fruit Products Northern Vigor sells a number of different products. You can purchase frozen berries, frozen or freeze-dried berry purée, tea, fruit leather, or gelato. They go great with breakfast cereal, or in a berry crisp. The tiny seeds add a little crunch and Betty says they are very nutritious. The Outrageous Orange Gelato tastes rich, but it is made with skim milk and is 45% pure fruit. Local restaurants are using sea buckthorn in a variety of ways.

Calories serves the berries in a martini. Truffles and the Saskatoon Club serve a sea buckthorn sauce on duck or scallops; while Museo Coffee adds the berries to scones and spinach salad. The Willows and The Purple Grape in Regina use the fruit in a vinaigrette. Northern Vigor Berries products are currently only available at the Saskatoon Farmers’ Market, but they will soon be available at SaskMade Marketplace in Saskatoon and at Dad’s Organic Market in both Saskatoon and Regina.   Penny McKinlay is a freelance writer from Saskatoon, Sk. Visit her blog: Wanderlust and Words