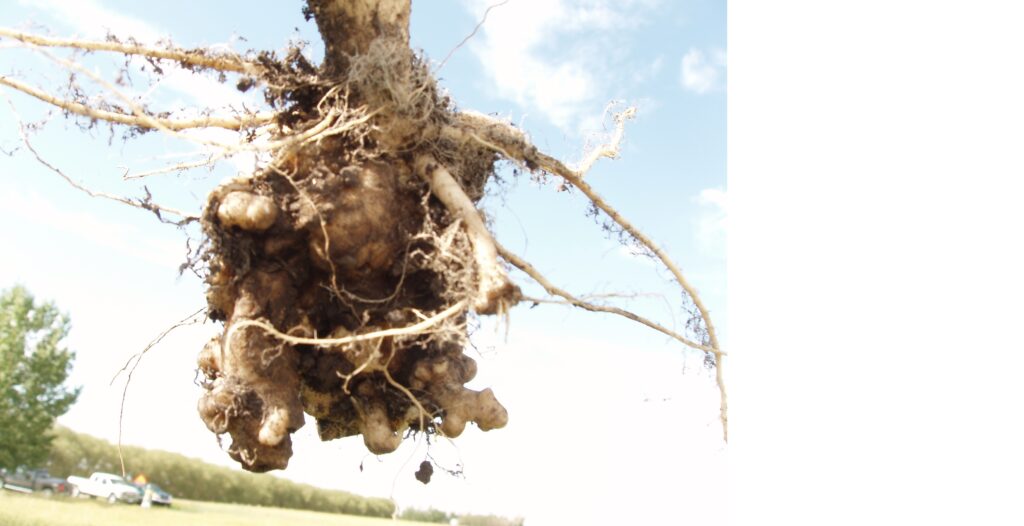 Source to learn more about the genetic resistance to this disease.

Clubroot causes swelling on the canola roots eventually killing the plant. Finding a way for those roots to resist this soil-borne disease is the cornerstone of the strategy for managing the disease, says Gary Peng, a scientist at Agriculture and Agri-Food Canada’s Saskatoon Research and Development Centre.

“The consequences of clubroot in a canola field can be devastating. It can wipe out the whole crop,” said Peng.

The first case of clubroot in canola was reported in 2003 in several fields in the Edmonton area. The infestation spread rapidly to fields north of the city and the disease is now found in more than 2,000 fields in a wide band across Alberta. In Saskatchewan, it was first detected in 2008, but significant evidence of the disease attacking the roots of canola plants wasn’t identified until 2011, according to the Canola Council of Canada.

Canola is the biggest cash crop in Canada. With a value at $27-billion, it’s more valuable than even wheat. Of the 50 to 100 canola varieties available to farmers, only about eight are resistant to clubroot. The resistance genes are often from other members of the brassica family, especially turnips and rutabaga. Farmers and scientists are discovering that those eight varieties are now showing signs of losing resistance.

Peng likens the problem to influenza. Every year, a new influenza vaccine needs to be developed because the flu virus mutates.

“Single gene resistance is not going to be the long-term solution. We need to find new resistant genes and use them efficiently. It is important to have resistance diversity in our arsenal because we know that a single gene will not be long lasting. We need to be more prepared in order to better manage the disease using the resistance strategy,” he explained.

Using the mid-infrared beamline at the Canadian Light Source synchrotron (CLS), Peng examined the roots of canola varieties that were susceptible and resistant to clubroot. He wanted to better understand changes in the composition of the root cell walls to learn how the clubroot-resistant canola roots stopped the disease from affecting the plant.

“The purpose of the research was to help with our resistance strategy to combat the disease by looking at the disease from a different angle to confirm what was initially identified as a mechanism,” said Peng.

Specifically, Peng wanted to learn how the cell walls changed in resistance canola lines developed, in response to clubroot infection.

“The data (collected at the CLS) indicate that several cell-wall components, including lignin and pectin, may play a role in defence responses against clubroot,” wrote Peng in a paper published in the International Journal of Molecular Sciences.

The information will provide invaluable insights as research continues. In the meantime, Peng urges farmers to be vigilant to stop the spread of clubroot. Ensuring equipment is cleaned after it has been used in a diseased canola field, pulling up and disposing of any diseased plants, and seeding clubroot-resistant varieties are some of the recommendations of the Canola Council of Canada.