Saving the bison where they (still) roam 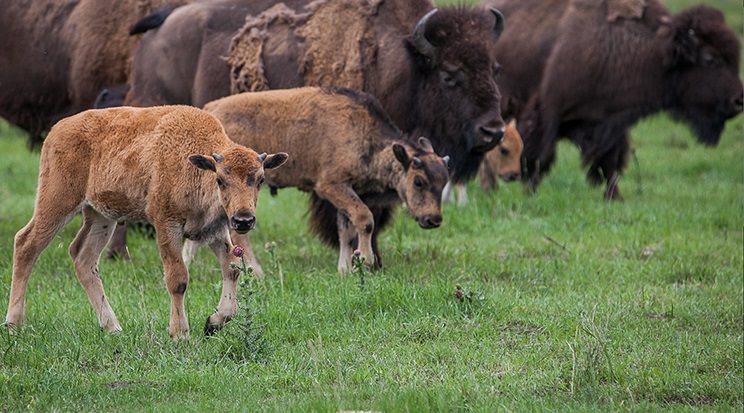 Once dominating the North American landscape, the bison population, both Wood, and Plains, was nearly hunted to total extinction. After more than 100 years of conservation efforts to save the species, the wood bison face another major threat – the spread of disease and a lack of genetic diversity. Now, Canadian researchers, through the Genome Prairie Bison Integrated Genomics project, are working to save the remaining herds in Canada through innovative genome-based solutions.

For those living in the 21st century, it’s difficult to fathom how there once was a time when the bison dominated the North American landscape. The bison reach was once expansive, with herds found as far north as the western Arctic and as far south as Mexico. Its population was once even more impressive. In the early 1800s, the plains bison subspecies, mainly in the continental United States, had a population estimated to be between 30 and 60 million. Meanwhile, the other bison subspecies, the wood bison, had around 170,000 roaming the wilds of what is now northwestern Canada and Alaska.

Some early conservation efforts, however, created more problems than solutions for the dwindling bison population. There is perhaps a no better example than the Canadian government’s transfer of plains bison from Buffalo National Park (once located in central Alberta) to the Wood Buffalo National Park. The transfer resulted in the transmission of diseases from the plains to wood bison and hybridization between the subspecies.

“Mixing the wood and plains bison populations was strongly denounced by conservationists at the time,” said Todd Shury, acting manager of wildlife health and management with Parks Canada and adjunct professor in the Department of Veterinary Pathology at the University of Saskatchewan. “In addition to mixing subspecies, it for sure introduced tuberculosis and may have also introduced brucellosis into the population.”

“This has really been a wicked ecological problem,” said Shury. “It’s led to a legacy of these two diseases that have seriously threatened the Canadian bison population to the present day.”

This ongoing threat of disease and the overall lack of genetic diversity among wood bison represents the backbone of the Bison Integrated Genomics project (or ‘BIG project’). The project is led by Shury (as receptor lead) and Dr. Gregg Adams (academic lead), a professor from the Western College of Veterinary Medicine at the University of Saskatchewan.

“The greatest threat to wood bison recovery is the presence of bovine tuberculosis and brucellosis,” said Shury, who indicated that conservationists have fewer tools to combat these infectious diseases. “They’re very limited and often inadequate.”

For many years, the most conventional method for tackling tuberculosis and brucellosis has been culling herds. Culling was often met with resistance from some environmentalists and indigenous communities.

“In the mid-1990s, an environmental task force recommended culling bison in Wood Buffalo National Park, and that generated more than 11,000 letters to the Minister of the Environment at the time, most very negatively opposed to a culling approach,” said Shury.

In 2016, some northern indigenous groups in Canada approached the federal government with a request to conduct an imminent threat assessment of herds located near Wood Buffalo National Park. The government determined an imminent threat to the recovery of the population and that an immediate intervention would be required.

“While there was no imminent threat to the survival of the herds, they were threatened by disease and their existing small population.”

Instead of draconian culling strategies, the BIG project aims to develop various genome-based strategies to tackle the long-standing “wicked” problem through advanced genomic technologies. A critical project strategy will be the development of tuberculosis and brucellosis vaccines.

“This will be a combined oral vaccine delivered in a single dose to wild populations,” said Shury. “The vaccine will be long-lasting, and we hope that over time it will reduce the prevalence of disease and protect herds that are disease-free.”

The development of vaccines would mark a huge step in combating disease. Knowing which animals are infected is equally critical. The BIG project will use a proteomic approach (a form of protein screening) combined with genomic data to allow conservationists to identify individually diseased bison.

“We don’t have good tests for tuberculosis right now, but this approach will allow us to potentially go into affected herds to know which animals are infected and then have them removed,” said Shury.

The disease problem and the lack of genetic diversity among existing populations are co-exacerbating. With existing herds being small, and the vast wilderness on which they roam, there is little opportunity for interaction among herds, and prevents movement from infected areas. The project, under the direction of Dr. Adams, will use collected genetic materials in the form of embryos and semen, including from bison currently living at the Toronto Zoo, for transfer to and from wild herds.

“The idea is to deploy a long-term bison genome biobank to enhance genetic diversity without spreading disease. It would be a huge improvement to the health of the Canadian population.”

Finally, the BIG project team will develop an “SNP chip” (SNP stands for single nucleotide polymorphism, which helps to identify specific traits). The SNP chip will enable researchers to differentiate between plains and wood bison subspecies and identify bison that may have evidence of cattle genetic introgression (cattle genetic signatures that have become incorporated into the bison genome through cross-breeding). Gaining a greater understanding of the genetic diversity among Canadian bison populations will help better determine introgression and estimate genetic diversity to help future conservation efforts.

Beyond the ultimate research and genome-based goals to eradicate disease and increase genetic diversity, Shury is fully conscious of the symbolic and cultural importance of the bison, especially to indigenous people and communities. Moving into the fall of 2022, the BIG project team will expand its conversations with indigenous communities about the project towards forming a greater collaborative relationship.

“We want to talk to community leaders and elders about issues like the development of the genome biobank,” said Shury. “We want to ensure that concerns like ownership of genetic data are addressed. We want indigenous communities to know exactly where genomics samples are located and how they will be used in the future.

Ultimately for Shury, the BIG project represents the potential for genome-based research and its application in solving some of the most wicked problems in the world.

“I really see this as a once-in-a-generation legacy project for conservation, not just in Canada but in North America, using some of these state-of-the-art genomic tools.”

Thank you to Genome Prairie for submitting this article and photos.

Photo: Bison cows and their calves at the USask Livestock and Forage Centre of Excellence (LFCE).
Credit: Christina Weese.