Saskatchewan’s vibrant canola fields are in full bloom and so is the industry’s calendar this summer season, including the 14th International Rapeseed Congress (IRC) held in Saskatoon from July 5 to 9. Co-hosted by Ag-West Bio and the Canola Council of Canada, it is the most comprehensive forum for discussing advancement in the rapeseed industry.

To complement the world-renowned IRC event, SaskCanola hosted a Blackleg Summit in Saskatoon on July 5, providing an opportunity for researchers involved in SaskCanola’s Growing Forward 2 Agri-Science Project to present their work to date to both the public and private research community. Attendees represented the upper echelon of the blackleg research community, including researchers from many parts of Canada, the USA, Australia, China, France, Germany, Serbia, Czech Republic and Poland.

Initial research results presented about blackleg (also known as phoma stem canker) that afflicts susceptible varieties of canola, exhibited significant progress in both the understanding of the blackleg pathogen and resistance. Blackleg is caused by the hemibiotrophic fungus Leptosphaeria maculans resulting in reduced crop quality, yields and marketability. Progressively, ‘resistant’ cultivars are losing their resistance to the disease because of changes in the pathogen profile that mutates over time. Studies monitored the long-term effects of agronomic practices including crop and cultivar rotations, fungicide use and tillage on pathogen diversity, virulence, disease pressure, and canola crop yield.

Many of the research studies focused on the development of blackleg-resistant cultivars by introducing novel resistance genes transferred through hybridization. Understanding the disease and fungicide resistance in pathogen populations can also help to determine the sustainability of chemical management of blackleg disease.

The Blackleg Summit marked a mid-way point under the Growing Forward 2 Agri-Science Project for SaskCanola and partners, the Alberta Canola Producers Commission and the Federal Government, as they continue to fund researchers from across Canada to work towards new discoveries and solutions for Blackleg in canola until 2018. 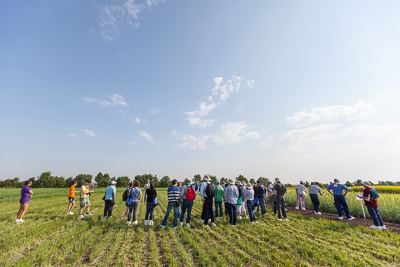 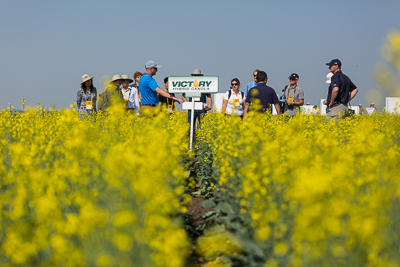 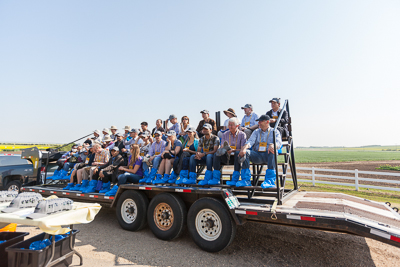 As a finale to IRC 2015, on July 9th Congress attendees had the opportunity to participate in field tours east of Saskatoon. The tours were a collaborative, community event, with representation from Agriculture and Agri-Food Canada (AAFC), BASF, Bayer CropScience, Canola Council of Canada, Cargill, Crop Production Services, Dow AgroSciences, Monsanto, and SaskCanola. Participants had the opportunity to see historical canola plots at the AAFC research station, and company representatives provided background about the Canadian canola industry while leading them through plots seeded with different varieties of canola. Companies demonstrated canola varieties as well as a range of crop protection products utilized in western Canadian canola production. Lunch was served in the quonset at the University of Saskatchewan's Kernen Crop Research Farm.

Tour groups were also introduced to bees and informed of their role in pollinating canola and producing healthy crops; as well as learning about the challenges of maintaining bee colonies on the prairies with our cold winters and extended periods of minimal forage for bees to feed on.

The historical canola plot tours served as a great way to wrap up a monumental week for the canola industry. A week that celebrated how far we’ve come as an industry in terms of leading edge research, collaboration and innovation – and showcased the endless opportunities that lie ahead as we look towards a very bright future for canola!

SaskCanola (Saskatchewan Canola Development Commission) is a producer led organization, established in 1991 and supported by some 26,000 levy-paying Saskatchewan canola producers. SaskCanola’s mandate is to grow producer prosperity through advocacy, research, and market development.