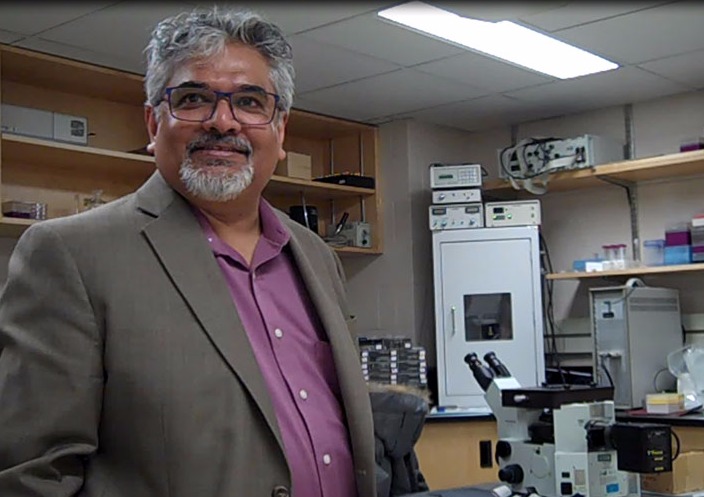 Dr. Ramaswami Sammynaiken (also known as Sammy) is quick to give credit for the University of Saskatchewan (U of S) Saskatchewan Structural Sciences Centre (SSSC) to the visionaries who made the centre come to life 18 years ago, and to the highly-skilled staff that keep the equipment running and facilitate research at the U of S. Sammynaiken makes the SSSC sound like fun, and his enthusiasm for the facility makes me want to nickname the centre “Sammy’s Science House” after an educational video game my kids played when they were young. But this is high-tech fun, and made for serious business.

Located in the Thorvaldson Building, SSSC is the only facility of its kind in Canada. The concept of an open laboratory – with analytical instruments shared by the entire campus – was proposed in 1999, with the idea that it had to be equally accessible to everyone at the University. Sammynaiken says a group of U of S faculty worked hard to secure grants, then stepped out of the way. “They did this for the community, not just for their own research.”

The SSSC staffing is funded through the U of S Office of the Vice-President Research, and houses about $15 million worth of instrumentation. Operation and maintenance of the SSSC is funded through user fees, which are kept relatively low. Around 60 faculty members and 150 graduate students use the centre each year, from across campus. “Health, agriculture, engineering, chemistry, physics; we span the entire research playing field,” says Sammynaiken.

Depending on the situation, researchers can ask SSSC staff to run experiments for them or they can learn to operate equipment themselves. Everyone who uses the equipment is fully trained (or receives a driver’s licence) before they are given access to machines on their own.

An important role for SSSC is to train future researchers, from undergrads up. “Many students from here get more hands-on training on research equipment than they would at some of the bigger universities,” Sammynaiken asserts. International graduate students are thrilled because they actually learn to operate the equipment, which doesn’t happen in many universities. For visiting students, this is a “game changer for their perspective on research” and they often tell others about it. “We strive for students to have hands-on knowledge and we have professional staff making sure that they’re doing things right,” explains Sammynaiken.

Staff members are typically physical scientists with instrumentation backgrounds and expertise in a particular field, and most have PhDs. A recent hire, for example, is a physicist with a PhD in electrical engineering. Staff ensure the equipment is well-calibrated, and clients have the perfect instrument for the job. They can help design experiments and interpret data, and are capable of fixing, maintaining, and even designing and building equipment. This helps SSSC avoid expensive service contracts, and savings are then passed on to researchers.

The facility was set up with the U of S academic world in mind, but industry can also access SSSC. Projects can range from completing simple measurements on a fee for service basis, to solving complex problems, in which case a contract would be drawn up. Whether the work is for industry or academia, confidentiality is always respected.

In cases where intellectual property is not an issue, Sammynaiken says SSSC facilitates collaboration between researchers. “The skills we develop working with one group can be used to enhance research in another group, to invigorate overall research on campus.”

A review in 2011 showed that SSSC has had the most impact in the non-traditional, applied research areas of agriculture and engineering. Agricultural scientists or engineers don’t often have access to this level of instrumentation – and someone to teach them how to use it. “We are able to put many of our agricultural colleagues ahead of the game. It’s a big bonus to Saskatchewan researchers.”

Equipment use is on a first-come, first-served basis, with an online tool to make scheduling as efficient as possible. The facility is open 24/7. Although some may regard the facility as close to capacity with 9-5 workday, Sammynaiken would like to see the use doubled, until it is operating 24 hours per day.

SSSC is always looking for new and better equipment to help the research community. In some cases, the SSSC helps researchers access instruments that are not available in Saskatchewan. If several researchers want an instrument that the centre doesn’t already own, staff will work with the researchers to put a grant together to acquire that instrument. Once the equipment comes into the centre, costs are shared and, in keeping with SSSC philosophy, there is equal access for everyone.