The concept of environmental sustainability resonates in Saskatchewan, a province that relies heavily on natural resources for the economy. With almost half of Canada’s agricultural land, and nearly half the province covered in forest, agriculture, forestry and mining are the major industries here. The greentech industry has been building for 20 years. In the late ‘80s, with the farm economy at a low, there was a push by the scientific community and the provincial Ministry of Agriculture to create new markets for agricultural crops(1).

Researchers got to work, producing new crop varieties and innovative technologies. Businesses have come to life based on years of research into fuels, bio-industrial oils, bioproducts and processes, remediation technologies and crop protection. Ron Kehrig, Sector Manager, Biofuels, Bioproduction and Forestry for Enterprise Saskatchewan, has been involved in building the bioproducts industry for the better part of two decades.

He says the average person is very aware of the environmental implications of water and energy use and the impact of products – and knowledgeable about greentech. “If you think you can just get by with 'marketing green' or ‘green-washing' today, you may be in for a surprise.” In addition, he says today’s green products can deliver sound performance and sustainability. “There’s no trade-off needed between the environment and a good product.”

Saskatchewan’s technology infrastructure can provide much of what developing companies need in the bioproducts and bioprocessing space. Activities are supported by a research cluster on the University of Saskatchewan campus in Saskatoon, including the Saskatchewan Research Council (SRC), National Research Council (NRC), the Canadian Light Source synchrotron, Agriculture & Agri-Food Canada (AAFC), VIDO-InterVac (the new International Vaccine Centre) and POS Bio-Sciences. Innovation Place research park houses numerous companies and is often a focal point for industry interactions. 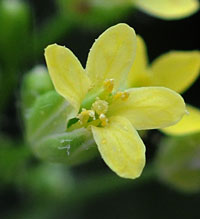 Plants with industrial punch Two crops have become the centre of attention in Saskatchewan: Camelina sativa (false flax) and Brassica carinata (Ethiopian mustard), commonly referred to as camelina and carinata, are ancient crops that grow on marginal land in dry conditions and were once primarily grown for food. These hardy plants show great potential as feedstocks for industrial products. A Genome Prairie project called Prairie Gold focuses on these crops. Research is being conducted by AAFC, NRC and two companies; Linnaeus Plant Sciences’ goal is to create value-added, renewable, biodegradable industrial oils and value-added bioproducts from camelina, as alternatives to petrochemical-based feedstocks, while Agrisoma Biosciences is developing carinata for use as aviation fuel.

Flying high on carinata Aviation companies around the world are aiming to be carbon-neutral by the year 2020, and bio-based fuels are being explored as a way to reach that goal. Agrisoma, the industry lead for Prairie Gold, is developing carinata specifically as a feedstock for biojet fuels. In order to comply with the aviation industry’s standards, the fuel must be chemically identical to petroleum-based jetfuel. Test flights using Agrisoma’s carinata-based fuel are expected this spring.

For the biojet fuel industry to advance in the province, it’s important have a clear understanding of the economics, logistics and challenges for production of these dedicated industrial oilseed crops, along with the processing and commercial use of biojet fuel. With that in mind, Ag-West Bio is leading a feasibility study to assess opportunities in what appears to be a promising industry.

'Taylor' made oilseed crops At NRC, researchers are working to produce industrial oilseeds with very long-chain fatty acids (VLCFAs), specifically erucic and nervonic acids. VLCFAs have many uses as lubricants, jet fuels, detergents, coatings, bioplastics and hundreds of other potential or patented industrial applications. Researchers David Taylor and Elizabeth Marillia are developing the carinata germplasm, engineering plants with high levels of these fatty acids with the goal of making carinata oils competitive with petroleum-based products. Metabolix Oilseeds Inc. is developing a genetically modified camelina suitable for producing plastics, fuels and chemicals as alternatives to petroleum-based products by using microbes that naturally produce polyhydroxyalkanoates (PHAs). By inserting genes from the microbes into camelina, the plants produce the PHA, which is then extracted from the seed oils. Bioproducts are also providing promise in industries such as pharmaceuticals and cosmetics.

Prairie Tide Chemicals, a U of S start-up, is commercializing a technology platform based on isolating high-value cyclic peptides from flax. Peptides, currently synthesized and expensive, have numerous uses, from makeup to medicines and other industrial products. The technology, developed by Martin Reaney, will make these peptides available at a much lower cost – a boost for the flax industry. Flax is also known as a fibre crop. While linen has been around for centuries, flax fibre has a myriad of other uses, like insulation, plastic composites and absorbency products. Saskatchewan’s Biolin Research Inc. is working to increase the profitability of flax fibre.

Biomass is also used to create various bioproducts, like briquettes, firelogs, compost and syngas, which can be used as a feedstock to make a variety of liquid fuels, including gasoline. Syngas is also produced from methane and carbon dioxide, a process that turns two greenhouse gases into fuel. U of S College of Engineering researchers Hui Wang and Ajay Dalai worked with SRC’s Jianguo Zhang to develop a catalyst that offers high conversion rates without carbon buildup. The technology extends the life of the catalyst from 40 to 2000 hours – a huge breakthrough in the industry.

It’s a dirty job, but… Environmental assessment and remediation of industrial sites is another area where Saskatchewan companies and organizations are making their mark. For example, the Saskatchewan Research Council’s EcoAccounting experts provide life cycle assessments to model environmental effects of products, processes or systems, and calculate greenhouse gas emissions to estimate carbon footprints. The Toxicology Centre at the U of S is the largest university-based toxicology centre in Canada.

The project includes the development of software programs to interpret the impact of these microscopic organisms. Mining operations can get help with clean-up from Prairie Plant Systems (PPS). The company has developed a system for reclaiming land in harsh environments, which it has used around mines in Saskatchewan’s north. PPS’s biotechnological approach identifies appropriate plants that can survive and thrive in the area being reclaimed, develops propagation protocols and determines the best technology and appropriate order for reintroduction of the species. Other companies are involved in waste water management. EnviroWay’s microbial or enzyme-based products include formulations for controlling algae growth, breaking down liquid organic waste and reducing odours in septic systems. EcoLibra Systems Inc. uses a combination of mechanical processes, techniques and proprietary reactions to effectively reclaim water from livestock manure and municipal sewage.

Environmental sleuthing at the atomic level The Canadian Light Source synchrotron on the U of S campus in Saskatoon is a powerful tool that helps scientists understand biomass and bonding characteristics of biomaterials by allowing them to view matter at the atomic level – even in living organisms. Greentech research projects characterize some of the research activities. For example, one research team worked on acid mine drainage (AMD), caused when sulphur in mine tailings reacts with water and oxygen to produce sulphuric acid. AMD is a concern for water quality and lake acidification – and is also implicated in climate change. The researchers found two species of bacteria isolated from a tailings pond in Ontario that worked together to limit the amount of acid produced by sharing the sulphur in the tailings as an energy source.

Alternatives to chemical pesticides: Battles in miniature – and mustard Plants can’t run away when attacked, but they do defend themselves. They produce phytochemicals and sometimes have ‘good’ bacteria and fungi on their side, battling ‘bad’ microbes in the soil, or living right in the plant and promoting growth. By learning how plants protect themselves and by finding organisms in nature that either attack weeds, preventing them from competing with crops, or enhance plant health, researchers hope to reduce the amount of chemical-based pesticides needed in agriculture.

Researchers at AAFC focusing on natural controls for crop pests include Chantal Hamel, who is working to improve crops by managing microorganisms in the soil and within the plants and Karen Bailey who has developed a broadleaf weed control based on Phoma macrastoma, a naturally occurring soil fungus. The technology is registered in Canada and should be on the market by 2014. Mustard is grown in great quantities in Saskatchewan – about 80 per cent of Canada’s production – and it’s not just for hotdogs. Mustard has been shown to be effective for soil pest control. Saskatchewan’s Mustard Products and Technologies Inc. (MPT) has developed some of the world’s first organic soil fumigants from mustard that protects turf, strawberries and other high-value crops from nematodes.

Challenges and opportunities Growth in other sectors, such as mining and oil and gas has presented bio-industries with new challenges and opportunities beyond bioremediation. Use of greentech in enhanced oil recovery and mineral recovery are just a few new green technology markets. Ron Kehrig says much of the commercial activity is still first generation biofuels. “As efficient as some of that is with integrated systems, making the transition to large-scale and newer technologies using biomass feedstock is challenging and hard to finance.”

Although finding early-stage money is always a challenge for start-ups, Saskatchewan can offer many positives, including low corporate tax rates and a business-friendly government. Kehrig says the financing community is very open and experienced in working with bio-based ventures, noting “Ag-West Bio is foremost in that regard.” Kehrig is positive about new developments in the sector, crediting companies like Milligan Bio-Tech, Metabolix, Agrisoma, Contango Strategies and Linnaeus Plant Sciences for taking the industry in new directions. “From jet fuels and biopolymers to applications of bioprocessing in mining and other industries, here the industry is broadening its scope.”