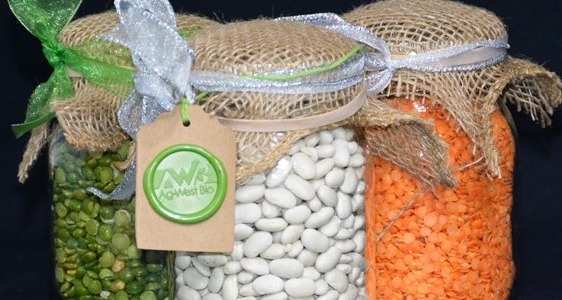 Whether you live in rural Ethiopia or downtown Saskatoon, good nutrition is more than a matter of calories. 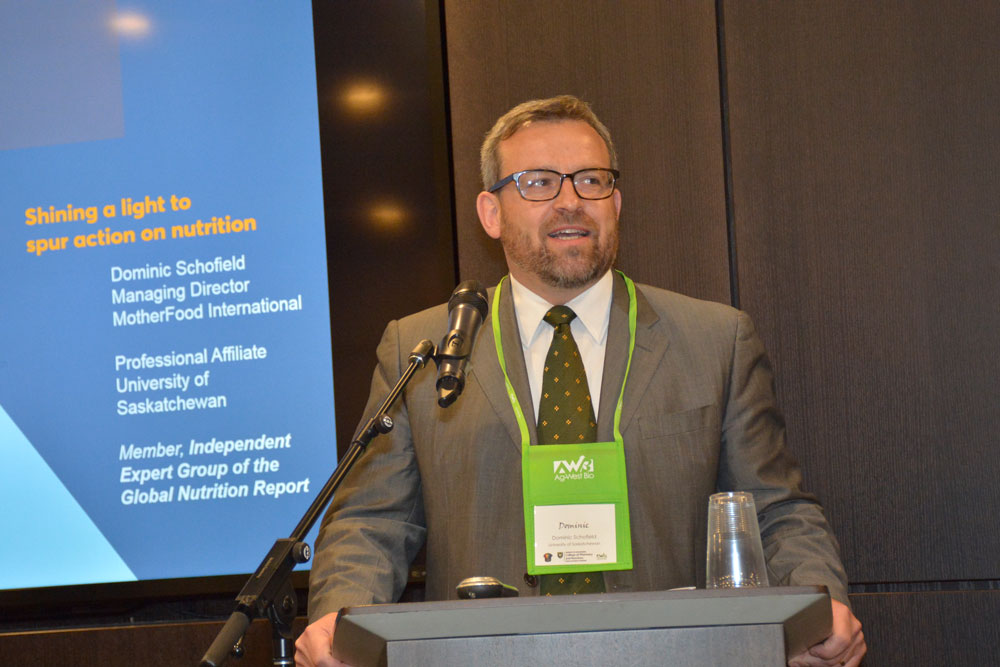 About 800 million of the world’s seven-billion-plus people go to bed hungry every night, while another two billion or so are overweight, said Dominic Schofield, a member of the Global Nutrition Report Independent Expert Group and a professional affiliate with the University of Saskatchewan College of Pharmacy and Nutrition.

Schofield was speaking to about 80 academics, researchers, community workers and members of the public at the World Pulses Day Roundtable on February 7 at Innovation Place. The event was presented by the College in partnership with Ag-West Bio and with support from the Dr. Edith Rowles Simpson Lecture Series.

Schofield kicked off the event with a summary presentation of the latest Global Nutrition Report. A product of world-leading academics, researchers and government representatives, the Report presents a comprehensive look at the state of nutrition around the world. The 2018 Global Nutrition Report reveals malnutrition remains unacceptably high and affects every country in the world, but there is also an unprecedented opportunity to end it.

Malnutrition is a persistent problem. Children who don’t get adequate nutrition in their early years are often stunted both physically and mentally, as well as being more prone to obesity and related problems such as diabetes. Citing the report, Schofield said the cost is both human and economic: an estimated $2 trillion in impact on global GDP, which is more than smoking and war.

While there is no one solution to malnutrition, Saskatchewan is well positioned to help. 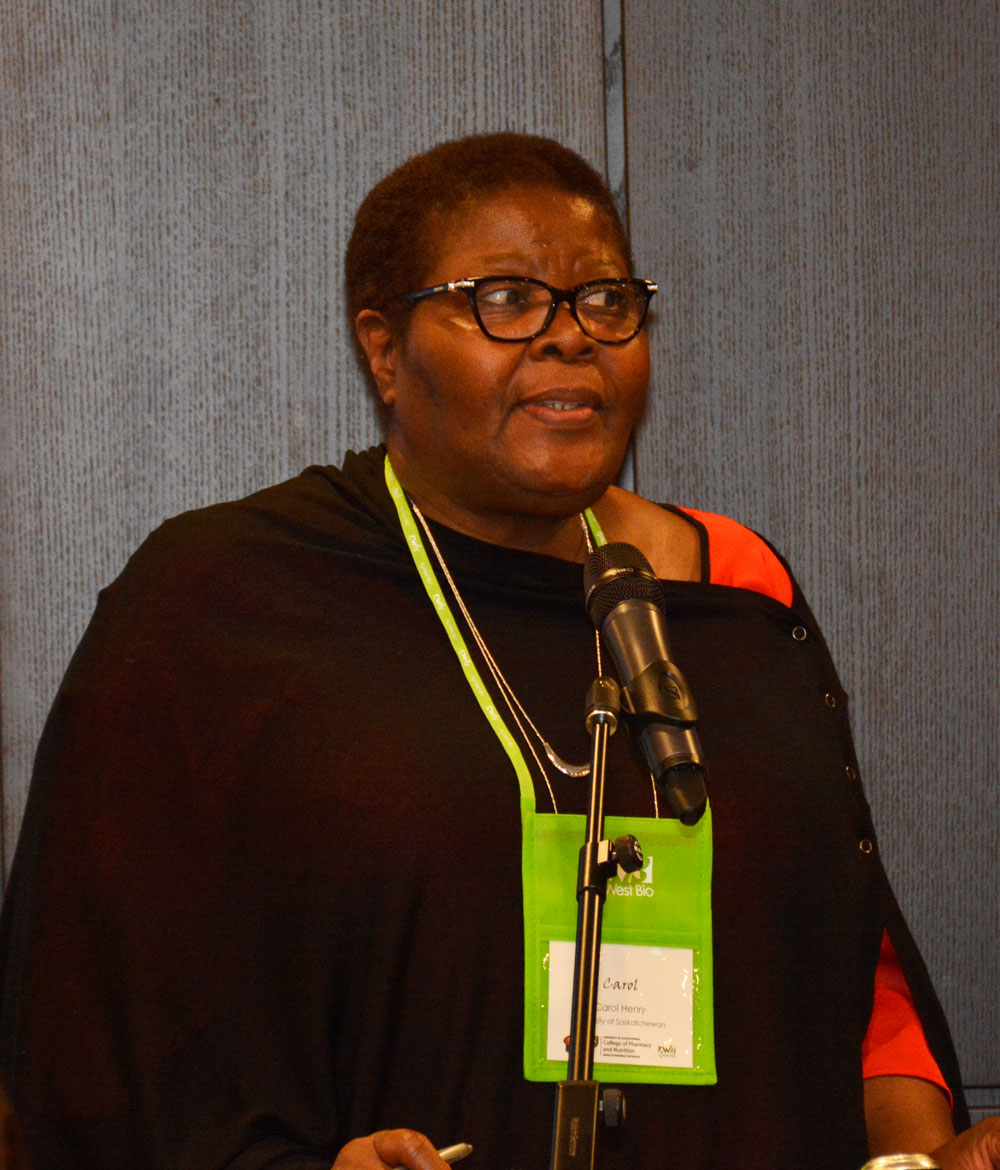 For instance, Carol Henry, a researcher and Assistant Dean, Nutrition in the College of Pharmacy and Nutrition, leads a U of S team that has been working with colleagues at Hawassa University in Ethiopia for more than 20 years. Together, they have helped that country’s farmers incorporate pulse crops to enrich the soil, improve incomes, and provide much-needed protein in local diets. Part of this work is to engage women – many of whom are themselves farmers – to develop ways to prepare and incorporate pulses into local dishes so their families and children will embrace them.

“That’s some of the critical work that Carol and Susan (Whiting) and others have been doing,” said Mary Buhr, Dean of the U of S College of Agriculture and Bioresources. “Working with the families that are now growing these crops and then they need to be able to use them.”

The approach is directly transferrable to Canada. According to the Global Nutrition Report, no income group is eating enough vegetables, whole grains or legumes. All are drinking too much soda. It’s a problem addressed in Saskatoon by CHEP Good Food Inc., a not-for-profit that works with children, families and communities to improve access to nutritious food and to promote food security.

Yvonne Hanson, executive director of CHEP Good Food Inc., explained that the organization began 30 years ago in response to the need for children to have proper nutrition to function and thrive in school.

CHEP provides nutritious food boxes to families in need, supports community gardening, and regularly holds community kitchen sessions where people cook together, share recipes and meals. In the process, they create supportive networks of friends and learn what constitutes good nutrition and how to provide it to their families with a limited income. For Hanson, this social aspect is a critical part of the nutrition picture.

“Food – we love food! Right? Why hold back and just make it this didactic experience? It’s not. Food has to be social, it has to be eaten with others,” she said. “We need to break bread with one another.”

While there have been successes, Hanson explained there is much more to do. For example, up to half of the households in northern Saskatchewan are food insecure, and Schofield reported that food security in Nunavut is on par with “some of the African countries we’re worried about.” Hanson added that a key component – a national food strategy for schools – is lacking in Canada.

“There are 151 countries worldwide that have school food programs,” she said. The fact Canada doesn’t even have one is appalling.”

Saskatchewan is well-positioned to help address malnutrition world-wide, both as a crop and food exporter and as a creator and disseminator of knowledge.

Buhr highlighted the work done at the U of S to develop crops suited for different areas of the world – something that will become increasingly important with climate change. She also emphasized the need to look at the entire picture, from crops such as pulses to managing land, water and soil – including the complex ecosystem living in that soil.

“It’s a whole life cycle piece,” she said. “Animals are a critical part of it as well.”

Paul Hagerman from the Canadian Foodgrains Bank shared their approach to improving nutrition, beginning at the community and personal level. The organization operates in about 40 countries in Asia, Africa and Latin America.

In Malawi, he explained that nurses were puzzled: amid green and thriving farms, children were showing up at the hospitals undernourished. It turned out those farms were exclusively growing maize – and the crop was eaten morning, noon, and night by farm families.

“They were getting plenty of calories, but they weren’t getting adequate nutrition,” Hagerman said.

Rather than try to prescribe a solution, they employed a strategy called “nutrition-sensitive agriculture.” They approached farmers – most of whom are women – to form farmer research teams. They were supplied with three or four kinds of pulse crops and asked to interplant them with their maize.

“See what works well,” Hagerman said. “And then, we want you to harvest these: the seeds, but also the leaves – because they eat lots of leaves as vegetables – and figure out different ways to cook them, and figure out what your kids like.”

The farmers would then come together in groups and share what worked and what didn’t with other families in their communities.

“They were testing things in the field, bringing back their own results, sharing recipes,” Hagerman said.

The approach solved a lot of problems at once: yields were up, malnutrition was down, soil health was improved, and women were empowered in their households through more income. It also points to where Canada can help by exporting ideas such as conservation agriculture to help farmers manage their operations sustainably.

The approach is in line with Canada’s Feminist International Assistance Policy. Adriana Romas, Food Security Specialist with Global Affairs Canada explained that while women produce 50 per cent of the world’s food, they earn only 10 per cent of the income and represent only 20 per cent of land holders. Research shows that women tend to spend their money on their children and households more so than men.

“Supporting women in agriculture could increase production by 20 to 30 per cent and lift millions out of poverty,” Romas said.

Providing successful cropping options to these farmers will remain a challenge for researchers, a something that Stephen Visscher, interim executive director and CEO at the Global Institute for Food Security at the U of S, greets with optimism.

“We’re now moving into an age where researchers have some wonderful tools and they’re still more being developed,” he said. “We can design both high-yielding plants with more nutrition and address things like climate change. It’s a really exciting age for plant breeders. Things that were impossible a few years ago can be done.”