Eat less beef…save the planet! It’s a common theme on social media and among celebrities. Yet, researchers at the University of Saskatchewan are working to show that beef cattle in Western Canada shouldn’t take the rap for climate change.

Several scientists are exploring the various aspects of raising cattle with the overarching goals of quantifying greenhouse gas (GHG) emissions and identifying ways to reduce them.

One study, conducted at the University of Saskatchewan (USask) Livestock and Forage Centre of Excellence’s Termuende Ranch near Lanigan Saskatchewan, is heading into its fifth and final year. During the summers, cattle grazed in pastures with two paddocks that included non-bloat legume plants to determine the effects of these forage types on GHG emissions.

“We’re trying to link what cows are eating, how diets influence the soil, how soil influences plants, which then influence cattle as they eat. The whole premise is to close the circle and look at the system rather than individual points in the system.” 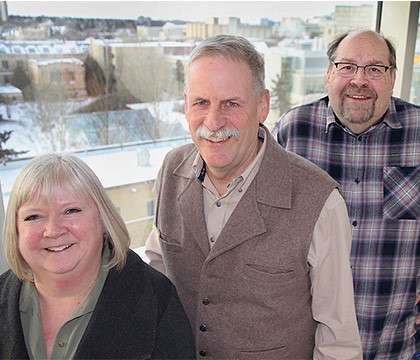 Knight is collaborating with animal scientist Dr. Bart Lardner and Dr. Rich Farrell, another soil scientist, all in the College of Agriculture and Bioresources.

Misconceptions about GHG and cattle abound, starting with from which end methane is emitted by cattle. It’s from belching, the by-product of cattle’s ruminant digestive system. As microbes in the animal’s rumen (the first of four stomachs) break down high fiber forages that people are unable to eat, the feed is fermented and the microbes release gas.

Preliminary results show that the cattle grazing on the pasture where cicer milkvetch had been seeded produced about 20 per cent less methane (litres of gas/kilogram of dry matter intake) than the animals that grazed in the “control” pasture.

“We want to find a pasture type that will produce a good yield and good quality pasture during the grazing season, will result in adequate weight gains on the grazing animals, and will potentially reduce emissions,” explained Lardner, professor in the department of animal and poultry science.

Another misconception involves manure, which acts like a slow-release fertilizer. It’s the urine, providing water, that triggers the release of GHG, not the manure.

With moisture providing the right conditions, soil microbes break down the forages’ roots and the cattle’s manure and urine, and provide nutrients that feed the plants. While Lardner is looking at the legumes potentially reducing methane emissions from the cattle, Knight is looking at whether the legumes, which fix nitrogen, are causing more or less N2O to be emitted from the soil or whether the plants in the pasture are efficiently using the nitrogen as part of their growth.

All this will lead to a complete system number that can be incorporated into Canada’s greenhouse gas inventory, dispelling another misconception.

“We know we are producing low carbon footprint cattle in Western Canada,” said Farrell, associate professor in the department of soil science. “If we want [climate] models to reflect what’s happening in western Canada, we need to provide the data so the models can be adjusted to what’s actually occurring here. That’s the knowledge gap that we are trying to fill.”

Part of that gap includes the effect of manure applied to cropland in the semi-arid Prairies. In another study, Farrell and Dr. Jeff Schoenau are comparing N2O emissions from manure spread at a constant rate with that spread at a variable rate on barley fields at the LFCE’s Forage Cow-Calf Research and Teaching Unit, located south of Clavet, Saskatchewan.

Photos:
Top: Manure from Forage Centre of Excellence feedlot is spread on a barley field, south of Clavet. Equipped with GPS and continuous load weighing, the precision spreader applies the manure at known and variable rates, based on soil fertility and crop yield data. The impact of manure on the soil, the barley and the environment is measured throughout the growing season.
Middle: Collaborating researchers Diane Knight, Bart Lardner and Rich Farrell, USask College of Agriculture and Bioresources.
This article was published on the USask website. Republished with permission.