Farmer-driven research and development has been the hallmark of pulse crop production in Saskatchewan since the first varieties were developed at the University of Saskatchewan’s Crop Development Centre 40 years ago.

“In terms of research excellence, the pulse crop research and breeding group is now one of the most successful programs in the world,” said CDC managing director Kofi Agblor.

The CDC has developed dozens of varieties of peas, lentils, chickpeas, drybeans and fababeans since the 1970s. Advanced genomics-based tools such as marker-assisted breeding will hasten development even more.

The United Nations as designated next year as International Year of Pulses to heighten awareness about the crops’ benefits in terms of nutrition, sustainable food production and food security. Saskatchewan is a lead player. 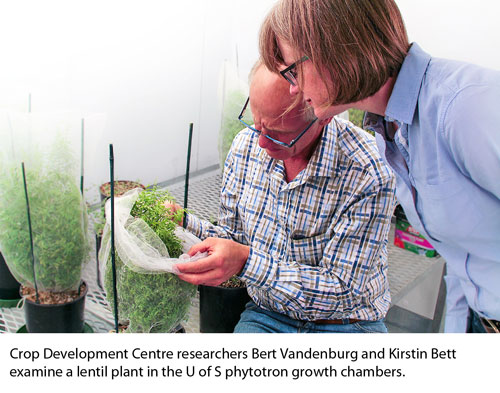 CDC researcher Bunyamin Tar’an is part of an effort to incorporate genetics from wild relatives of chickpeas. The project, funded through the U.S. Agency for International Development, is led by the University of California-Davis.

Tar’an is chasing traits such as stress tolerance, yields and nitrogen-fixing capacity with the aim of producing varieties that can grow further north, into Saskatchewan’s dark brown soil zone. The work is supported by SPG, ADF and WGRF.

SPG numbers show the province’s farmers produce more than three-quarters of Canada’s field peas, 96 percent of its lentils and 99 percent of its chickpeas.

While the province’s pulse crops find their way onto dinner plates around the world, Saskatchewan expertise is also helping families feed themselves, earn incomes and preserve soil.

Researchers from the U of S’s colleges of agriculture and bioresources, pharmacy and nutrition and sociology are working with colleagues at Hawassa University in southern Ethiopia to use pulses to improve nutrition in poor rural regions. 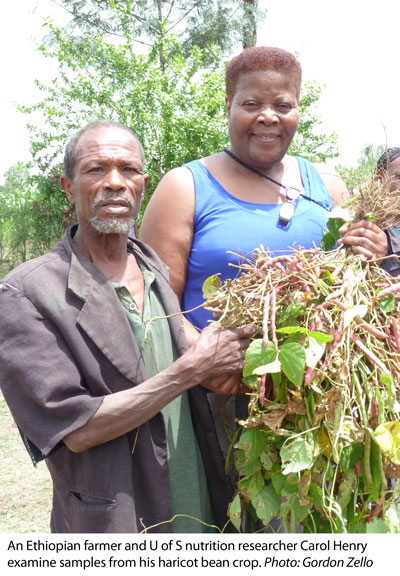 U of S researcher Carol Henry said Ethiopia has one of the highest rates of malnutrition in the world, which is partly because of heavy reliance on crops such as wheat, teff (a local grain) and root crops such as cassava.

“These crops are high in carbohydrates and have little or no protein,” Henry said.

“They also deplete nitrogen from the soil, making it less fertile for subsequent crops.”

Backed by funding from Canada’s International Development Research Centre (IDRC), the Canadian-Ethiopian team has worked for more than 17 years to produce superior varieties of peas, lentils and beans. They also identified local rhizobia, which are nitrogen-fixing bacteria that live on pulse crop roots.

“These bacteria, when spread onto the seeds of improved pulse varieties, increase crop yields up to 60 percent and leave valuable nutrients in the soil for the next season’s crop,” said Bruce Coulman, a U of S plant breeder involved with the project.

Outreach is critical to the success of the project. This demands expertise from nutrition and gender researchers, soil and plant scientists, food processers and post-harvest marketers.

For example, the research team had to demonstrate to farmers that pulses were a worthwhile option. Outreach extended to the kitchen, where women were introduced to techniques such as sprouting pulses to make nutrients more available and mixing pulses with grains to provide more complete nutrition.

This article was first published in the Western Producer and the U of S On Campus News. Re-published with permission.