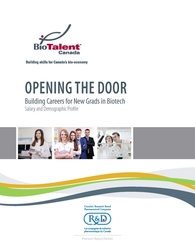 A new national Labour Market Information (LMI) report was released today on the salaries and demographic profiles of new graduates entering the biotech sector. The BioTalent Canada report, “Opening the Door – Building Careers for New Grads in Biotech,” is sponsored in part by Canada’s Research-Based Pharmaceutical Companies (Rx&D) and features data collected from new graduates that participated in the federal Career Focus wage subsidy program from 2013 to 2015.

Among the interesting trends that are highlighted in the report:

The cost of hiring new graduates continues to be a challenge for companies in biotech. In BioTalent Canada’s 2013 labour market study, Sequencing the Data, a majority of biotech companies surveyed across Canada stated their greatest business challenges as “access to capital,” followed closely by “access to talent.”

The Career Focus wage subsidy program addresses both these challenges directly. Part of the federal government’s Youth Employment Strategy, the program opens the door for new graduates to their first biotech job by offsetting some of the costs of hiring.

BioTalent Canada applauds government initiatives to help more graduates land their first jobs, and help companies in the sector access new talent. “In the last two years, BioTalent Canada has disbursed over $2.5 million in wage subsidies to 88 biotech employers, who hired 255 new grads,” says Rob Henderson, President & CEO of BioTalent Canada. “Career Focus is by far our most successful program. Its popularity is testament to how desperately small and medium size biotech companies need government programs like these to continue to push their business goals forward and drive the bio-economy,” says Henderson.

“The success of the Career Focus wage subsidy program is a perfect example of the power of partnerships between government, industry and academia," says Russell Williams, President, Rx&D. “When we have better jobs, better healthcare and better health outcomes for patients, all Canadians benefit.”

The data in the new report indicates that wage subsidies create jobs for Canada’s under-employed youth. At the end of the program, 90% of the new graduates that participated were still employed full-time, 68% of whom were employed with the same company. Many employers doubted positions would have been created otherwise. “We only began considering this position due to the subsidy,” says Lynn Menegotto, Human Resource Manager at Mantech Inc., one of the employers that benefitted from the program.

Interestingly, the data in “Opening the Door” conflicts with the opinion that new graduates need at least a year of work experience to be considered a viable hire. With the typical new graduate participating in the program for 6.3 months, and with 90% retaining employment within biotech, employers demonstrated the value they place on young people with far less on-the-job experience.

The report was also sponsored by: