Quinoa: ancient ‘superfood’ on the Prairies 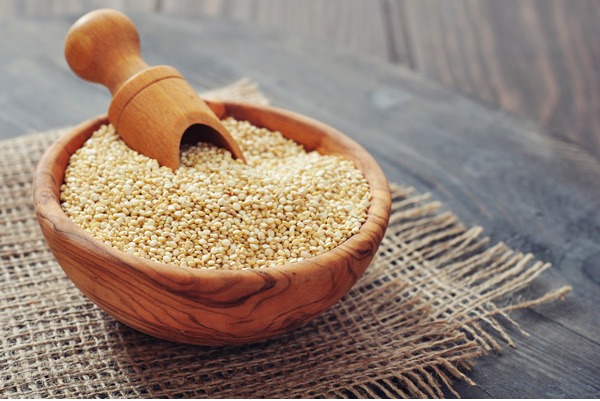 As the Protein Industries Canada (PIC) supercluster gains momentum, ancient grains such as quinoa are attracting attention. The global quinoa industry produces 400 million pounds per year, with steady growth of 5-10%. Northern Quinoa Production Corporation (NQPC), headquartered in Saskatoon, currently holds a growing share of that market and plans to expand further through a combination of agronomic research and savvy marketing.

Originating in South America, quinoa has been cultivated for thousands of years. It is high in fibre, iron and bio-available protein. “It’s the meat of plants, if you will,” says Nick Kelley, CEO of NQPC. It became popular in North America 10 years ago, and gained rockstar status in 2013, which was declared the International Year of Quinoa by the United Nation’s Food and Agriculture Organization.

Quinoa got a head start in Saskatchewan 20 years before that, when pharmacist Joe Dutcheshen of Kamsack began to grow it in 1992. He was originally interested in quinoa for the saponin in its seed coat, which has potential as both a medicinal ingredient and a seed treatment. “Mr. Dutcheshen was in the right place at the right time,” says Kelley. “He was interested in quinoa’s seedcoat, but in the meantime, it became super popular as a health food.”

Dutcheshen’s work included selecting plants that thrive in Saskatchewan growing conditions. This informal breeding program is 25 years old, and golden quinoa, a uniquely Canadian product, is the result. Dave Friedberg’s holding company, The Production Board, of San Francisco purchased the business in 2015.

NorQuin is currently trialing quinoa varieties from other areas of the world for disease resistance, increased yield, and other desirable characteristics, and then crossing them with NorQuin quinoa, which grows well on the Prairies.

“We’re looking for what everyone looks for in a crop: higher yields, hardy plants, disease resistance, early maturation,” says Kelley. “And, because quinoa is currently eaten as a whole grain, we want it to be appealing to consumers, which means developing different colours, textures and tastes.”

Since sales of quinoa currently rely on retail rather than commodity markets, NQPC is working on developing a strong retail brand. Tiny Hero Foods launched in 2017 and has enjoyed immediate success. “Similar to other recognizable grain brands, such as Uncle Ben’s Rice or Quaker Oats, we are trying to make quinoa more accessible. First we educate consumers about the health and flavour benefits, and then launch products that are convenient, delicious and consumer tested.”

There is potential for the market for quinoa-based products to grow. “A little bit of quinoa adds nutritional value,” says Kelley. “But it’s hard to formulate with only quinoa, because it is more expensive and doesn’t have the functionality of other ingredients like corn, wheat, potatoes, or soy.”

A recent partnership with Ardent Mills offers exciting growth opportunities as they step into the ancient grains space, and also offers more opportunity to test other value-added quinoa products, such as puffs, flour and flakes. This ‘tiny hero’ may just give staple grains a run for their money in the near future.

Noelle Chorney is a writer based in Saskatoon, SK.