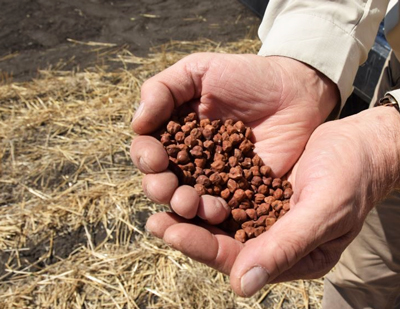 Farmers in Western Canada know the benefits of well thought-out crop rotations. These can reduce the impact of harmful insects, reduce the amount of fertilizer needed, improve soil health and lengthen the period when specially bred crops remain resistant to disease. With the increased interest in growing pulse crops in recent years, researchers at Agriculture and Agri-Food Canada (AAFC) have quantified some of the benefits of adding these crops to rotations.

To help commemorate the International Year of the Pulses, we are revisiting some important research findings on how pulses contribute to sustainable crop production.

"With the integration of improved farming practices, we can harvest the great benefits that pulses can offer, with a minimized risk of potential root rot development over years."

In another study, Gan and his team found that crop rotations have a large effect on microbial communities in the soil. These microbes, including fungi and bacteria, can have a beneficial relationship with the plants. Farmers benefit from microbial-crop rotation relationships through increased crop profitability and input efficiency. For example, the team found that durum does better following a crop of peas than it does following chickpeas, due to the pea roots having beneficial interaction with microbial communities in the soil.

Research into the effects of crop rotations on microbial communities and soil health is ongoing. 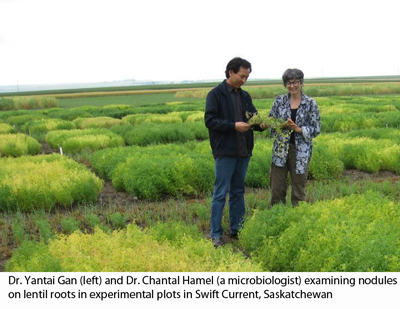 One paper, published in 2011, showed that diversifying cropping systems with oilseeds and biological nitrogen fixers such as pulses lowered the carbon footprint of durum wheat by an average of 22% over cereal-based monoculture systems.

Another paper, published in 2014, showed that in a 25-year field study, wheat in a lentil-wheat rotation system produced a similar amount of grain as in the continuous wheat system, but the former did so with 29% less nitrogen fertilizer. Consequently, fertilizer-nitrogen-use efficiency for wheat in the lentil-wheat system averaged 80% greater than for continuous wheat system in dry years, 97% greater in normal years, and 36% greater in wet years.

How does this happen? Rhizobia, a particular kind of soil bacteria associated with legume root systems, fix nitrogen from the atmosphere in a solar driven process that transforms the nitrogen into ammonia. This provides a large portion of the nitrogen required for plant growth. A portion of the fixed nitrogen remains in the crop roots, nodules and soil, which contributes to nitrogen pools that benefit subsequent crops.

These two studies clearly show that the use of pulses to diversify rotation systems is key to increasing total grain production while reducing carbon footprint in agriculture.

Too much of a good thing?

Lentils have increasingly become a crop of choice for farmers, especially in southwest Saskatchewan, as pulses have a lot of benefit for crop rotations. However, is shortening the rotation to include more lentil plantings a good idea? Considering potential risks of pathogen building up in the soil with intensified pulse rotation over time, it is advised that in wetter areas or on clay soils, or on those farms where root rot diseases have been a growing concern, a longer rotation of pulses or more diversified cropping system should be adopted.