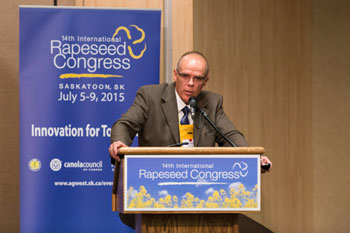 For the first time ever, researchers have identified a weed—Elusine indica—that is resistant to all major non-selective herbicide groups: glufosinate, glyphosate and paraquat. While the situation is not as dire in Canada yet, it is crucial that we take steps to prevent herbicide resistance in weeds.

At the 2014 International Rapeseed Congress, Neil Harker, Research Scientist at Agriculture and Agri-Food Canada (AAFC) Lacombe, discussed the risks faced by canola producers in the coming years, and some integrated weed management systems that may slow the evolution of herbicide resistance.

“We are quickly losing efficacy of our most valued herbicide tools,” he said. “Cropping system diversity is also a factor. The most profitable crops drive diversity.” As long as farmers are getting high yields from canola, they’ll be using it in their rotation as often as possible.

While some herbicides are less susceptible to resistance than others, weeds will eventually select for resistance to any herbicide. Glyphosate and glufosinate – the two most popular herbicide families used on canola – are low risk for herbicide resistance compared to other herbicides in use, but because they are applied on millions of acres every year and in multiple crop rotations, the risk of resistance increases each year.

Mixing multiple herbicides or using crop rotations that facilitate different herbicides from year to year can slow evolution of weeds, but use of herbicides still places selection pressure on weeds.

Rye grass in Australia is already widely glyphosate-resistant, and in some areas of North America, wild oats may soon follow suit. In the US, nearly half of farmers had glyphosate resistant weeds in 2012. In Canada, producers also put tremendous selection pressure via glyphosate use. Already, Ontario has four resistant species, including ragweed and fleabane.

AAFC Lacombe is looking at integrated weed management systems that avoid the use of herbicides. The team looked at alternatives to the standard crop rotations in western Canada, such as canola-wheat-canola-wheat, canola-wheat-barley/peas-canola, or canola-canola-canola. They looked at working in a rotation of early-cut silage for the reduction of wild oats over time, as well as reducing selection pressure for resistance. “If you go out of canola for two years, you get higher yields. That’s also two years you reduce in-crop glyphosate and glufosinate selection pressure.”

Proper application of herbicides is also key to preventing herbicide resistance. “Canola is often treated as a cleanup crop. Farmers often apply two rounds of herbicide where one is sufficient. The more herbicides you use, the more exposure weeds experience and that leads to greater resistance.”

Mechanical weed seed destruction methods are widely used in Australia. The Harrington seed destructor is used to destroy seeds in chaff. Baling, collecting, or even burning chaff rows have also been explored. Australia has also adopting chaff tramlining: driving field vehicles over the same tracks and placing chaff in those tracks so that weed seeds are unable to grow due to traffic and packed soil.

A multi-pronged approach is the most recent development in the history of weed management in canola. Using herbicides strategically, along with no-till, mechanical weed control and strategic crop rotations, will slow the pace of glyphosate and glufosinate resistance.