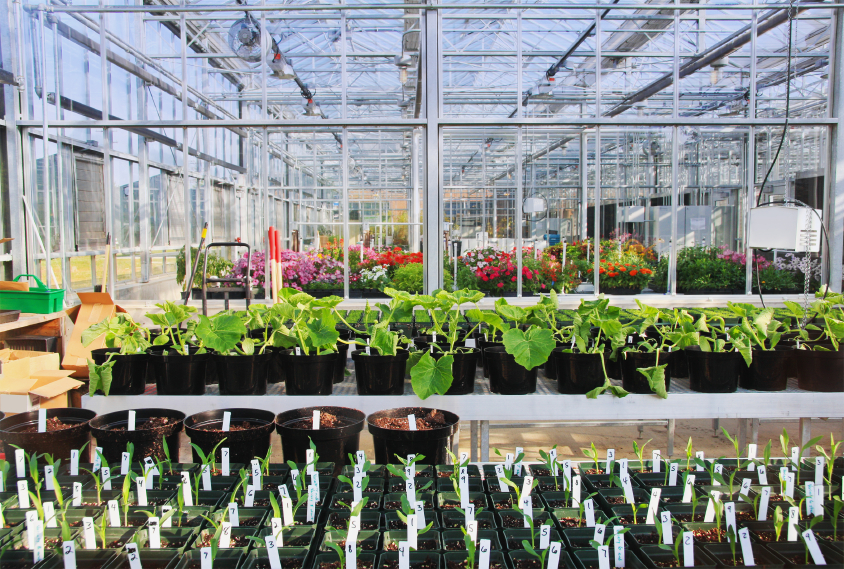 Many of the drugs that we have come to rely on to treat disease may one day be produced by transgenic plants – more efficiently and at a much lower cost than with today’s methods. Although there are challenges to overcome, proponents believe the stars may finally be aligning for plant molecular farming, a field of study that has been in and out of the news for the past two decades.

Plant molecular farming refers to use of biotechnology to produce new molecules not normally found in plants. These include both pharmaceutical and industrial proteins. Plant-made pharmaceuticals(1), or PMPs, are derived through the development of transgenic plants, which act as factories for the production of recombinant proteins, such as vaccine antigens, antibodies, therapeutic proteins and nutraceuticals. These proteins are typically produced using yeast, microbes, animal cells and transgenic animals. According to Dr. Graham Scoles, Associate Dean at the University of Saskatchewan’s College of Agriculture and Bioresources, there is currently no academic research activity in the area at the U of S.

He believes researchers are deterred by a lack of funding, along with the perception that regulations are too onerous. “Molecular farming got off to a good start but quickly whimpered, primarily because of the regulatory hurdles that were thrown up,” Scoles says. “For a researcher to even think about doing something in that area they would be dubious as to whether they could get any funding.” In Saskatchewan, Prairie Plant Systems (PPS) is the only company engaged in plant-made pharmaceuticals. In the 10 years that the company has been active in the field, Dr. Paul Arnison, VP of business development, has seen the industry decline. “Ten years ago we had a much more vibrant industry than we have today.

Most of the small companies collapsed because they couldn’t get financing.” Arnison says PMPs accounts for about 10 per cent of Prairie Plant’s activity; the company is using a legume model to produce therapeutic and industrial proteins. PPS uses other successful lines of business to help fund the development of its new technologies. According to Arnison, the regulatory environment has guided how PPS runs this part of its business. PPS grows pharmaceutical plants in contained facilities, focusing on high-value products that are needed in relatively small quantities. “We don’t have to deal with the regulatory issues of the Canadian Food Inspection Agency because we are not going to go outside.”

Even when considering small quantity production, Scoles is skeptical. “You’re still looking at significant numbers of square meters. Would I do that in a greenhouse, or would I go to a warmer environment where I don’t have to heat the greenhouses in the wintertime?” Dr. J. Christopher Hall is the Canada Research Chair in Recombinant Antibody Technology and a professor in the School of Environmental Sciences at the University of Guelph. He is the only researcher at the U of G working on plant molecular farming. He muses that eventually, “maybe 20 years down the road,” lower-end proteins – like industrial antibodies, enzymes, or peptides not used in the healthcare industry – might be grown outside. But for now, he says, plant molecular farming should be done in controlled environments – in greenhouses, or in higher-level containment facilities with artificial lighting. He says as long as the plants remain quarantined indoors, many environmental regulations are not an issue. “I think it’s completely doable. I don’t think there is any barrier, really, to plant-made pharmaceuticals.”

Hall is also Chief Scientific Officer for PlantForm Corporation, a spin-off company that is developing antibody drugs in tobacco plants. PlantForm’s first product will be a subsequent-entry-biologic (SEB) version of the breast-cancer drug Herceptin, at a fraction of the cost. In vitro analysis shows that the plant-made version has the same efficacy as the brand name drug. The drug is currently being tested in mice.(2) As an antibody expert and also “a plant person from way back,” Hall is in a rather unique position, which has given him an advantage in this field. He says working with scientists in the pharmaceutical industry has opened his eyes to the idea of applying plant-based technologies to create biosimilar versions of brand-name drugs, rather than focusing on developing their own innovator drug products.

Creating teams of people with varied perspectives is crucial for the success of a science-based business. Hall notes that business people think differently than scientists, and that is important. “You need both sides, both groups sitting together talking, and saying okay, let’s analyze this from a science point of view, a business point of view, and let’s try to come up with a good consensus that takes us where we need to go. Given that it’s been done well, the science is only a small portion of what needs to be done to get something out on the market.”

Interest in the field has recently been renewed, partially due to the failures of traditional techniques, such as the potential for introduction of viruses or prions in the animal-based proteins. “Plants don’t get human viruses and diseases,” notes Arnison. “There have now been some failures where the cell culture systems have gotten these.(3) This is why there has been a renewed interest in plants as a backup or maybe even a primary system of developing products.”

Arnison is optimistic. “It is a technology with enormous promise that has struggled to get going but I think the corner is now turning and there has been a bit of a renaissance.” Hall credits pioneering work at Agriculture and Agri-Food Canada, the University of Guelph, the National Research Council-Plant Biotechnology Institute in Saskatoon, Saskatchewan and the University of Western Ontario in London, Ontario for creating an important foundation for the industry that will pay off downstream. “Eventually it’s going to make it. And it’s going to be built on work that everybody has done over the years in the industry.”