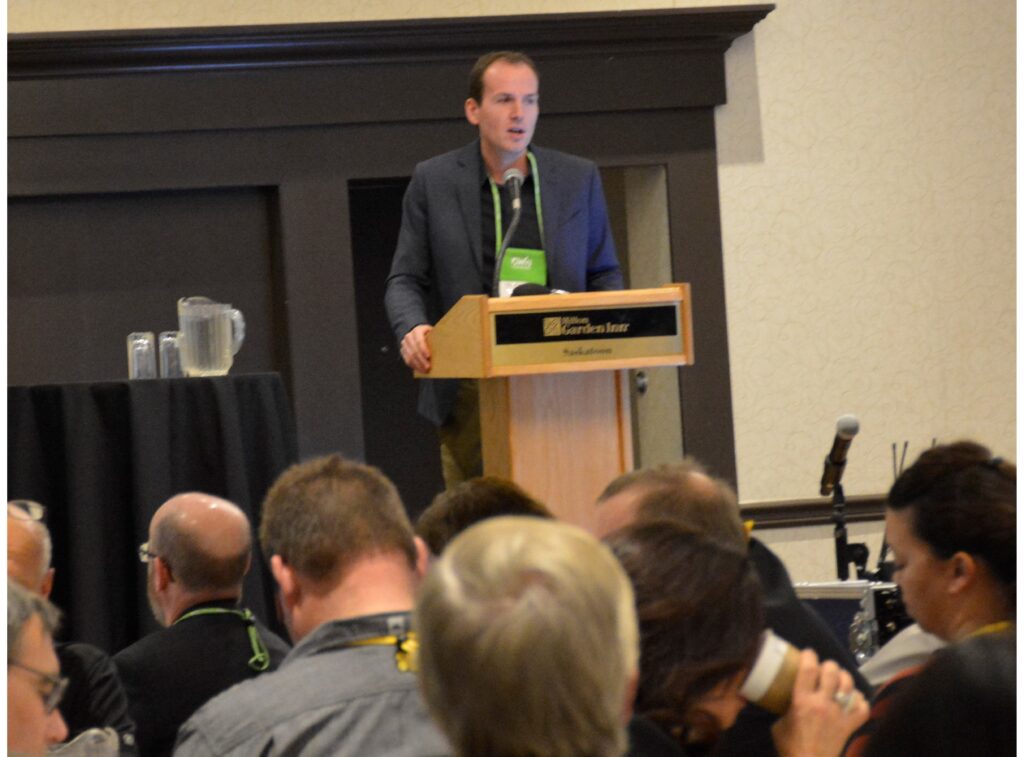 Environmentally-conscious consumers should love GMOs. Scientific consensus shows they are safe and allow farmers to grow food more efficiently with fewer inputs such as fuel and crop protection products.

Yet these consumers are the most likely to reject genetically modified organisms (GMOs), says Peter Slade, an agricultural economist from the University of Saskatchewan. Environmental non-governmental organizations (eNGOs) lead the charge.

“When we think about NGOs who purport to represent the interests of developed countries, they often have an anti-technology perspective when it comes to food,” he says. “It seems to us in the agricultural industry that these beliefs, these preferences, are destructive, even counter-productive to their own goals.”

Slade, who holds the Canadian Canola Growers Association Agricultural Policy Chair, was speaking to about 300 research and industry professionals at the Canola Industry Meeting and Innovation Day organized by Ag-West Bio in Saskatoon December 5 and 6, 2018. The event also shared the latest in crop production and crop protection research as well as world outlook for the crop.

He explains that eNGOs and the consumers over which they hold sway may reject GMOs based not on facts but feelings, and in particular, how they see themselves.

“If you think about what they think about their identity and how they identify, then I think that could give us some more insight on why they hold what we would think of as counter-productive preferences,” Slade says.

There are at least two aspects to this. First, in terms of identity, people want to be recognized as part of a group that behaves ethically. This means making choices they see as being good for causes they care about, such as the environment.

Slade points to some of his own research that backs this position. In it, people were presented with ethical attributes such as organic, free range or conventionally raised chicken. In the end, the product itself didn’t seem to matter.

“What mattered was if consumers had the choice to be ethical or not,” he says. “I’m going to chalk this up to consumers wanting to buy an ethical identity for themselves, as opposed to really thinking about the attributes of a product and how much they value these specific attributes. They really just care about what their purchase says about themselves as ethical consumers.”

These ethical choices can also be against who they see as bad, such as large corporations.

“You get other people that associate GMOs with Monsanto, or associate it with these big multinational corporations,” Slade says. “Then it really becomes part of their identity to avoid these foods. Maybe not necessarily to do with the science, but to do with the companies that are involved.”

A second part of anti-GMO behavior in the supermarket aisles relates to how people make decisions. Slade explains that it takes considerable time to learn enough about genetic engineering to make an informed decision and most people don’t care enough to bother.

So where does this leave companies and organizations that have science firmly on their side and public opinion firmly against them?

Slade admits to no silver bullet, but suggests messaging around GMOs should likely aim at people’s empathy rather than their intellect. For example, how Arctic Apples can help busy parents put fresh fruit in their kids lunches, or how Bangladeshi farmers can use GMO brinjal (eggplant) to protect their health and increase their income.

“I think getting people to identify with the benefits of GM crops not on a scientific level but on an emotional, empathic level is probably something good,” Slade says, citing Daniel Kahneman’s 2013 book Thinking Fast and Slow which has gained popularity in economics circles.

Short, relatable messages that speak to people’s values appeal to the “thinking fast” decision-making process. These can be personal – as in apple slices – or more global, as in the Bangladeshi farmer. Once people are enticed to care about an issue, they are more likely to decide to take the time to engage their “thinking slow” decision-making process and learn the science.

“Trying to find a way to get consumers to want to want to learn about it I think would be important,” Slade says. “Perhaps we can get people to buy into the narrative of health outcomes in the developing world – that might be one idea. Probably other people have had better ideas than I do.”

“Research is much better at highlighting things that haven’t worked than what is going to work. I think we know what doesn’t work is just bombarding people with the scientific information.”