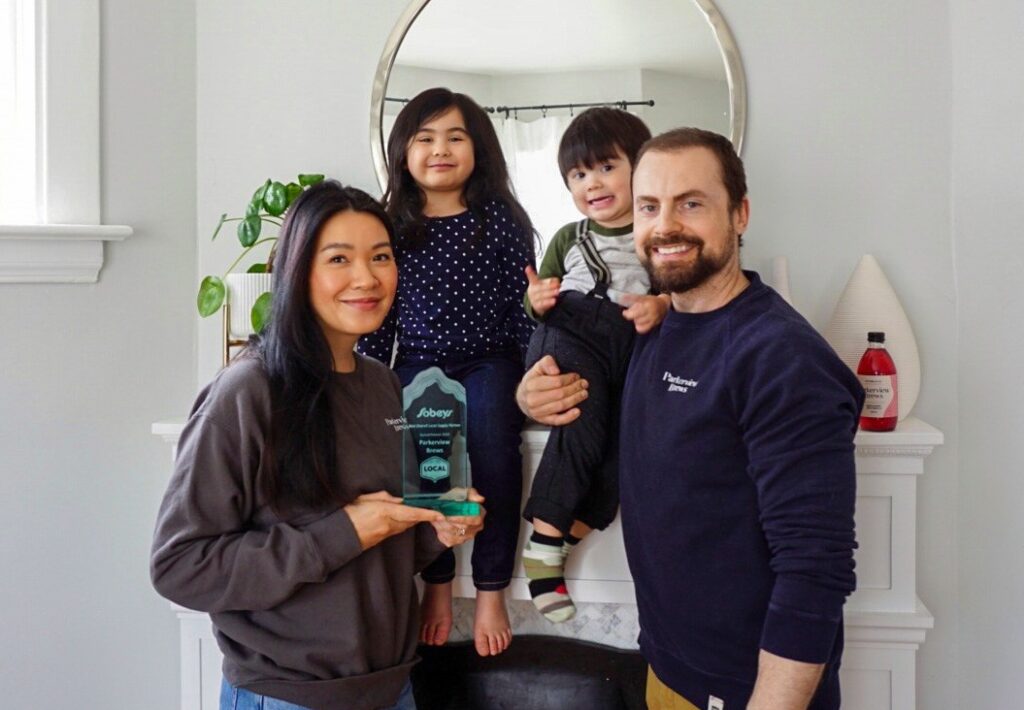 “Traditionally, kombucha has been associated with a certain kind of lifestyle like — maybe you are vegan, or you practice yoga,” Kaban says. “I wanted to create this mainstream brand around this product that was accessible and approachable, where you don’t have to prescribe to a certain lifestyle.”

When Kaban started drinking kombucha she found that it was often too vinegary or excessively sweet She believed that she could make a product that was more balanced and more palatable for novice kombucha drinkers.

Known as a “living beverage,” kombucha is a fermented infusion of tea, sugar and a culture of bacteria and yeast. This living culture goes by a few names and resembles a gooey pancake.

“It’s called the ‘mother’ or an acronym SCOBY which stands for symbiotic culture of bacteria and yeast,” Kaban says. “You add your sugar, you add your cultures and then science happens!”

From brew to bottle, it takes roughly six to eight weeks for a batch of Parkerview Brews kombucha to hit the shelves.

Kaban’s husband Tyler is the company’s kombucha brew master. With a degree in plant science and a background in cider fermentation, he is well suited to create the innovative flavours that Parkerview Brews is known for.

When the Kaban’s are choosing their flavours, they pay special attention to molecular pairing. Their crowd-pleasing peach mango kombucha was chosen for the complementary flavours of the fruits. Both contain terpenes (a class of aromatic compounds that give plants their characteristic scents) that pair well together and contribute to the drink’s popularity.

Parkerview Brews is committed to sourcing local ingredients whenever possible. They partner with many local suppliers and buy their fruit from local growers first.

“We know the consumers love to know where the food is coming from and especially with this past year in the pandemic. I think people really became more conscious about it, so it’s always been a mandate for us to include local ingredients whenever we could,” Kaban says

The Kaban’s launched their business in 2017 at Ideas Inc.’s Street Stall Saturdays. Their products were met with a lot of enthusiasm, allowing Parkerview Brews to grow rapidly over the years.

“Now we have our own facility and a small storefront to test new flavours,” Kaban says. “We are constantly innovating, thinking about new flavour profiles and new ingredients.”

Kaban looks at Parkerview Brews kombucha as a healthy beverage that consumers can incorporate into their lives. It can be an alternative to a happy hour beverage at the end of the day or enjoyed mixed with beer or as a kombucha cocktail. This versatile beverage allows consumers to drink it any way they want.

The company recently won the best local supplier award from Sobey’s grocers. Kaban says that this kind of recognition from retailers is really meaningful to her as an entrepreneur.

As a woman of colour, representation in the industry is also very important to Kaban.

“You don’t see a lot of women in leadership roles in this industry. We really pride ourselves in being locally owned and woman owned,” Kaban says.

Parkerview Brews can be found in over 80 retail locations — like grocery stores and speciality stores — and is served in local cafés and restaurants. The company also has nine local fill stations where you can grab a growler of kombucha to go.