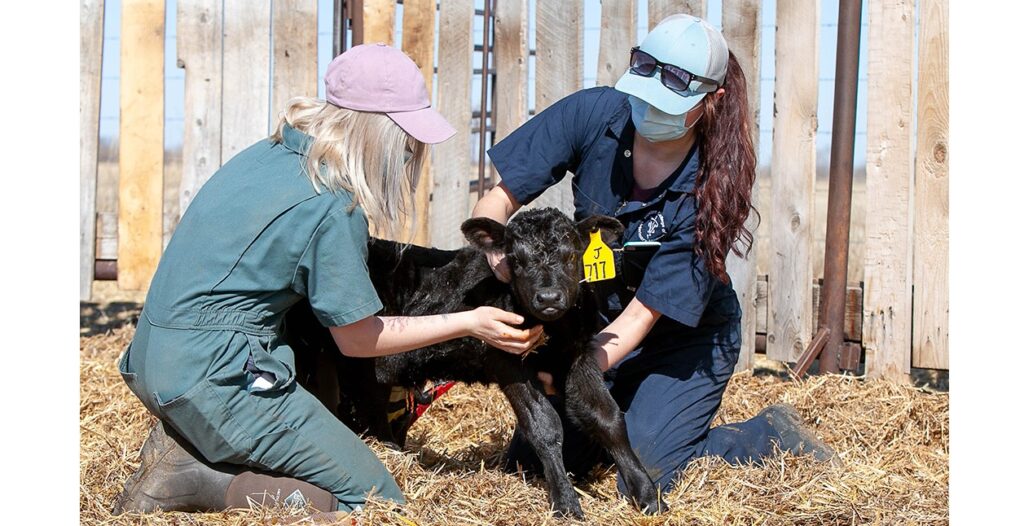 For the first time, senior veterinary students at the Western College of Veterinary Medicine (WCVM) are participating in calving rotations at a University of Saskatchewan (USask) facility this spring.

The university’s Livestock and Forage Centre of Excellence (LFCE), located south of Clavet, Sask., has 400 cows and heifers calving in April and May. That flurry of calving activity gave two groups of fourth-year Doctor of Veterinary Medicine (DVM) students plenty of first-hand experience with the daily operations that occur during spring calving for cattle producers.

The first group of fourth-year veterinary students started a two-week rotation on March 29 with a second group beginning another two-week stint on April 12. But preparing for this new clinical rotation offering started long before this spring.

“We have to start planning a year in advance, of course, to get the students signed up and also to make sure that we have the calving aligned with the rotation so that there will be lots of activities,” says Dr. Colin Palmer, associate director of the LFCE and co-ordinator of the calving rotations.

Now, the WCVM can simulate the ranch experience of a busy calving season at the Forage Cow-Calf Research and Teaching Unit — part of the LFCE’s facilities.

While students may have encountered a calving situation from their previous work in veterinary clinics, the WCVM’s new clinical rotation provides students with an understanding of the conditions during a normal calving and when they do need to intervene.

Julie Domke is a fourth-year student who participated in the first calving rotation. She spent her school breaks working at a mixed animal practice for the past couple of years, but she rarely was exposed to natural births or caring for the calves in the first few critical hours of their life.

“We’re only ever called out when there's an issue, so I've only seen [calf] pulling and C-sections (caesarean births),” says Domke, who is joining a rural mixed animal practice south of Winnipeg, Man., following graduation. “At this rotation, we got to see a lot of natural births and actually help with the neonatal care after. Out at practice, we would just do the C-section and then leave.” 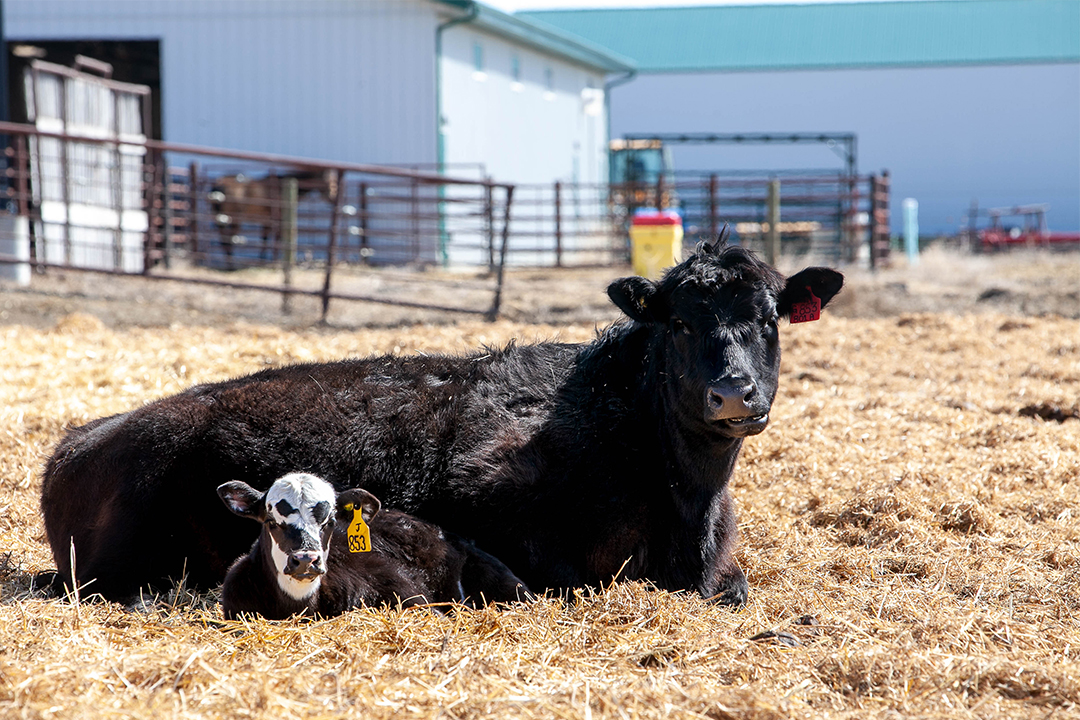 Over the two-week period, the students work with Palmer and the LFCE staff and become more comfortable handling the bovine mothers and their calves. This learning opportunity is ideal for students who have little background with cattle but an interest in working at a large or mixed animal practice in the future, says Palmer. It also provides a chance for some students to get additional exposure to large animals in the final weeks before they finish their DVM program.

“I won't be working with cows, but I think that's still an important experience to get, just to graduate as a well-rounded vet,” says Dani England, a fourth-year veterinary student who took part in the second calving rotation. England will practise in a small animal clinic in Kelowna, B.C., but says she may still encounter a client with horses or a small cattle herd.

During the rotation, the students had the chance to practise vital skills such as anticipating the stages of normal birth (parturition), identifying when they need to intervene, and learning how to pull a calf during a difficult birth (dystocia). After the actual calving, the students ensure that the newborn is alert and can stand. They also make sure that the calf drinks colostrum — its mother’s first milk that includes essential antibodies and nutrients — during its first four to six hours of life. Tagging, vaccinating and injecting vitamins are also part of the daily activities.

“It's just good to have experience outside of the building in general, like real experience …. It's not in a totally controlled situation with a bunch of people, it's like literally here on the farm,” says Erin Carlson, a fourth-year student who will be working at a mixed animal practice in Camrose, Alta., after graduation. 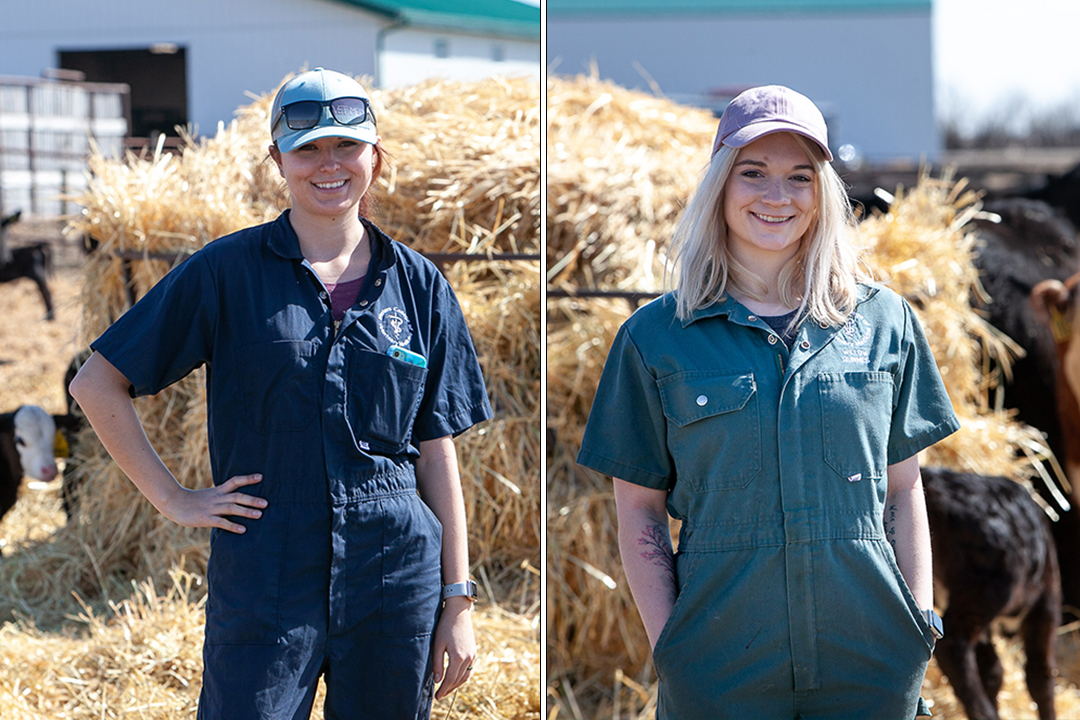 Palmer was instrumental in creating the new calving rotations. The associate professor and theriogenologist (a specialist in reproduction) previously organized the WCVM’s small ruminant neonatal rotations, so he had the experience of how to structure the rotation in a way that engaged the students. As well, the experienced LFCE staff members provided helpful instructions to the veterinary students as their confidence grew over the two-week period.

“I do feel more confident assessing a newborn calf and figuring out if it needs anything, and if so, what it needs,” says Willow Burnes, a fourth-year student who will join a mixed animal practice in Cranbrook, B.C., after finishing her program.

The LFCE’s close proximity to Saskatoon means that the WCVM doesn’t have to set up housing accommodations for the students — part of the challenge when the calving rotation was held out of province. Instead, faculty can focus on enhancing the educational material.

“Being 20 minutes or so from campus, we’re able to really emulate that campus experience and provide that supervision and structure that students need, and that's what's been really delightful about these rotations,” says Palmer.

With the busy demands of keeping up with a large beef cattle herd calving all at once, Palmer adds that he could build additional learning material around the daily tasks.

The LFCE is also the university’s hub for large-scale beef cattle research studies, so veterinary students had the opportunity to interact with USask researchers who were on-site and help them with collecting data.

“It's a really great facility to have on campus with great learning opportunities. The LFCE staff had a lot of knowledge to pass to us and they were great teachers, so we really appreciated everything they did for us,” says England. “I just wish that maybe our school had a bit more opportunity to come out to this facility and see it just because it is one of a kind and we're really lucky to have it.”

Photo 2: A beef cow and her calf enjoy the morning sunshine at the LFCE's Forage Cow-Calf Research and Teaching Unit. The facility's 400 cows and heifers calve in April and May. Photo: Christina Weese