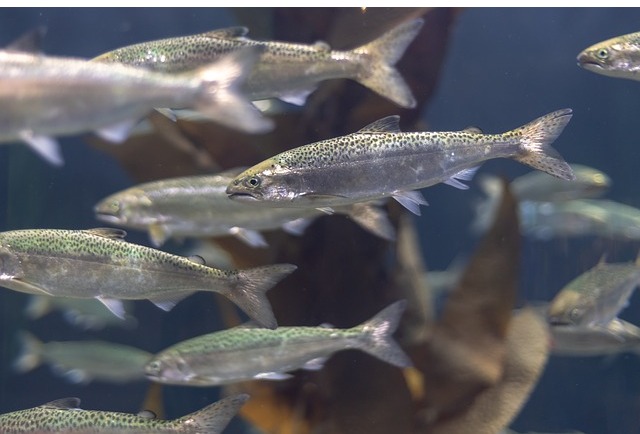 Aquaculture has a growth problem, one that the global company Nuseed hopes to help address while adding value to canola with new varieties high in omega-3 fatty acids.

“Aquaculture has been growing exponentially over the last several years,” says Van Ripley, Nuseed’s Canola Development Lead for North America based in Saskatoon. “It’s predicted to double again in the next 10 years but you have to have the inputs to do that.”

Ripley was speaking to about 300 research and industry professionals at the Canola Industry Meeting and Innovation Day organized by Ag-West Bio in Saskatoon December 5-6, 2018. The event also shared the latest in crop production and crop protection research as well as world outlook for the crop.

According to the Food and Agriculture Organization of the United Nations, aquaculture produces about half of the fish consumed in the world. The industry is expected to increase since wild fish harvests are maxed out, human populations are growing and peoples’ standards of living are improving.

Many of those farmed fish need high-quality food, high in protein and rich in long-chain omega-3 fatty acids such as docosahexaenoic acid (DHA). A key structural component of cells, DHA is vital for human growth, particularly of the nervous system. It’s also sold as a human health supplement.

Fish can’t make long-chain omega-3 fatty acids themselves and crops such as flax and conventional canola only produce shorter-chain omega-3s.

Right now, long-chain omega-3 for aquaculture is sourced from – well, other fish. Ripley explains that wild fish stocks such as the South American anchovy are harvested and processed into oil for fish feed. Countries harvesting these fish have introduced regulatory controls to ensure a sustainable catch.

“That’s really going to cap the amount,” Ripley says. “If you really want to grow the farmed fish industry, where will the long-chain omega-3 and DHA come from?”

Researchers with Australia’s Commonwealth Scientific and Industrial Research Organisation (CSIRO) decided to go to the source. Some marine algae produce DHA naturally. Small marine animals eat the algae, larger fish eat them, and DHA is concentrated up the food chain.

The CSIRO researchers identified a series of seven genes for DHA production and, in collaboration with Nuseed and the Australian Grains Research and Development Corporation (GRDC) moved these genes into canola.

“I really think this is a leading accomplishment,” he says. “We know there are a number of different fatty acids in canola that make it healthy to begin with; this is really about extending that pathway. Adding on to an existing pathway was quite complex.”

Nuseed reports that one hectare of their canola produces as much DHA as 10,000 one-kilogram fish.

Nuseed is now further developing this canola for the world’s different canola growing regions with a view to bringing it to market. Nuseed is maximizing its R&D efforts in both hemispheres through work at its Australian and North American facilities toward this end, as well as continuing the company’s more conventional variety development efforts on traits such as clubroot and blackleg resistance.

Most of conventional canola’s worth comes from its oil, which makes up about 45 per cent of its seed. The leftover meal is about 36 per cent protein, with the balance made up of cellulose, lignin and other low-value components. Most canola meal ends up in livestock rations.

Nuseed’s omega-3 canola could provide new opportunities for canola growers by adding value to the crop and opening up entirely new markets. Ripley explains it is fully deregulated in Australia and has received deregulation approval for cultivation in the US. Applications for registration in Canada, as well as additional global regions, have been submitted.

“Stewardship protocols are strictly enforced, and combined with our thorough registration applications, all global regulatory requirements are being met,” he says. “Canada is a priority market and we are working with regulatory officials to ensure we meet all requirements.”