You might be surprised to know that such delicate-looking bush fruit as haskap (Japanese for Blue Honeysuckle) and seabuckthorn berries flourish in a province with some of the longest and coldest winters in the world. These hardy berries are at the cutting edge of both scientific research and commercialization in Saskatchewan’s growing berry industry.

The berry industry has a short history on the Prairies, compared to, say, Ontario’s Niagara. But University of Saskatchewan (U of S) fruit breeding expert Dr. Bob Bors notes there are advantages here that offset the challenges. For instance, land in Saskatchewan is flat and plentiful, and lends itself well to growing bush fruits. The long sunny days and cool nights in the summer are good for developing good colour and high sugar content in fruit. And thanks to our cold winters, fewer pesticides are needed. It is also relatively inexpensive: an acre suitable for bush fruit in Saskatchewan could cost from $2-4K per acre, while comparable land in the Niagara region could cost $50K. All these advantages allow for more experimental diversification of berry crops. “We have the potential to have very competitive prices,” says Bors.

The haskap bush (indigenous to Canada’s boreal forests) bears an elongated, purplish-blue berry, and a flavor reminiscent of raspberry and blueberry combined, with an added “zing” that likely comes from its high vitamin C content. It is also high in vitamin A and has three times the anti-oxidants found in blueberries, including cancer-fighting flavonoids. The university has bred varieties for mechanical harvesting and different harvesting periods, which begin in mid-June and stretch into early August. With early ripening fruit, low pest vulnerability and ability to accommodate the suboptimal, wet, clay soil of the university lab, haskap is a stellar performer. 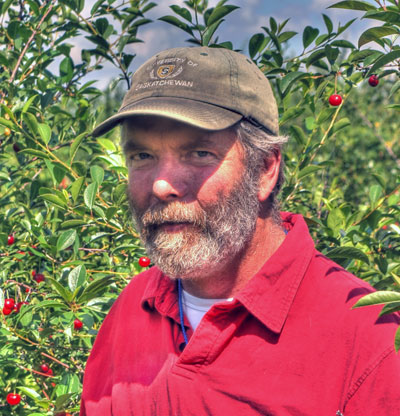 Bors’ collection of haskap germplasm consists of 1200 wild Canadian accessions (a collection of plant material from a particular location) and approximately 230 existing European and Asian lines—a collection he has been building for 15 years, and one of the best and most diverse in the world. He doesn’t worry about research competition in haskap. Other berry programs in North America are limited by comparison: “No one in the world has the diverse collection that is at the University of Saskatchewan.” Just five years ago the program was 90% funded by the Saskatchewan Government’s Agriculture Development Fund program (ADF); now 60% of the funding is through royalties from companies selling the program’s varieties. Bors welcomes producers’ interest to commercialize his findings. (Visit www.fruit.usask.ca for articles about growing haskap) 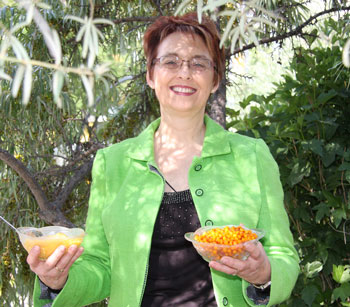 The smaller, slightly oval seabuckthorn berry varies in colour from pale yellow to vivid orange and has a tangy, citrus flavor. Like haskap, seabuckthorn contains more vitamin C than do oranges. Containing more than 190 bioactive compounds, seabuckthorn is sometimes called the newest “superfruit” in the West (haskap is another). Harvested in the fall for food uses, the berry and leaves contain high levels of anti-oxidants and omega fatty acids. For more on seabuckthorn’s nutritional content, see March, 2012 “Bio Bulletin”.

Seabuckthorn is native to Eastern Europe and Central and Northern Asia, and has been grown in Saskatchewan only since the 1950s, when Agriculture Canada distributed bushes to farmers to help reduce soil erosion. It is not widely-known in North America, which is the target market of Betty Forbes, CEO of Northern Vigor Berries. Forbes has grown the bush since 1998 and has been selling seabuckthorn commercially to the food, cosmetic, body-care and pet industries, since 2007. At the retail level, she has been selling the berries, leaves, juice, gelato, fruit leather, purees, jam and other products at the Saskatoon Farmer’s Market, Sask-Made Marketplace and several health food stores since 2010.

Intensive research on seabuckthorn is underway in Indian Head, SK led by Bill Schroeder, Research Advisor of the Agroforestry Development Centre (Agriculture Canada). Through him and through Bors, or by independent study, Forbes will learn how best to extract the berry’s valuable oil; how to grow longer stems on the berries to harvest them mechanically (which would reduce labour costs); and how to develop seabuckthorn tissue to clone identical, successful plants, when seeds and cultivars do not work. With cleaning methods improving, consumers will soon see seabuckthorn products on more retail shelves in the province.

Both haskap and seabuckthorn plants yield harvestable quantities of fruit three years after planting with maximum levels attained after six years. Both types of berries have high potential nutraceutical value, meaning that the fruit can benefit consumers’ health and prevent chronic disease. Their similar status as superfruits could help in marketing efforts. Neither have any serious pests, and both are mildew resistant (seabuckthorn is naturally mildew resistant, while haskap at the U of S has been bred to be resistant), giving them good potential to be grown organically.

While watching for breakthroughs in research, Forbes brokers her own and other growers’ fruit to build on and benefit from international sales. She says that collaborating with other producers is vital: “In my mind we don’t have competitors, because the more people who are out there, spreading the word about seabuckthorn, the more awareness there will be of the benefits and so the more buyers…no one’s big enough to succeed on their own. We need to work together.”

The major unresolved issue for haskap cultivation is determining which of the many excellent varieties should be released to growers. Currently, Bors’ lab is adding nutraceutical evaluation to the breeding project, to determine which varieties are the best to release. Under Bors’ supervision, five nutraceutical compounds have been identified in the haskap berry by graduate student James Dawson. Findings will soon be published in scientific journals.

Bors and Forbes both welcome investment by (and collaboration with) commercial stakeholders, to move research and business forward. Forbes says there is synergy between berry research and commerce: “Science is always the building block for commercialization. Both need each other.”

Local harvesting of haskap and seabuckthorn berries for commercial use will yield more specific synergies: these berries will reduce consumers’ environmental footprint, enable Saskatchewan agriculture to be more self-sustaining, and optimize the use of farmland in the province. Forbes stresses that berry producers can get a lot from a small space: “You do not need a whole section to yield a lot of berries.” Investors and entrepreneurs interested in the berry business are encouraged to participate in this industry–one as robust with potential as the fruit it yields.