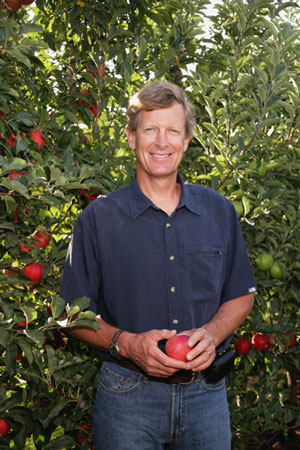 Neal Carter, president of Okanagan Specialty Fruits (OSF), recently delivered a TEDx talk on agricultural biotechnology that outlines the crucial benefits this technology can offer our planet. In addition to founding OSF, a small biotechnology company specializing in novel tree-fruit varieties such as Arctic® apples,

Neal Carter is a bioresource engineer with over 30 years of experience working around the globe. Many of Carter’s projects focused on increasing food security in third world, poverty-stricken rural villages; so he knows firsthand the challenges that these communities face. It was through these experiences that Carter became convinced of the value agricultural biotechnology can offer, not just for increasing crop yields, but also for saving rural communities and lives.

Carter admits that agricultural biotechnology is controversial to some, explaining that most of these opponents have little-to-no knowledge of the subject. He suggests this is largely due to the complexity of the science involved and points to the importance of education to help bridge this gap.

While consumers in Canada and the United States may be content with their food security, third world countries are a long way from achieving a safe, secure food supply of their own. Hundreds of thousands of people die every year from unintentional pesticide poisonings, yet biotech crops have allowed farmers to remove over 485,000 tons of pesticide from their production systems, one of countless benefits that cannot be ignored. Reducing pesticide-related deaths is a clear example of the life-saving potential of biotech crops, but Carter also emphasizes their ability to help improve entire communities’ quality of life.

Billions of dollars of increased earnings have flowed to farmers growing biotech crops, with the majority going to those in developing nations. Even right here in North America, biotech solutions have proven to be effective at saving at least one entire industry from collapse. In both cases, farmers’ livelihoods and their communities benefit.

One of our largest global challenges is the estimated need for at least 50 percent more food by 2030 due to a rapidly rising global population, projected to surpass 9 billion by 2040. Biotech crops not only increase yields to help meet this higher-than-ever need, they can also be fortified with sorely-needed nutrients for the millions of people who are malnourished.

Carter shares a quote that encompasses the importance of the issue from Kenya’s Dr. Florence Wambugu: “You people in the developed world are certainly free to debate the merits of genetically modified foods, but can we please eat first?” At the end of the day, it is important to remember that biotech crops are one more progression in a long history of plant breeding that’s been going on for over 10,000 years. Not only that, but biotechnology can save countless lives in a globally sustainable manner and need to be embraced.

As Carter concludes, “if we can’t embrace a technology that allows us to efficiently and sustainably produce the food we need, we’re never going to be able to feed this planet, and save this planet.”