September 26 to October 3 was proclaimed Biotech Week in Saskatchewan by the Ministry of Agriculture as well as the City of Saskatoon and the City of Regina.

A committee, chaired by Ag-West Bio, was assembled to develop the events for this year.

A couple events have become standards: Biotech & Beer was held for the fifth year, while the Amazing Biotech Race – a scavenger hunt based on the popular TV show – was held at Innovation Place for the fourth year. The following are brief summaries of some of the industry and outreach events. For a complete listing, visit the event page. 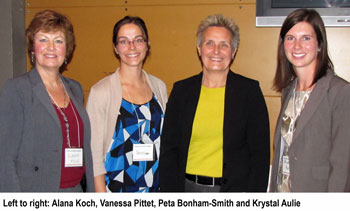 Women in Biosciences was held at Louis’ Pub, University of Saskatchewan, and gave students studying biosciences (agriculture, health, environmental) a chance to network with women with established careers in academia or industry. With a panel that included Saskatchewan’s Deputy Minister of Agriculture, Alana Koch, Dr. Peta Bonham Smith, Vice Dean of the U of S College of Arts and Science, and Vanessa Pittet, Principal Scientist at Contango Strategies, the younger women had many questions, such as how to juggle careers and family, and how to navigate the path from academia to industry.

A few words of wisdom:

It was agreed that more daycare space and family-friendly workplaces would make life much easier for families – not just women. 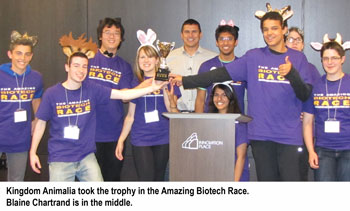 Biotech and Beer ran in the afternoon on October 2nd at Boffins Public House, with more than 80 people in attendance. Ag-West Bio President and CEO Wilf Keller welcomed the attendees and gave a short overview of Ag-West Bio to the committee. Paul Hodgson (Associate Director, Business Development for VIDO-InterVac) talked about Saskatchewan’s role in vaccine development. We were happy to welcome members of the Vaccine Industry Committee who came to network with members of Saskatchewan’s bioscience community. Co-chair of the Committee, Terry Gunter (Director Vaccines Business Unit Canada at Pfizer) also addressed the audience. We were also pleased that Saskatoon’s Mayor Donald Atchison once again showed his support for biotechnology by attending Biotech & Beer and addressing the audience.

The Walking Dead Dance was hosted by Aberdeen Composite School, north east of Saskatoon. Students in grades five to seven participated in this fun, zombie-themed event. The kids had a chance to burn energy, dancing and making shadow puppets in front of a color-strobing screen. They lined up for punch, and unknowingly received cups that were ‘contaminated’ with glow-germ – a special, non-toxic gel that glows under black light. After the dance, hands were checked under black light, revealing who was ‘infected.’ 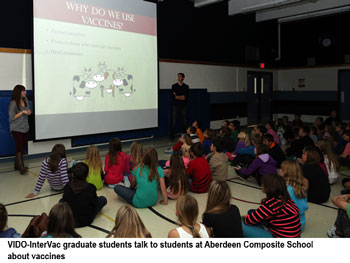 Once the kids settled down, public health nurse Laura Van Loon spoke to the students about the importance of hygiene and proper hand washing techniques, and Glenn Hamonic and Kim Pastl, graduate students at the Vaccine and Infectious Disease Organization (VIDO) in Saskatoon, did a presentation on the safety and effectiveness of vaccines.

At a biotech-themed Café Scientifique at Winston’s Pub, University of Saskatchewan professor Scott Napper presented “Nullius in Verba: The importance of Skeptical Science and Skepticism in Science” to an overflow crowd (around 70 people), which by a show of hands was about half non-scientists. His story-telling and sense of humor kept the audience engaged while he discussed the importance of trusting the scientific method. “We need to be able to show people that science isn’t black magic. It isn’t going to be perfect and we’re going to make mistakes along the way, no doubt about that. But this is the best method we have and people should have more confidence in it.” The event was as part of a regular series, coordinated by University of Saskatchewan researchers Julia Boughner and Issac Pratt monthly on Tuesday evenings.

The Saskatchewan Science Centre brought Biotech Week to Regina again this year, hosting two outreach programs. Create a Dinosaur was the first event of the week, inviting families to investigate the makeup of this organism, one cell at a time. Families worked together to create their own dinosaur by building upon unique genotypes and phenotypes. A Science Café on Biotechnologies was also hosted, with Saskatchewan's Assistant Deputy Minister of Agriculture Janice Tranberg speaking on risk management and genetic modification: “Why do we routinely fear things, such as biotechnology, that science has proven safe?” and Reno Pontarollo, President and CEO of Genome Prairie, with a talk on discoveries and how knowledge changes the way we think and live: “How is the coming together of biotechnology and computer science opening our eyes to new possibilities?”