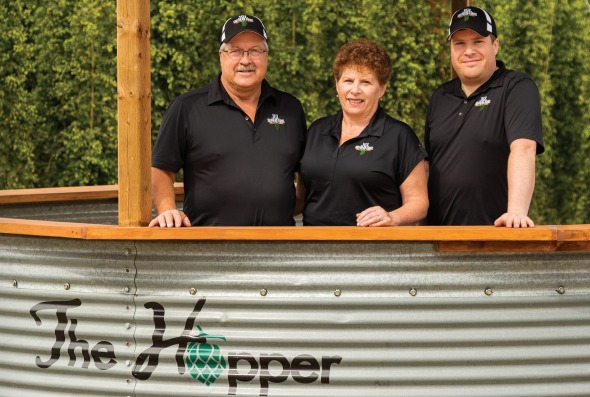 When you think of Saskatchewan farms, fields of golden wheat or yellow canola flowers come to mind. But at JGL Shepherd Farms near Moosomin, SK you will find instead 18-foot-high, vine-covered trellises. The Shepherd family is the first commercial hops grower in the province. “Doing something different wasn’t a worry for me and ultimately my family embraced it as well.” says Justin Shepherd, president of JGL Shepherd Farms.

Hops are native to Saskatchewan and grow wild throughout the province, but there hasn’t been a lot of market demand for the crop until recently. “We needed craft beer to take off in Saskatchewan because that’s the predominant user,” Shepherd explains.
Craft beer has indeed taken off in Saskatchewan—with consumption more than doubling in the last five years—and JGL Shepherd Farms is intent on serving the burgeoning local industry.
“Unlike a crop like wheat, where there’s always a market for it, we’ve had to work one-on-one with brewers and prove our consistency year-over-year to get them to trust us and use our hops,” says Justin. To build that trust, they prioritize quality. “It’s not enough to just be local—we also knew we had to create a high-quality product.”
Being a small grower has some advantages when focusing on quality. For example, a large grower needs to dry their product quickly because of their higher volumes, but JGL Farms has the luxury of drying their hops more slowly using dehumidifiers instead of heat.
They designed and built their own custom dryers, which Shepherd says was a learning experience. “The dryer design changed every year for four years, but I think we’ve found a design we like and they’re big enough to handle what we will produce.”
Shepherd says because they don’t cook the aromas off in the drying stage, brewers using their hops end up with aromas they didn’t know were possible.
“A hop is like a flower,” Shepherd explains. “When you add heat to it, it starts to smell—and it smells amazing—but that also means the aroma is no longer in the hops. Our drying shed never gets above room temperature, so you won’t smell our hops drying and those really volatile aroma compounds stay in our hops.”
This is the kind of quality brewers have come to expect from JGL Shepherd Farms. Being the first grower in the province meant there was a big learning curve.
“We were willing to plant a bunch of varieties to see how they grow and how they work for brewers,” Shepherd explains. “We knew some of those varieties weren’t going to work, but we didn’t know which ones. We wanted to fail quickly and learn from our mistakes.”
He credits some of their success to the strong partnerships the company has built. “We need to access a lot of specialized equipment, which means we need to bring it in from other places, but we have local farm dealers who work with us. And we have a good local soil and agronomy team that helps us.”
They’ve also received support from the local brewing industry, which Shepherd describes as a tight-knit, fun group of people that live and breathe the concept of local. “Overall, it’s just a fun industry to be in,” says Shepherd.
Shepherd recently completed the Agricultural Bioscience Innovation Centre (ABIC) Beyond Entrepreneurship training program, which is managed by Ag-West Bio. The experience brought a diverse group of entrepreneurs together to learn from one another, which he says was extremely valuable. “They may have totally different business models and have totally different products, but they definitely understand what it means to be an entrepreneur.”
“It was my first opportunity to work with Ag-West Bio, to really lean on their expertise and get access to coaching, get access to their great staff and learn how they can help my business. I wish I’d made an effort to get to know them earlier. It has helped me learn how to be a leader and how to be a champion for value-added agriculture in Saskatchewan,” Shepherd says.
Photo: Guy, Lori and Justin Shepherd. The Shepherd family is the first commercial hops grower in Saskatchewan (credit: Andrew March)