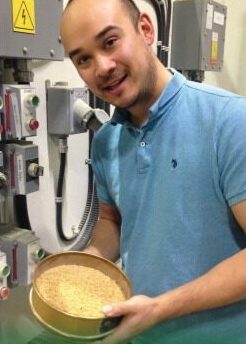 It takes an intrepid Saskatchewan farmer to build a business around a crop that most Canadians have never even heard of. “Fenugreek is not that common in Saskatchewan,” says Nathan Sudom, CEO of Emerald Seed Products. “It comes from India and Pakistan and it’s really not common outside of those two places.”

Fenugreek is used in South Asian cooking, but that’s not what Emerald Seed Products uses it for. Nathan’s father, Blaine Sudom and business partner Cal Kelly launched the company in 1994 to extract fibre from the seeds for use in nutraceuticals.

The idea came from Al Slinkard, an award-winning pulse breeder (now retired) who worked at the University of Saskatchewan’s Crop Development Centre.

“Al Slinkard did the initial development work to bring fenugreek seeds to Saskatchewan,” explains Sudom. “He thought there could be some potential, so he developed two varieties and proposed to my father and Cal Kelly that they start a company to process fenugreek seeds.”

Saskatchewan is now one of the leading producers of Fenugreek outside of India and Pakistan.

While the Emerald Seed Products has been around for a long time, Nathan says the company is “still kind of in start-up mode.”

“It took us a long time to develop a process to remove the fibre from the fenugreek seed in an efficient manner,” Sudom says. “Fenugreek seeds have a really strong odour and bitter taste, so it was a challenge to make sure the fibre didn’t have that flavour profile.”

Until recently, Emerald Seed Products was supplying bulk product to companies in places like Europe, Israel, South Korea, Taiwan, Japan, and the U.S., but Sudom says they’re now trying to move up the value chain by selling a range of supplements on Amazon and in select retail stores in Saskatchewan.

“We’re always learning new things about what our products can do,” Sudom says. “I read a lot of research papers. That’s where it all starts.”

The Saskatchewan Research Council has been a great resource and has helped Emerald Seed Products connect with companies that could potentially use their product.

The company has recently focused on animal feed supplements, which it has sold in several countries, including Canada, but their primary markets are in Europe, South Korea, and the U.S.

“Developing the animal feed supplement market was hard because it was a new product and the industry, especially in the U.S., wasn’t accepting of a new natural product,” says Sudom. “But when the regulations changed in the U.S., and the use of antibiotics became more regulated, a lot of companies were looking for something else to fill that gap. We were well positioned to jump into that market.”

It has been an advantage for Emerald Seed Products to be located in Saskatchewan: the company happens to have an industrial product made from fenugreek that is useful for potash production, and Saskatchewan is the number one potash producer in the world.

“Our product is really good for potash,” says Sudom. “They use it in a process called froth flotation, which cleans the potash and creates a more purified product.”

He says he feels fortunate to have great local people to work with and encouragement from the community. “We get a lot of support from our Avonlea community and they really care about the company.” Sudom says Emerald Seed Products received help from Ag-West Bio in the early days, when his father first started the company and was developing products and manufacturing processes.

Recently, Sudom participated in the Agricultural Bioscience Innovation Centre (ABIC) Beyond Entrepreneurship training program, which is managed by Ag-West Bio.

“Just having access to Ag-West Bio’s networks and getting to know so many other companies has been extremely valuable,” Sudom says. “We’re currently working with another company on a project that uses both of our products, so that’s definitely an opportunity that was created by Ag-West Bio.”