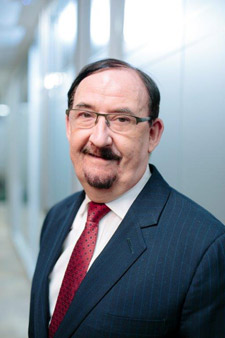 Three months in to his new role as Executive Director and CEO of the Global Institute for Food Security (GIFS), Maurice Moloney is focused on its strategy and long term goals.

With over 25 years of plant research innovation, and leadership roles that have included Director and Chief Executive of Rothamsted Research in the UK—the longest running agricultural research centre in the world—and most recently at the Commonwealth Science and Industrial Research Organization (CSIRO) in Australia where he was responsible for the Agriculture, Food-Nutrition and Biosecurity portfolios, Moloney is excited to lead and grow GIFS as a substantial contributor of solutions to the global challenge of food security.

“GIFS is poised to succeed as a real research institute—more than a funding entity—with real members doing ground breaking research,” he says.

He believes Saskatoon is the right place for it: “Saskatoon is home to one of the most agricultural research-invested universities in the world. And it is right next door to the Canadian Light Source, VIDO-Intervac, the Crop Development Centre, and the Global Institute for Water Security. Adding GIFS to that core group of research entities gives it a high probability of success.”

GIFS is also in a unique position, having received funding from both the public and private sectors. “There is excellent potential to be able to double or triple these initial investments and see significant and value added outcomes,” he says.

Western Canada, Saskatchewan in particular, is a major player in global food security, based on the quantity of food we produce and export. “In a global crisis,” he says, “Canadians won’t starve, but the world will suffer greatly if we don’t look after what we’ve already got and work to increase our yields. That depends on technology and innovation.”

As a scientist, Moloney chooses not to take an advocacy position when it comes to public misconceptions about technology’s role in food production.

"Once you are an advocate for something, it implies that your position is fixed, like an ideological position.This is not good for scientists; we should always keep open the possibility that if some piece of crucial data comes along, you should change your viewpoint. Scientists need to stick to the facts. All of the facts available to us indicate that there is no incremental risk with GM crops and that there are myriad benefits. That set of facts convinces me that we should be exploiting GM crops everywhere."

“I just speak to the history—how technology is key to increasing agricultural production. It always has been. Where we are now is simply a continuum of evolution in agriculture that began thousands of years ago.”

The need to increase food production through technology and innovation has never been more urgent. Food security may seem like an abstract concept for those of us surrounded by fields that make up the breadbasket of the world, but with the global population poised to reach 9 or 10 billion by 2050, we need to increase global productivity by 70 per cent to keep up with demand.

But increasing yields is only half of the equation in Moloney’s philosophy on food security. “I am a strong believer in developing technology that goes directly to developing countries—of technology that can be simplified and repackaged to be of use in the places that are most at risk due to food insecurity.”

He cites apomixis technology as an example. If scientists can develop hybrid seeds that can be saved from year to year without losing their hybrid vigor, areas where food security at risk would have access to free, high quality seeds.

Global shifts in wealth will also lead to a demand for higher quality, more nutritious foods. “There is a mismatch between what people consume and what we could offer,” he says. “We need healthy people in order to thrive when we reach 10 billion. Once you’ve got a more affluent society, brought on by greater food security, it promotes a virtuous cycle of health and prosperity.”

In the meantime, he reminds us that food security and political security are always connected. “The number one thing we have to learn about responding to food security issues is that, while necessary, showing up to a country in crisis with grain trucks does not solve the problem.”

“We need to equip people to feed themselves. Because wherever there is food insecurity, there is political instability. If we don’t deal with food security, we’ll be spending billions fixing other people’s political problems.”

With an eye to the future, Moloney sees GIFS, through proper investments and collaborative partnerships, facilitating leading edge science, crop innovation and commercialization opportunities that will greatly assist farmers locally and globally in applying their efforts to feed a growing world.