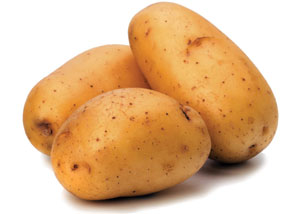 Late blight, caused by the fungal pathogen Phytophthora infestans, is a serious disease that affects potato, tomato and other related crops worldwide. With the capability to vigorously spread and destroy crops, it is a significant threat to producers' livelihoods. These challenges have led Agriculture and Agri-Food Canada (AAFC) scientists to investigate naturally-occurring bacteria for their potential use as biological pesticides (biopesticides). Early on, this project is seeing staggering results, with the top bacterial candidates able to inhibit the disease on potato by over 90%.

Economic impact
Affecting a large industry, late blight is one of the world's single most economically important food crop diseases, and was the major culprit in the Irish Potato Famine in the 1840s.

How late blight spreads
The pathogen spreads by spores, either carried over distance by wind from infected plants or splashed onto plants from the soil through rain or irrigation. The disease can spread quickly in a field – the Latin name very fittingly translates to 'the plant destroyer.' If infected potato tubers are harvested and stockpiled, post-harvest losses are staggering.

Disease management is a moving target
Disease management in commercial potato production generally starts with using disease-free potato 'seed' (that is, either whole or cut tubers), followed by multiple chemical fungicide applications. There is currently a drive for new disease control measures.

Agriculture and Agri-Food Canada research into biological agents on late potato blight
Current conditions have created interest in biological control methods – the use of living organisms to suppress a targeted pest population.

In the first year of a three-year study (2013–2016), lead scientists Drs. Sue Boyetchko and Patrice Audy and their project team in Saskatoon, Quebec City and Guelph, have discovered several naturally-occurring bacterial strains isolated from Canadian soils that have great promise in controlling the disease on potato under laboratory and greenhouse conditions. The top bacterial candidates were observed to suppress or inhibit the disease on potato by over 90%.

"The idea was to select the 'best of the best' bacteria from nature and put them through a rigorous screening program where the environmental conditions were favourable for the late blight pathogen. The best candidates prevailed, even with little or no optimization of their performance with better fermentation and formulation. Dr. Audy and I were astounded by the amazing results."

Further efficacy testing will be done to narrow the list of potential bacterial candidates that are effective on potato and tomato plants. More research will also be done to understand how these bacteria control the disease.

After that, the project team will develop a way to apply this biocontrol to the commercial scale, which includes maximizing bacterial survival and shelf life during storage, promoting fermentation (inexpensive ways to mass-produce the bacteria) and deciding on the ideal formulation for spray application in the field.

Because of the promising results early on in the study, industry has already expressed initial interest in commercializing the team's late blight biopesticide agent.

Key facts
– In Canada alone, potato production represents an annual market value of $1 billion at the farm gate, and an even larger market value of $5.5 billion to the food processing industry.
– Typically, 12-15 chemical fungicide applications over the growing season are required to control the disease.
– Several bacteria strains have shown great promise in controlling the disease on potato under laboratory and greenhouse conditions. The top bacterial candidates were observed to suppress or inhibit the disease on potato by over 90%.