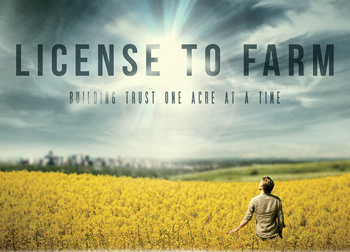 License to Farm was led by SaskCanola in partnership with the film production company, Berteig Imaging, and the film promotion agency, AdFarm. Since its launch in January of 2016, the video has been viewed over 79,000 times on YouTube in over 165 countries and has garnered over two million social media impressions.

SaskCanola Executive Director, Janice Tranberg, says her organization is thrilled that License to Farm has been recognized by the Canadian Agri-Marketing Association. “We knew the film was a quality production but never imagined the impact it would have, so to see its success acknowledged by our peers is truly inspiring.”

Tranberg says in the coming months SaskCanola plans to release several extended interview clips with some of the key experts featured in the full length film.

SaskCanola is a producer led organization, established in 1991 and supported by some 26,000 levy-paying Saskatchewan canola producers. SaskCanola’s mandate is to grow producer prosperity through advocacy, research, and market development.