Learning about agriculture in the city

People learn more when they are having fun, and that is the goal of Agriculture in the City. The Lawson Heights Mall in Saskatoon was busy on April 5 with families learning a bit about life on a farm and the value of agriculture. Jan Cote from Agriculture and Agri-Food Canada chaired the organizing committee for Ag in the City, and says the purpose of the event is to help to spread word about the importance of agriculture. “People drive down the highway in Saskatchewan and see the fields, see the pastures, but don’t necessarily make the connection—that those yellow flowers actually turn into something that you eat,” she says. 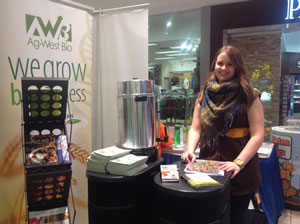 Children found plenty of hands-on activities in the Kid Zone, holding newly-hatched, fuzzy chicks, planting a seed to take home where they could watch the magic happen and many other activities. Rows of tradeshow booths were hosted by a wide variety of commodity groups. On the main stage, visitors had a chance to listen to farmers talk about their operations. They also learned that having a career in agriculture doesn’t necessarily entail driving tractors. Agriculture careers include everything from lab scientists and technicians, to agronomists, nutritionists, marketing, sales, logistics, food production, food processors, and value-added business and more. Local celebrity Mark “Shack” Loshack cooked up a storm using locally sourced ingredients and Saskatchewan entrepreneurs talked about making businesses from value-added products. A nutritionist revealed just how much sugar we ingest in bottled beverages and showed options for healthy meals. 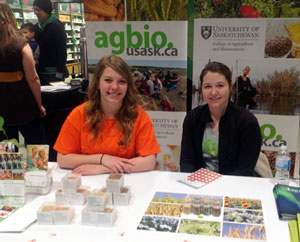 An important new attraction this year was the Science Zone, where local scientists from the Canadian Light Source, Agriculture Canada, Genome Prairie and the College of Agriculture and Bioscience volunteered their time. The hands-on activities and displays included watching (and hearing) live insects, a vermicomposting bin, salty and sweet taste tests, and extracting DNA from peas or cheek cells. Shelley Jones, who manages the Saskatchewan Ministry of Agriculture’s Agriculture Awareness program, says the Ministry sees tremendous value in bringing “Agriculture to the City” of Saskatoon. “Visitors, young and old, gain valuable knowledge about how Saskatchewan food is safely and responsibly produced, the significant role our province plays in feeding a growing global population, and how science enables farmers and ranchers to continue to grow more with less.” 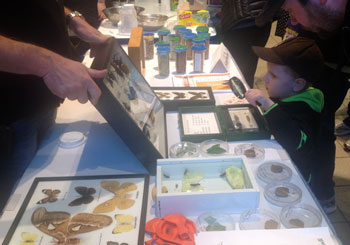 Watch for information about Ag in the City 2015 to learn how you can get involved in this important outreach event. Visit the event website More Ag in the City 2014 photos Careers in agriculture (video from Ag More than Ever website):