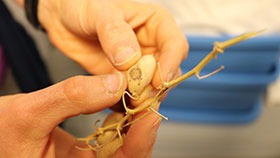 While intercropping, or planting more than one crop together, might be common practice in some types of agriculture, it is not the norm in mainstream Prairie farming, where huge fields of uniform crops dominate the landscape. However, interest in this cropping method in large Prairie operations is increasing. Chickpea intercropped with flax is attracting special attention, including research by Agriculture and Agri-Food Canada (AAFC) scientists and their partners. 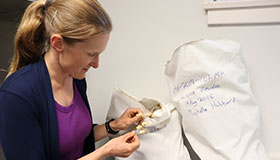 Many Potential Benefits
Researchers and early adopters of intercropping believe that intercropping flax and chickpea could be highly beneficial to farmers. For one, intercropping could act as a form of insurance; if the conditions are poor for one of the crops, the other may still be able to thrive.

Intercropping can also help reduce the risk of severe pest and disease problems. If a field contains two or more crops, instead of just one, insect pests or disease-causing microbes may have a harder time finding their preferred plant to eat or infect. In chickpea-flax intercropping, flax may slow the spread of Ascochyta blight, a serious disease of chickpeas. Chickpeas may have a similar impact on flax diseases, such as pasmo. To better understand if or how intercropping may impact disease, researchers plan to explore whether humidity and temperature in the plant canopy – two major factors in disease – are different between chickpeas grown with and without flax.

AAFC research scientist Michelle Hubbard says, “We are very excited about chickpea-flax intercropping and optimistic that growing these two crops together can help Canadian farmers manage disease, reduce the need for fungicides, grow chickpeas in areas they currently are not able to, and be more profitable.”

Chickpea and flax also work well together for a number of other reasons. One relates to the shape of the plants. Flax plants are upright and relatively narrow while chickpeas are able to spread out and cover the ground. Thus, the two crops seem unlikely to compete for space and light. Furthermore, chickpea and flax seeds are different sizes, making it easier to separate the seeds at or after harvest.

Another potential benefit: chickpeas need drought stress to produce mature, or ripe, seeds. Sometimes this does not occur at the right time, leaving farmers with snow-covered fields of unharvested chickpeas. Flax can take a lot of water out of the soil, creating the ideal drought stress for the chickpeas.

William May, an AAFC researcher at Indian Head, is excited about the possibility of using chickpea-flax intercropping to increase the area in Saskatchewan where chickpeas can be farmed. When chickpeas are grown alone in many parts of the province, they often don’t produce a crop because the seeds never mature.

Another AAFC researcher in Swift Current, Myriam Fernandez, has been running organic intercropping trials since 2016. These trials have included lentil and mustard, field pea and oat, as well as soybean and flax. This organic research has shown some of the benefits that Hubbard plans to look for in conventional chickpea-flax intercrops.

Many Questions
Farmers interested in trying or doing more intercropping need accurate information. This is why Lana Shaw, manager of the farmer-directed South East Research Farm in Redvers, is so excited to start these trials. “I see intercropping as a way to generate diversity and resilience in our cropping system while improving profitability,” she says. “We were happy to partner with AAFC and the Saskatchewan Ministry of Agriculture on this because it extends the reach and scope of both research and technology transfer on intercropping. There are so many unanswered questions and we need all hands on deck.”

Some of the many questions researchers are studying include:

This research is being funded through federal-provincial cost-shared Canadian Agricultural Partnership in Saskatchewan.

For more articles about AAFC scientific achievements in agriculture, please visit the website.