Identifying a common enemy to blueberries, canola and other crops – the sooner the better 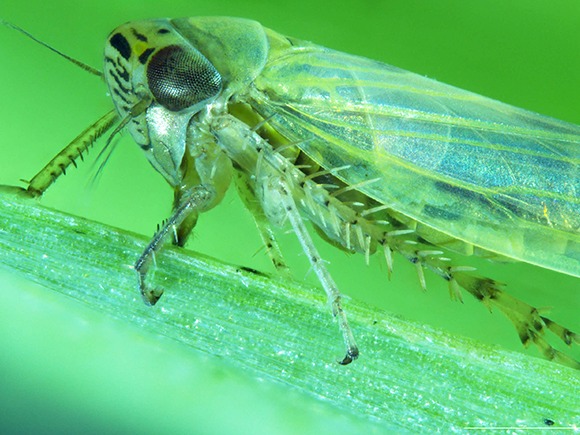 When there is a powerful stain of diseases spreading that can affect the health of crops, producers want to know as soon as possible in order to protect them.

A group of plant diseases, caused by bacteria known as “phytoplasmas” can create yield losses in several types of crops – from highbush blueberries to canola. This affects producers’ bottom lines and the security of our food supply. But the good news: Agriculture and Agri-Food Canada (AAFC) researchers are developing a molecular method to quickly determine the presence of these pathogens early on.

One project being led by Dr. Tyler Wist, AAFC field crop entomologist, and partners in Saskatoon looks at detecting aster yellows (a form of phytoplasma disease) in aster leafhoppers (an otherwise harmless insect) and tracing the migratory origins of the infected bugs that can transfer the disease to plants.

“We know aster leafhoppers are blown through air currents from the southern US each spring,” says Dr. Wist. “So, if we can identify the percentage of leafhoppers carrying the aster yellows pathogen/disease in this migratory population as soon as it arrives in our region – in the spring by surveying the first plants that grow in ditches – then we can give farmers a heads-up on the potential for aster yellows that year so they can plan accordingly.”

Through this project, researchers have developed a new technique that reduces pathogen identification time from one to two days to less than one hour, which is a huge step towards quickly understanding the infection levels in those early-season leafhoppers.

Why is it important to detect the microscopic disease in insects, and not just in the plants? These insects can transfer aster yellows to new plants, which will in turn infect other aster leafhoppers that will then continue the spread.

And why do these phytoplasma bacteria need to be identified early on? Because leafhoppers reproduce quickly. Early detection is key, because controlling the population quickly will help lower the disease transmission in the early stages of the crop’s development, when they’re most vulnerable to the disease.

“Phytoplasma bacteria cannot be grown in the lab, so we have to identify them using their DNA signatures, which normally requires lab-based equipment and procedures. It takes time for us to get samples back to the lab, by which point the insects could have already reproduced and spread the bacteria to their offspring and more of the crop. With this new test we’ve developed and validated, producers can test for the phytoplasma DNA in a plant or insect onsite in minutes and take action sooner,” Said Dr. Tim Dumonceaux, AAFC Research Scientist, Molecular Microbiology

Dr. Dumonceaux has also applied molecular techniques to study blueberry stunt disease, which is caused by a phytoplasma that is closely related to the bacterium that causes the aster yellows disease seen in canola.

In partnership with the teams of Drs. Charles Vincent (St-Jean-sur-Richelieu, Quebec) and Deb Moreau (Kentville, Nova Scotia), Dr. Dumonceaux has developed a quick molecular test to detect the blueberry stunt disease in cultivated highbush blueberries, which is an important fruit crop in Canada. The importance of rapid and accurate disease diagnostics has been emphasized during the COVID-19 pandemic, and this is no less critical for the detection and management of diseases of agricultural significance.

The team’s rapid diagnostic test has been licensed by Harvest Genomics, as well as by the Laboratoire d’Expertise et de Diagnostic en Phytoprotection (for application in Quebec only). The test will be available to producers and agronomists later in 2021. It’s anticipated this will result in a huge improvement in how quickly they can assess their own fields for phytoplasma diseases and prevent further spread.

Aster yellows in canola and blueberry stunt are caused by closely related types of phytoplasma (a type of plant disease-causing bacterium without cell walls). These microorganisms  cause damage to the reproductive tissues of plants and in crops as diverse as canola, flowers, lettuce, carrots and blueberries.
Rapid and in-field identification of blueberry plants infected with phytoplasmas will provide producers with information that can be used for management decisions, including the removal of infected plants in order to mitigate spread. Insect-transmitted diseases are a threat to food security worldwide. Rapid identification of the pathogens causing the disease and the insect transmitting the pathogen is key for protecting crop plants and our food supply.