In a year proclaimed the International Year of Pulses by the United Nations, Regina’s Great Canadian Pulse Off – made up of a social media campaign, public giveaways, and a restaurant contest – drew attention to the extraordinary part played by pulses in Saskatchewan’s economy. The event, staged by Economic Development Regina and the city’s AGT Foods & Ingredients, in partnership with pulse producer Lee Moats and Rebellion Brewing, took place the last week in October.

Five Regina restaurants competed in The Great Canadian Pulse Off to create everything from cassoulet to pasta out of humble lentils, chickpeas and yellow peas. Spokespeople from pulse-related sectors took part in a Power Lunch and panel at Crave Kitchen + Wine Bar. And on Oct. 28th, newly re-elected Regina Mayor Michael Fougere declared We Love Pulses Day amid a whir of media cameras.

The Great Canadian Pulse Off celebrated the fact that Canada is now one of the planet’s largest pulse suppliers, providing 41 per cent of its pulse crops. Saskatchewan grows 90 per cent of the country’s pulse exports, as well as 99 per cent of its chickpeas, 56 per cent of its dried peas, and 94 per cent of its lentils. More than 80 per cent of Saskatchewan’s pulse production is exported to international markets. Lentil exports represent nearly $2.5 billion annually (third most valuable after wheat and canola).

Pulses are truly a Saskatchewan success story. In 1972, the University of Saskatchewan’s newly formed Crop Development Centre launched an experiment to field test lentils in Saskatchewan, Manitoba and Alberta, and a star was born. Nobody suspected that these unglamorous grains would take over almost 7.2 million acres of this province’s farms by the end of 2016. 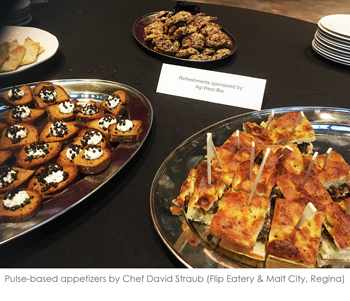 They naturally took centre-stage at an Oct. 28th reception catered by Flip Eatery and Malt City chef David Straub (and sponsored by Ag-West Bio) at the RCMP Heritage Centre – where Minister of Agriculture Lyle Stewart reminisced about his own modest first pulse crop – and an AGT dinner that night. Orchestrated by chefs Milton Rebello and Louise Lu, who own the “seed-to-table” Skye Café & Bistro, the dinner took place in the Henry Newlands Ballroom at Government House. It was attended by a variety of players in the pulse industry, including farmers Lee and Josh Moats, and Murad Al-Katib, the President and CEO of AGT, which has played a large part in the development of Saskatchewan’s pulse industry.

The menu was an eye-opener. Among other dishes, it featured duck confit French onion soup with lentils and beans in a puff pastry crust, and a lentil cardamom cheesecake with green split pea and white chocolate macaron. 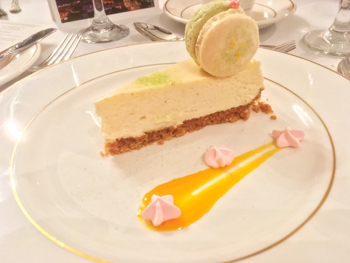 David Froh, VP of Sector Development, Economic Development Regina, was the dinner’s master of ceremonies, with greetings from Mayor Fougere and a brief keynote by Al-Katib. Earlier that day, Al-Katib had presided over a Power Lunch and appeared on a panel at Crave alongside representatives from the Ministry of Agriculture, the Food Centre, the Saskatchewan Trade Export Partnership (STEP), Sask Pulse Growers and Rebellion Brewing.

Al-Katib never tires of singing the praises of this foodstuff, which fixes nitrogen in soil, has a gentle environmental footprint, is a major source of protein and fibre, and is both gluten-free and low in fat. As such, it’s a natural for the health- and planet-conscious millennial consumer. Murad’s brother Omar (AGT’s Director, Corporate Affairs and Investor Relations) pointed out over chickpea fritters on sprouted lentil succotash that pulses can also help to address the problem of feeding the world’s growing population.

The winner of the Pulse Off contest was Victoria’s Tavern, with its White Bean and Lentil Vegetarian Sausage Corn Dog. Many Regina chefs have jumped onto the bandwagon (or the lentil beerwagon); at the reception, Chef Straub told the crowd that he grew up on a farm outside Pence, SK. His father grew pulses early on, and those crops got his family through some lean years.

Straub said he believes showcasing pulses is one of his responsibilities as a chef in this province. But he was surely preaching to the converted when he wrapped up his speech by saying, “Pulses should be part of Saskatchewan’s culinary identity and cultural heritage for years to come.”

Kate Zimmerman is a freelance writer who lives in Vancouver, British Columbia