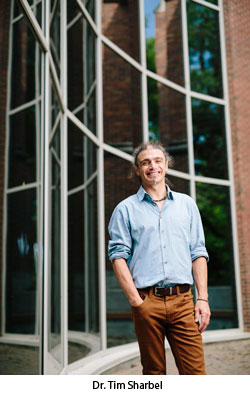 The Global Institute for Food Security (GIFS) has recruited Tim Sharbel as its first research leader, an internationally renowned plant scientist from Germany whose research into a cost-effective way to produce seeds without pollination could improve agriculture and help combat global hunger.

As the new GIFS Research Chair in Seed Biology at the University of Saskatchewan (U of S) and a plant sciences professor in the College of Agriculture and Bioresources, Sharbel will work with colleagues across campus, nationally, and internationally on a crop-breeding tool that could change the way hybrid seed can be made.

Sharbel is a world leader in asexual seed formation, or apomixis. This is a naturally occurring form of plant reproduction where a flowering plant produces seeds without pollination. The plants that grow from these seeds are genetically identical to the mother plant. This trait, which is largely absent in food crops, is potentially of tremendous use for plant breeding.

“Harnessing this phenomenon as a crop-breeding tool could enable hybrids in crops that are currently essentially inbred. It could accelerate development of new advanced high-yielding varieties and ultimately increase yields and enhance food security,” said Moloney.

“For Saskatchewan farmers, this research will mean more robust seeds that result in better germination and increased yields,” said Moloney. “This would reduce production costs and boost farmers’ income. In the developing world, this technology will help subsistence farmers to produce surpluses, which in turn will produce beneficial local economic activity.”

Sharbel brings with him a multi-national team of post-doctoral researchers from Europe and Australia, and he is currently recruiting technical staff and graduate students locally. By the end of 2016, he anticipates leading a lab of about 20 people.

Originally from Montreal, Sharbel comes to the U of S and GIFS from Gatersleben, Germany, where he was a group leader and principal investigator at the Leibniz Institute of Plant Genetics and Crop Plant Research for the past 10 years.

“Saskatchewan is the place to be if you’re in advanced agriculture research,” said Sharbel. “All the companies are here and there is a very strong culture of translation of discovery science. However, work as ambitious as this is only made possible by the generous investment of PotashCorp and the Government of Saskatchewan.”

Sharbel said that his work begins with sampling individual plants in natural populations and analyzing the differences between those that produce sexually versus asexually.

“The plants look exactly the same but the difference is in how they produce their egg cells,” he said. “We then use very high-powered molecular genetic techniques to understand which genes are being expressed in the different egg cells.”

He said that inducing asexuality in food crops would lead to more rapid variety development, as well as the ability to “exploit hybrid vigour in self-pollinating crops where hybrid seed technology has not been feasible.”

“With Saskatchewan producing more than 40 per cent of the world’s lentils and Canada exporting over 20 million tonnes of wheat each year, as well as being the world’s largest exporter of canola, the benefits of this research to Canadian farmers, if successful, could be immense,” said Moloney.

“We are pleased to welcome Dr. Sharbel to Saskatchewan,” said Minister of Agriculture Lyle Stewart. “His expertise will be a great addition to our bioscience cluster, further advancing Saskatchewan’s ability to help feed a growing global population. His research will help produce better crop varieties for farmers not only here in Saskatchewan, but around the world.”