AAFC researchers get an accurate view of Canadian blackleg populations

Blackleg is a severe fungal disease of canola plants, and with canola generating about one-quarter of all farm crop receipts in Canada, it is a serious threat for producers.

Agriculture and Agri-Food Canada’s research and development centre in Saskatoon was established in 1917, and has since become a hub for canola research. That cutting-edge work continues today, especially in the field of disease genetics. This includes blackleg disease, which has been a concern for growers since it was first discovered in northeast Saskatchewan in 1975.

To develop ways for producers to better manage blackleg and protect their crops, we must first have a good understanding of the pathogen that causes the disease. Recently, Agriculture and Agri-Food Canada (AAFC) researchers have achieved a major milestone in getting a leg up on blackleg, by gaining a much clearer picture of Canada’s unique strains.

Led by AAFC Biology Study Leader (Plant Pathology) Dr. Fengqun Yu, a team of Saskatoon-based scientists have recently completed the first large-scale resequencing of the blackleg pathogen in the world. They have used this resequencing to get an accurate view of Canadian populations of the blackleg-causing Leptosphaeria maculans (L. maculans).

Knowledge of the pathogen’s genetic variability and population structure, which can be measured using molecular markers, is key. Armed with this knowledge, researchers will be able to develop new strategies for better crop protection and improved blackleg resistance in Canadian canola crops.

Blackleg in Canada – a clearer picture
Canadian strains have been previously characterized by relatively few molecular markers, which has made it difficult to detect the variation responsible for the pathogen’s ability to adapt. But with the cost of DNA sequencing rapidly dropping, Dr. Yu’s team was able to select 162 strains taken from Western Canada in two separate decades. This allowed the team to get a much clearer view of Canadian populations than ever before.

The results showed that the pathogen populations were composed of three distinct sub-groups and that strains collected from 2012 to 2014 were more genetically diverse than those collected approximately five years before. The sampled populations from Saskatchewan and Alberta were of similar genetic composition, while the Manitoba strains were highly diversified, which makes managing the disease more complicated. The difference in population structure among the provinces may be associated with precipitation, as fungal diseases like blackleg thrive in moist conditions.

In a diversified population, the pathogens have many different genetic backgrounds, giving the disease greater ability to change, adapt and potentially take hold of a crop. This ability to adapt makes it harder to control the disease, so better understanding of pathogen genetics is key to helping growers protect their crops.

“Canola is an incredibly important crop in Canada, and blackleg is one of the biggest disease-based threats growers face. This research is really exciting, because now we have the information we need to really understand the unique genetics and variations of blackleg-causing pathogen strains across Canada. Armed with this knowledge, we can develop modern disease-resistant cultivars and discover new solutions to better help growers protect their crops from this serious disease.”

The ultimate goal of understanding L. maculans is for crop protection and to help growers get a leg up on the disease. For example, it will provide crop breeders with information that they can then use when developing new canola cultivars with increased blackleg resistance. And while crop resistance is important, producers are reminded to follow an integrated management strategy using agronomic best practices such as appropriate crop rotations to give researchers time to stay ahead of the disease.

Planning for the future
The information gained from this study is of interest to blackleg researchers around the world, and the sequence data is being shared for use by the scientific community. The genetic resource provided by this study will help identify genes important to blackleg resistance and better predict new, more dominant races of the pathogen. This genetic information will help ensure we can continue to develop cultivars that are resistant to emerging races of L. maculans, and that canola producers can continue to grow cultivars that remain resistant to blackleg, now and well into the future.

Thank you to Agriculture and Agri-Food Canada for submitting the article and photos.

Photos
Top: A canola field affected by blackleg disease
Bottom: Blackleg at the base of canola stems
Credit: AAFC 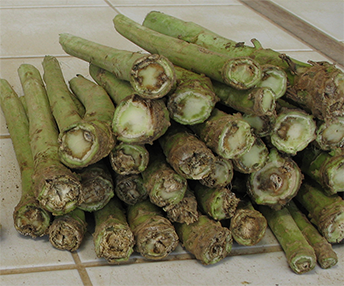