Dr. Kevin Folta on transparency and the GMO debate

US “Right to Know” (US-RTK) is a lobby group opposed to genetic modification (GM), and with the mandate to implement mandatory labelling of foods produced using GM technology. The organization has requested public records (such as emails) going back to 2012, from public university scientists who are engaged in educating the public about GM technology.

Dr. Kevin Folta, a professor and researcher at the University of Florida, is one of the 14 scientists the group has targeted. The following is from a conversation with Kevin regarding the RTK tactics, as well as his thoughts on the role of the scientist and public perceptions about genetic modification. 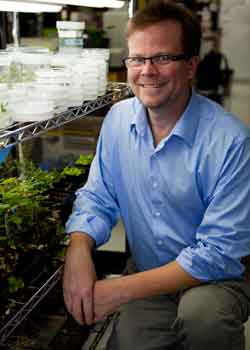 â€‹AWB: What are your thoughts regarding the Right to Know demand?
KF: They are using important transparency mechanisms to intimidate scientists, and dissuade others from participating in the discussion. It’s an enormously expensive endeavour. Everybody has been completely cooperative and excited to provide this material. I know I don’t have anything to hide – I’m happy to talk about it. It takes two things to show that there’s corporate influence in my statements. One is you have to show a connection. Two, you have to show that something was said that would not have been said if it wasn’t for that influence. I think that’s where US-RTK fails. Scientist opinions, and our discussions of the scholarly literature, would be exactly the same if those companies never existed.

AWB: Why did you choose to get involved in the public debate about GMOs?
KF: I didn't set out to get into a debate. I wanted to get into education about transgenic technology and recombinant DNA technology. I didn’t plan to be immersed in a conversation about who hates what company and what company did what. I got into this to talk about cool technology and how it can help farmers, how it can help the environment and consumers.

AWB:  Do you think this is about fear of the science, or is it based in dislike for corporations?
KF: There’s a certain group of people with a philosophy that comes from an anti-corporate basis, hell-bent on promoting organic production, which is fine – but they’ve become militant in their support for alternative production systems and therefore vilify those of us that also support the use of transgenic technology to help farmers.

AWB:  Do you think people trust scientists?
KF: I think overall the public does trust and value scientists. Which is why this is so bothersome, because a very small, vocal minority are painting scientists in a very negative way. They don’t realize the damage that does, because they’re eroding trust in a public resource. When you paint all scientists with a broad brush, say all of our universities are bought and paid for (which is not true) you're saying all scientists – whether they are plant physiologists or working on sustainable organic technologies – are somehow corrupt or questionable. This type of rhetoric is very damaging because we are a public resource – and we are the best line of defence against inappropriate collusion from corporate interests.

AWB: Why do you feel that it's important to defend GM technology?
KF: I think that GMO or transgenic technology is an important tool that will be used going forward. It’s not a ‘save the world’ technology. It is one part of the strategy we will use to feed more people with less input and impact on the environment. I think to stand in the way of a tool that robs farmers (and people who eat food) of a technology that could be very helpful in resolving some of our modern agriculture problems is unacceptable.

AWB: Would you encourage other scientists to get involved?
KF: Absolutely. I think it’s necessary, when we see science coming under attack like this, it is critical that more scientists get involved, that more scientists decide to participate in public education. Because right now when there are only a dozen voices who are actively working in the public space, it’s easy to say “Well there’s only 12 people who are doing this,” when really, we represent ideas shared by tens of thousands. If we could get a few more voices out there to say “Let me answer your questions, let me help you understand this; this is good technology,” it would completely change the equation.

AWB: Do you feel you are in any danger?
KF: I think others would. Several of us have received death threats, angry messages like “We’re going to come to your house and make your family drink glyphosate.” In public meetings I’ve had people get right up in my face…people who have tried to be physically intimidating and imposing. But it doesn’t work with me.

AWB: Do you plan to continue?
KF: We’re going to continue and we’re going to turn up the volume. The response to threats of public disclosure of private documents for no reason has been a chilling one, making scientists (especially early career ones) reluctant to participate in public discussion. I feel the exact opposite. When people start to indict science and make it seem that there’s something wrong with it, that’s when we have to work harder and communicate more effectively to more people. I’m going to find a new level to change hearts and minds, thanks to this voyeur request.

This is potentially a watershed moment. We may be seeing a time in history where we can attract more of the people who are in the middle who aren’t paying attention. People were very turned off by the way climate change deniers went after the climate scientists. And they were very turned off by the way anti-vaxers go after physicians that talk about vaccines. This is the same thing. And I think this is a good opportunity for us to stand up for science and farming.